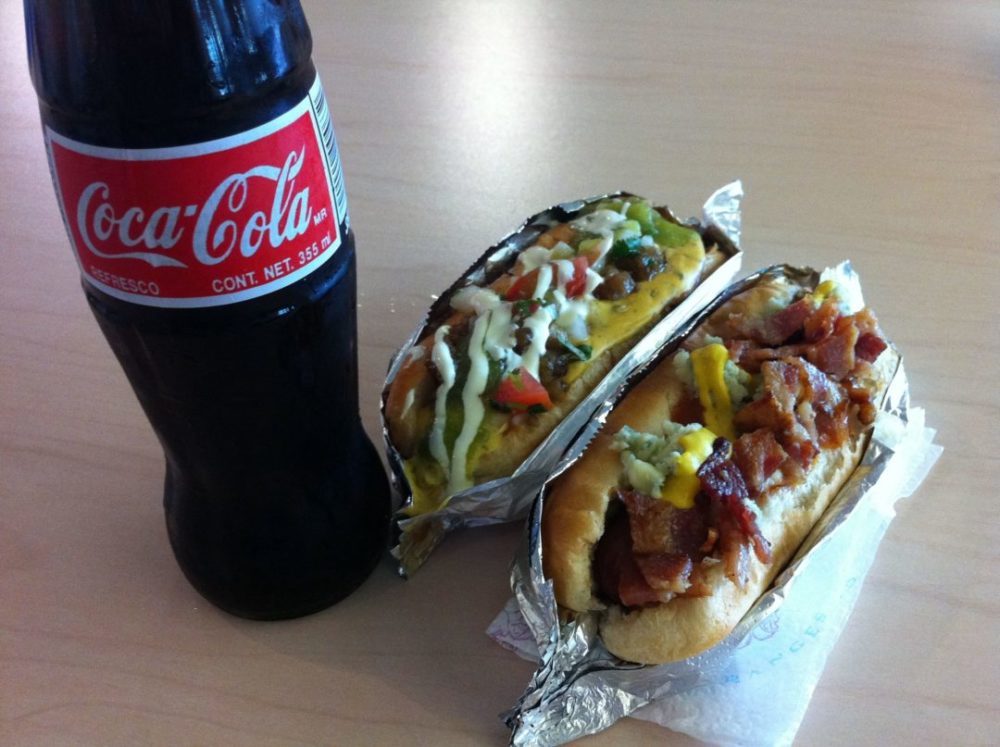 On rare occasions I have a meal where I get so amped up that I have to blog about it immediately. Today I had one of those meals and it was completely unexpected.

Rocker Dogz is a food truck idea by Chef Kris Martinez, except it is not a truck at all. Instead it is a grill that Kris hitches up to the back of his vehicle and takes to cook up some mean hot dogs. Not being a full sized truck, he has a wider range of flexibility where he can set up shop to sell his food.

There was an email on the company list serve today telling us that Rocker Dogz would be cooking out back. I didn’t bring my lunch so a friend and I made our way outside to be some of the first people in line. 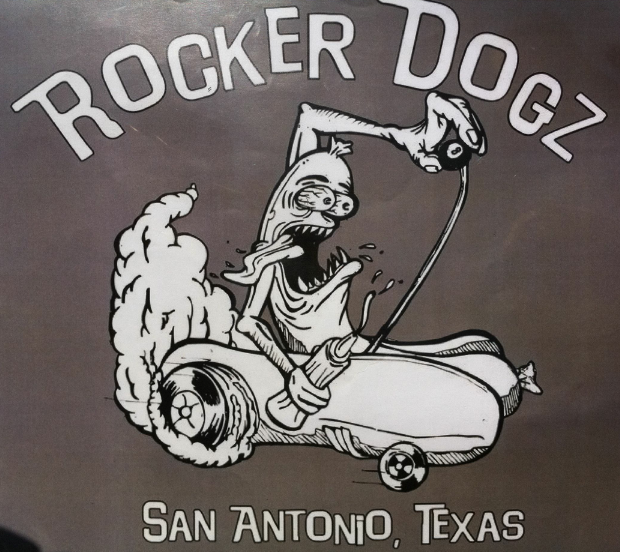 As I worked my way to the front of the line, I got a chance to visit with Kris. Originally from San Antonio, he told me that he was a chef on some of the hottest music acts in the country including the Vans Warped Tour in addition to rapper extraordinaire Jay-Z. He was asked to go on another big rock and roll tour, but decided to try to start up his business here in San Antonio.

While Kris was preparing the hot dogs, he told each customer a little bit about each dog they ordered and what makes them unique. I was impressed at his attention to detail and the freshness of his ingredients; I could only hope that the dogs tasted as good as they looked and smelled.

I decided to start with the Chicano Style Rockero and was blown away on my first bite. The homemade chili was complemented by the poblano queso that made for a really rich sauce. The pico de gallo raised up the heat and provided more of a bite to the lingering spice of the sauce. There was a little drizzle of Mexican crema on top that helped temper the heat. The hot dog itself tasted like one that you might get at a ballgame and was very juicy.

After having the Chicano Style dog, I was fully expecting the Bella Bleu Rocker to be a little bit of a let down. To my surprise it was every bit as good as the first but in a different way. It was chopped full with chunks of blue cheese that further helped to calm the spice from the previous dog. The saltiness of the bacon went well with the smooth blue cheese. Kris apologized that he was out of the spicy onion sauce, but the hot dog was no worse for the wear.

After getting my food, the line had grown exponentially with more and more people going outside after they had heard everyone raving about it. Some folks waited in line up to 25 minutes to get their dogs, but they were glad to suffer through the heat after they took their first bite.

I wish I could tell you where to go to try out Rocker Dogz, but right now there is no set plans of where the cart will be. Since he has been in business for only for several weeks, Kris is working on creating a social media following on Facebook and Twitter where he can update his location for the day.

Don’t delay, follow them today and you’ll not only get one of the best hot dogs that you’ve ever had, but also some of the best grub in the Alamo City.

Value: 9/10 (I know, I know, I HATE to pay over $6-$7 dollars for lunch, and at a price of $4-$5/hotdog you would think I would be complaining about how expensive it is… the fact is, yes, it is a little expensive (I paid $11 for two hot dogs and a Mexican Coke), but you know what, it is freakin’ good)
Atmosphere: N/A (it’s a cart so this isn’t really applicable; however, Kris plays some pretty rockin’ tunes while you wait)
Service: 10/10 (such good service, the head chef will tell you about what makes your hot dog unique as he prepares it and is incredibly personable)
Taste: 10/10 (what can I say, the best hot dog I’ve had in town and some of the best food you’ll find)
Twitter: Follow @RockerDogChef
Facebook: Like Rocker Dogz