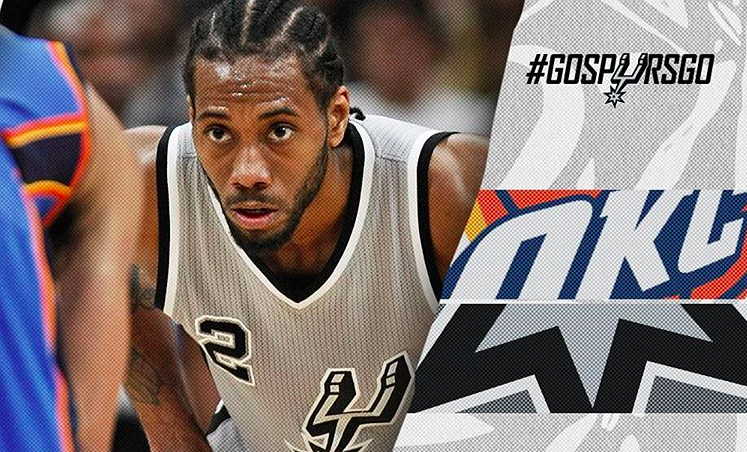 Okay, so the San Antonio Spurs’ first-round meeting with the Memphis Grizzlies was a bit of a sleeper. The latter fought valiantly without stars Marc Gasol and Michael Conley, but the final results weren’t close. The basketball world saw this sweep coming from a mile away.

But San Antonio’s second-round series against the Oklahoma City Thunder promises to be an entirely different story. While these two clubs don’t have much in common stylistically, they both bring something pretty special to the table.

The Spurs’ defense held opponents to a league-best 92.9 points per contest and fourth-best .436 field-goal percentage en route to a franchise-best 67-win regular season. Head coach Gregg Popovich’s team may not have been as offensively explosive as it’s been in recent years. However, the team made up for it with stifling defense predicated upon the interior presence of big men Tim Duncan and LaMarcus Aldridge along with Kawhi Leonard’s second-consecutive Defensive Player of the Year performance.

San Antonio’s once unrivaled ball movement has given way to an increased reliance on putting Aldridge and Leonard in post and isolation situations. But one thing hasn’t changed about this team’s identity: the Spurs remain a remarkably deep outfit that counts on its superior bench play at crucial junctures.

Meanwhile, the Thunder have won with their offense thanks in large part to its duo of dynamic superstars. Kevin Durant and Russell Westbrook each averaged 26 points apiece in their five-game, first-round series against the Dallas Mavericks. The former remains one of the league’s premier swingman and MVP contenders while the latter has defined himself as a prolific triple-double threat from the point guard position.

Under new head coach Billy Donovan, the Thunder remained one of the West’s elite teams, finishing third in the conference with a 55-27 record. Though that was 12 games behind San Antonio’s mark, the two teams matched up pretty evenly during regular-season play, each taking two games this season.

To develop a better grasp of what lies ahead, we’re taking a closer look at the three matchups that will define the series—and making some predictions.

These team’s respective superstars will unquestionably be this series’ marquee matchup from the first tipoff. Durant is arguably the league’s best all-around scorer outside of shooter extraordinaire Stephen Curry. Leonard has quickly cemented himself as the standard bearer for perimeter defense. It’s something of a special occasion any time these two face off.

Who has the edge is another story altogether.

Comparing Durant and Leonard is difficult given the differing emphases of their respective games. There’s little doubt Durant is the more explosive scorer given his ability to go off for 40-or-more points on a good day. Nor is there any question that Leonard can make Durant’s life significantly more difficult, thanks largely to that wingspan, strength, energy and defensive positioning.

Durant will make an impact one way or another, but that impact could be mooted in the event Leonard scores in the 25-30 point range. And that’s the real variable here. Leonard’s relatively newfound well-roundedness on the offensive end arguably makes him the most lethal two-way threat in the game.

Great as Durant has been, the same can’t be said of his all-around effectiveness.

Though Duncan remains a valuable defensive presence, his days as San Antonio’s featured post-scorer are over. That role now belongs to Aldridge, a younger and more versatile threat who can make a variety of midrange jumpers or mix it up in the paint. There’s little question that he’s a more potent offensive threat than any of the Thunder’s big men. The bigger unknown is whether any of those big men can guard LMA.

There’s little doubt that power forward Serge Ibaka can swat plenty of shots, and starting center Steven Adams is known to play some rugged and energetic defense of his own. The key, however, will be denying Aldridge his preferred spots on the court and keeping him off balance. Otherwise, he can (and will) make a number of difficult shots from the baseline or top of the key. If San Antonio’s prized new possession is firing on all cylinders, he should reliably contribute 15 to 20 points per game no matter who or what the Thunder throws at him.

If OKC has any real hope of gaining the upper hand in this matchup, it will require a committee approach. That means that in addition to Ibaka hitting a few jumpers of his own, center Enes Kanter absolutely must be active and productive off the bench. The fifth-year pro actually improved upon his regular-season numbers by contributing 15.2 points per contest against Dallas in the first round. Oklahoma City will need a similar performance to offset Aldridge’s offensive prowess.

The Spurs may have a narrow edge on the frontline, but the difference-maker in this series may well be Oklahoma City’s point guard. Spurs fans will almost certainly tire of seeing Westbrook’s demonstrative celebrations after high-flying dunks and long-range bombs—but that’s a reflection of just how spectacular this guy is. He does it all, and that includes distributing and rebounding the ball.

The same certainly can’t be said of Tony Parker—not during his prime, nor even remotely at this stage of his career. Parker remains an intelligent playmaker and sometimes dangerous scorer, but he’s been lacking in the consistency department this season. San Antonio may not need the same scoring punch with Leonard and Aldridge enjoying their primes, but a little something extra would be especially helpful against OKC’s relentless offense.

Short of Parker experiencing a renaissance just in time, Westbrook will easily get the better of him—thanks to his size and speed if nothing else.

Russ will probably get the better of Danny Green, too. Green will likely be called upon to guard Westbrook in a number of circumstances, but there’s only so much he can do. And with Green’s three-point shot suffering some ups and downs this season, there’s a good chance Westbrook will consistently surpass Parker and Green’s combined scoring output on a regular basis.

If San Antonio wants to keep the backcourt battle even remotely close, it will need Patty Mills to continue the brilliance he displayed during the club’s first-round meeting with the Grizzlies—when he averaged 10.5 points per game and tallied a combined 31 points through his first two outings.

Even with Mills at his best, however, Westbrook is likely to have his way against the Spurs’ uneven backcourt rotation.

Successful as Donovan has been in his first season at the Thunder’s helm, there’s no substitute for Popovich’s vast postseason success. He’s won five titles during the Duncan era and established himself as one of the game’s most savvy coaches. That alone should give the Spurs’ a vital edge should this series go six or seven games—as is likely to happen.

The other important consideration is depth. Kanter and swingman Dion Waiters give the Thunder some proven firepower off the bench, but San Antonio has a wide variety of contributors who always seem to show up at the right time. Beyond Mills, the key names include Boris Diaw, David West, Manu Ginobili and perhaps even the recently-acquired Kevin Martin. This is an established veteran group that was built for situations like this.

Finally, we know defense has a long history of winning championships. And this iteration of the Spurs is one of the best defensive operations we’ve seen in some time. That should count for something—perhaps even enough to earn a matchup with the reigning champion Golden State Warriors (safely assuming they make it to the Western Conference Finals).

Spurs fans should be cautiously confident. This will be a battle, but it’s an entirely winnable one.