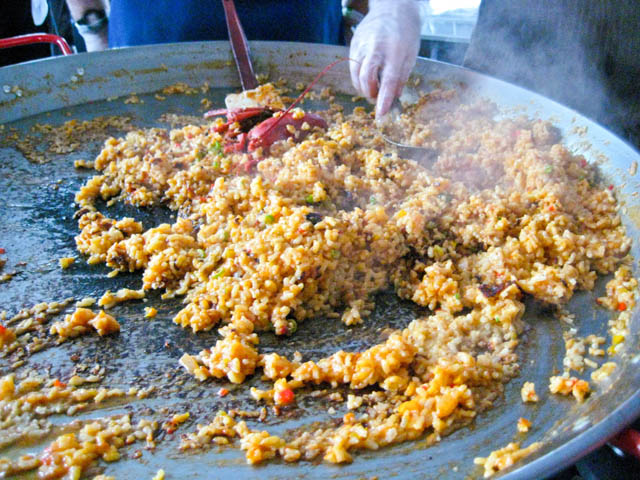 For those of you who missed out on Chef Johnny Hernandez’s 5th Annual Corona Paella Challenge on Sunday, I sincerely apologize. Hundreds of chefs from San Antonio and beyond gathered at the Pearl Brewery to cook up their best recipe in hopes to come out on top of the competition. As for us lucky challenge-goers, we got a chance to try samples from every participant, including a few of San Antonio’s most popular restaurateurs around town. And though the weather was cold and rainy… All you can eat paella? What’s not to love?

Upon walking into the grounds, my sister and I decided to ease into the madness by starting out with the high school competition. Bear in mind I had a lot of eating to do, so I was not able to try them all. But I did taste a sample from John Jay High School, which offered a spicy blend with bell peppers, lobster, mussels, chicken and sausage—a classic recipe to start the day.

Next we hopped over to Memorial High School’s tent. They added peppers, green peas, lemon, lime, mussels and chicken thighs to the mix.

After those two we were ready to take on the big dogs. Chef Jessie Perez of Arcade Midtown Kitchen served up a piping-hot blend with lots of seafood and what looked more like noodles than rice. Whatever it was, it was delicious. And I’m not alone in my opinion—Perez’s recipe won the People’s Choice Award.

Next came one of my personal favorites, a traditional recipe by The Granary’s Tim Rattray. Not only did they offer paella, but it came with a side of their famous barbecue beef! Yes, a side of meat. If that doesn’t deserve bonus points, I don’t know what would. Either way, it’s clear that the judges agreed. Rattray took home first place for a classic recipe.

As mentioned earlier, chefs traveled from near and far to participate in the challenge. Take Chef Jehangir Mehta, who came all the way from New York. Mehta had an assembly line setup with seafood and herbs to top off his paella—fancy stuff.

After that we tried an Asian-inspired recipe from Tuk Tuk Taproom’s David Gilbert. This one took the cake for the most unique presentation, not to mention his (actual) award for first place in contemporary recipe. Gilbert served seafood rice wrapped in a lotus leaf with sour-charred Thai chili dipping sauce. While this one was definitely unique, the flavors were a little too intense for me. Luckily for Gilbert, the judges thought otherwise.

After an hour or two of nonstop paella, Chef Enrique Gutierrez’s station was a welcome sight indeed. We took a brief break from seafood and rice with tacos al pastor topped with salsa verde.

We then headed over to see what Cured’s Chef Steven McHugh had to offer. He also switched it up by serving a rice cracker with house-cured sausage and shrimp salad, along with hot sangria that brought me back for a refill.

Umai Mi’s Jason Dady was still cooking up his paella when we were in the area, but I did get a chance to try his crispy rice salad.  Not sure if it was the strong lime flavor or the crunchy scallops but this may have been my favorite dish to try all day. He later mixed in frog legs with the crispy rice for his challenge submission.

We ended at the Boiler House whose recipe, as expected, was chock-full of weird animal parts. I took a bite of what I thought was chicken and, simply put, I quickly learned it was not. Avoiding said mystery meat, I took a few more bites that salvaged my opinion of the dish.

By then my stomach felt like it was about to explode and we hence decided it was time to surrender. I will definitely be back next year, and possibly fast for a day in preparation. As a first timer at this event, the Paella Challenge was an awesome experience and I foresee it only getting bigger and better in the years to come.

Lindsey is a San Antonio native on a constant hunt for new and noteworthy restaurants, music and nightlife around town.