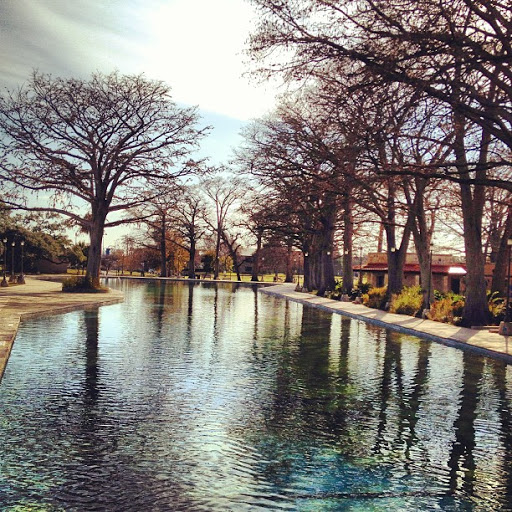 At the end of January, the largest group of instagrammers participatign in the San Antonio Neighborhood Instameet met up at The Cove to take pictures of the San Pedro Park and SAC neighborhood. With the springlike temperatures in the middle of January, The Cove was the perfect place to sit on the patio and grab a beer before venturing out into the neighborhood.

There was a long walk to the park, but that gave plenty of opportunities for folks to take pictures of some of the more urban parts of the city. It was neat to see pictures of older buildings and warehouses contrasted by the beauty of the second oldest park in the nation.

If you haven’t been to San Pedro Park, you should get down there and explore. The land was designated for public use by the Spanish government in the 1700s and is the second oldest public park in the US (the oldest are the Boston Commons established in 1630). Running through the middle of the park is a spring, which feeds into a pool that is open to the public for free in the summer months. Many folks at the instameet had never been to the park and didn’t know about the pool; it is a great place to cool off in the summer and the area is popular with people of all ages at that time.

Surrounding the pool are large cyprus trees which are popular spots to grill out in the summer. Other attractions include the San Pedro Playhouse, San Pedro Public Library, a skate park and a large playground. The park also has played it’s role throughout history: it was located on the well traveled Camino Real. Texas Highways points out that the US Army used the park to test out the use of camels for military transport, that it houses one of the oldest Spanish Colonial structures in the state and that “Sam Houston addressed a throng at the park in 1860, imploring his fellow Texans not to forsake the Union.”

Some folks went out and about into the neighborhoods and got some interesting pictures of the neighborhood and some of the rasquache that, as mentioned in a February Texas Monthly story, Sandra Cisneros finds “uniquely gorgeous about San Antonio as a whole.”

I want to give another shout out to the sponsors of our prizes. Thanks to The Cove for hosting us and provided a gift card for one of the winning photographers! Also, once again a big shout out to Printstagram for providing the winners some cool prizes to print out some of their photos; you can check out The Waspy Redhead’s blog post on how she used Printstagram to help decorate her loft.

If you are interested in participating in the next Instameet coming up on March 2nd, go to the Meetup page and RSVP. Details on the restaurant we’ll meet up at are forthcoming, but the Instameet will focus in on the Brackenridge Park area this time.

Can’t see the slideshow below? Check it out the web album!