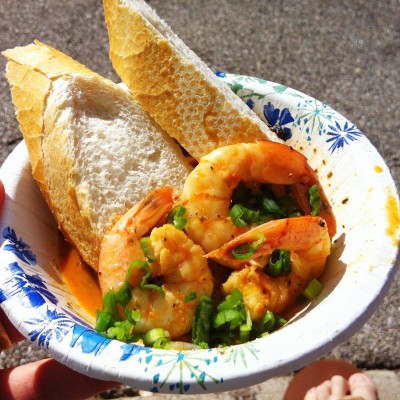 HEB hosted their first ever Food Truck Face Off this past weekend. Four of the hottest chefs and food trucks in town were competing against each other to help raise money for charity. The event was a rousing success, with $19,000 given away to local charities that each of the chef’s supported. The only catch: the chef’s had to use an HEB Primo Picks ingredient in each of their dishes. Coincidentally, I had the same order as the judges’ choices, and here is how the trucks stacked up.

First place, selected both by the judges and the fans, went to Pieter Sypesteyn’s Where Y’At truck. Sypesteyn served up a NOLA style BBQ shrimp recipe that was outstanding. While the shrimp was tasty, what made the dish was the sauce; it was incredibly spicy and when I ran out of bread to sop it up, I had to tilt the bowl back a la Saturday-morning-cartoon-cereal-bowl-style to make sure that I got everything to the last drop. Sypesteyn was awarded a total of $10,500 to donate to his charity, Gordon Pictures, a Christian movie ministry.

Second place went to the Hatch chile nachos served by Jason Dady’s DUK Truck. While there was a snafu at the start with the health department, Dady was able to serve up some hot nachos. Using green chiles, chile flavored chips and some habanero jack cheese, these nachos would be welcomed for any future Cowboys games at my house. The chef was awarded $5,000 to be donated to Culinaria’s new educational center and community gardens.

Third place went to Johnny Hernandez and the mobile La Gloria kitchen who served up some pork street tacos for the hungry crowd. The tacos were good, but one thing that I missed out on was his raspa that judge Jessica Elizarraras particularly loved. Hernandez was awarded $2,500 to be donated to his alma mater, the Culinary Institute of America. 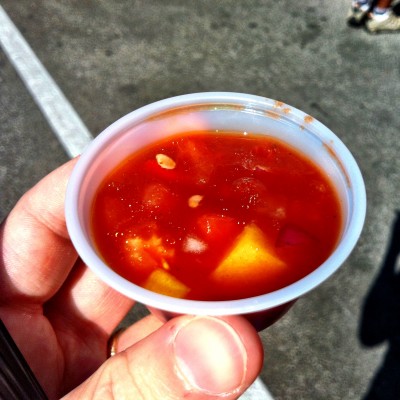 Please note, HEB provided me a gift basket for attending this event.