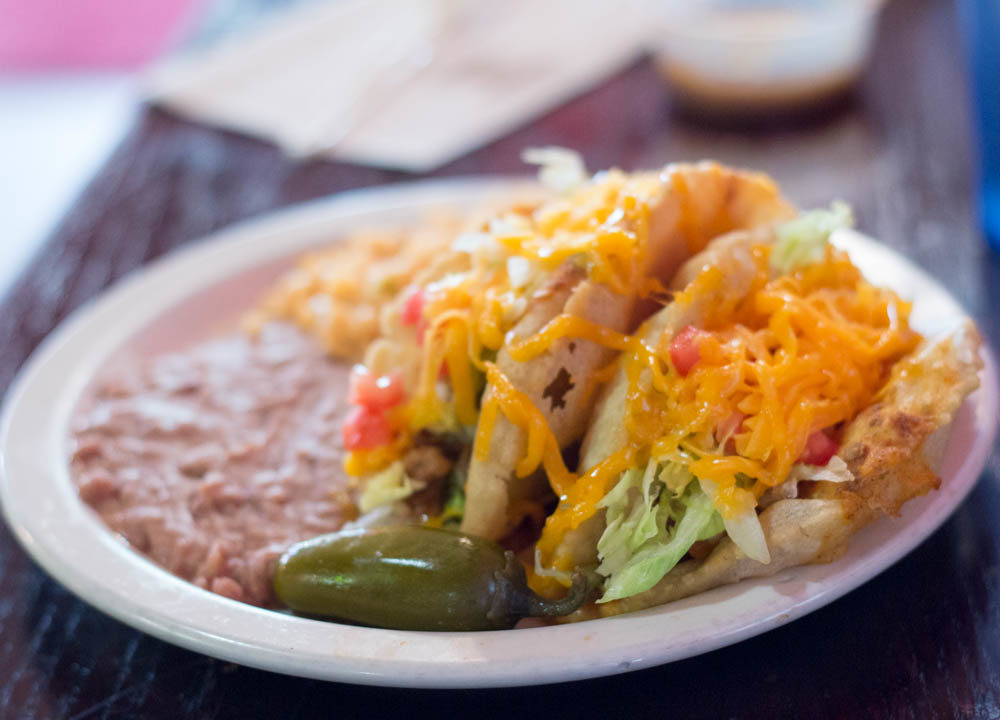 When I found out that some of the taco journalists behind the @TacosofTexas Twitter and Instagram account were in town today, I knew that they had to stop at Ray’s Drive Inn. The home of the puffy taco—that unique lightly fried corn tortilla that puffs up like a cloud and is filled with picadillo, chicken or carne guisada—Ray’s serves some of the best in town.

Yes, Henry may be the most famous puffy taco (I mean they have a mascot at the Missions game!). But for my money you can’t find a better one outside of this Westside staple. So I knew that I had to do whatever I could to get these taco aficionados and their #ChevyTacoTruck out to Ray’s.

After a flurry of tweets, we decided to try and meet at 1:00 p.m.. But due to their numerous planned engagements we like two ships passing in the night and never met. At this time my heart was set on a puffy taco, so my buddy and I decided to go anyway. Ray’s is a classic drive-in where you can flip on your lights outside and have your order taken in your car. However, I like to go inside where there’s a ton of random San Anto trinkets all over the wall (not to mention an altar back at one of the corners).

You’d be a fool to order anything other than a puffy taco on your first visit to Ray’s—if you get more than one you’ll get a pickled jalapeño. A two puffy taco plate with beans and rice will run you just over $6.50 with tax. I go for the picadillo because the meat is seasoned so well. In classic Tex-Mex style, if you ask for cheese you’ll get a substantial amount topping your taco. But what makes it is that glorious, puffed up tortilla. Ray’s Drive Inn must have made a deal with the devil, because somehow that tortilla doesn’t disintegrate—you can hold it through the entire meal.

I talked with the GM Patsy Torres and let her know that the Tacos of Texas folks would be stopping by and gave here a couple of my God Bless Puffy Tacos bumper stickers for her to give to the guys (and one to keep in the restaurant). I love the fact that so many fantastic Tex-Mex items originated in San Antonio and the puffy taco is one of the tops in this culinary canon.

I was delighted to see on Instagram and Twitter that the tacos of Texas folks were able to stop by, get to visit with the staff and have one of the city’s best puffy tacos.

They’re going to be in town for one more day, so be sure to give them a follow on Twitter and Instagram at @TacosofTexas and let them know your favorite spot to get a taco—you never know, they just might go there!