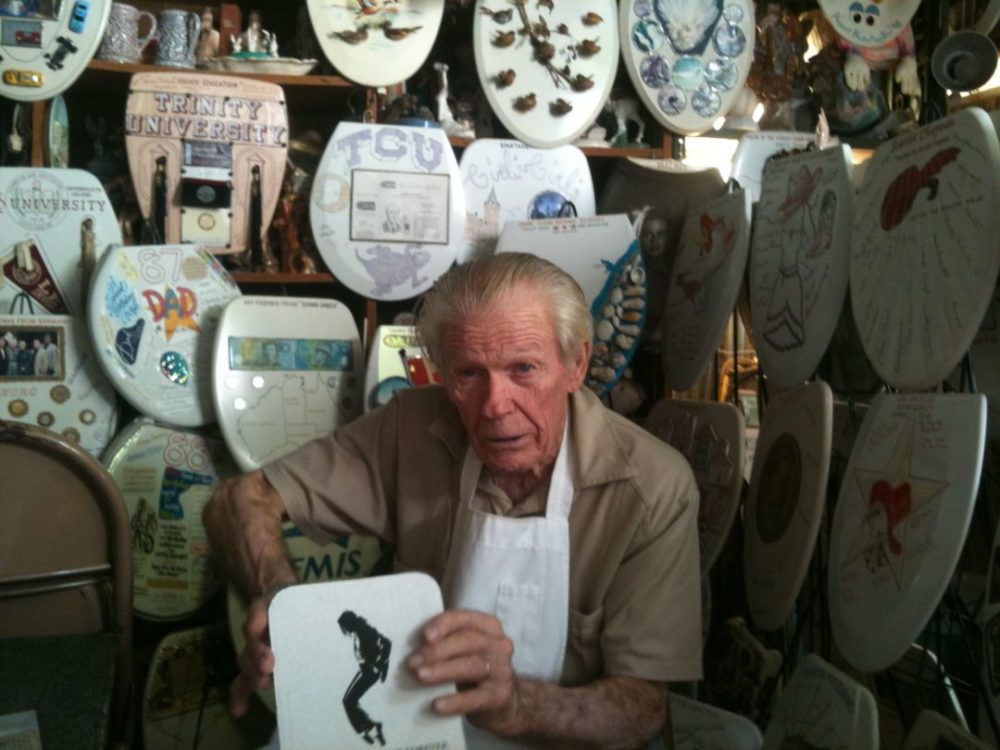 Barney Smith is the second person for us to profile on our weekly Que Pasa segment.  He was born in Eastland, TX and later went to work in the shipyards of Houston, TX.  Mr. Smith married his wife in 1942 and they moved to Tennessee shortly thereafter where he finished school and worked at Lee University.  Mr. Smith eventually found his way to San Antonio where he worked as a maintenance engineer for a printing plant, worked at a local plumbing company for three years, and taught high school for a year.  He then left to start Barney Smith Plumbing which was his business until he retired.  Barney started working on his toilet seats 45 years ago and opened up the Toilet Seat Museum to the public on August 17, 1992.  You can schedule your tour at 239 Abiso, but please be sure to call Barney at 210-824-7791 to see when you can stop by.

There are plenty of museums throughout our city that house impressive works of art, however, none are more eccentric than the Toilet Seat Museum in Alamo Heights.  Barney Smith, the 89 year old resident artist and curator of the museum, is a long time resident of the Alamo City and has been showing his creations to the public out of his garage in the backyard for the past 18 years.

One might suppose that Mr. Smith got the idea for designing and mounting items on toilet seats as a byproduct of being in the plumbing industry, however, this is not where the inspiration came from.  The idea originated from a hunting trip many years ago with his father on some land out by Johnson City, TX.

Mr. Smith’s father had shot an impressive buck and he was hard at work with a piece of lumber, fashioning it into a shield, sanding it, and varnishing it so that he could mount the buck’s antlers on it.  Mr. Smith saw the shape and realized that there was something already out there that could cut out a lot of the work – the toilet seat.

The first things that were mounted on his toilet seats were the antlers of some of the game that he shot.  However, his creativity (or possibly the lack of a big catch) led him to begin mounting different items, trinkets, and Americana on his seats.  Mr. Smith even took to etching designs into the toilet seats, painting them, and sealing them so they wouldn’t get harmed.

This was primarily a passion kept to himself, until one day, he was having a garage sale in his backyard and was selling some of his paintings.  A buyer asked if he had any more, and Mr. Smith took him into the garage in the back to show him more of his creations.  This was also the place where Mr. Smith worked on his toilet seats and the buyer noticed them, complimented Mr. Smith on the work, and said that they needed to be shown.  Contrary to Mr. Smith’s wishes, the man informed the local television stations, camera crews showed up, and the Toilet Seat Museum opened officially to the public in the summer of 1992.

There are over one thousand toilet seats and all tell a story.  There are quite an array of seats including those that depict universities, churches, presidential elections, and Super Bowl games.  There are seats with state license plates that museum goers have donated; visitors can sign a seat of their home state and Mr. Smith will etch the person’s name in at a later date.

The Toilet Seat Museum has received its fair share of publicity being on shows such as The View, Montel Williams, The Tonight Show (where Mr. Smith was interviewed by Tom Green), Bill Engvall’s Country Fried Home Videos, and most recently the museum was visited by Bert the Conqueror of the Travel Channel.  Upon hearing that he did not have a license plate from North Dakota, Gov. John Hoeven sent him an autographed one to mount.  Former San Antonio Mayor Phil Harburger was featured on the 1,000 plate and stopped by to check it out.

The collection is quite random with seats featuring cotton, Chinese Checkers, dominos, Elvis, Fort Sam Houston (the General out there recently signed this one), sign language, a million dollars that was shredded by the US Mint, and ash from the Mount St. Helen’s explosion.  Additionally, there is one with wreckage from the Challenger explosion, another with a piece of the Berlin Wall, and most recently a toilet seat with a piece of Saddam Hussein’s toilet from the green zone of Iraq (no joke; it comes with a letter from the Colonel who got it for him).

When asked what his favorite toilet seat is, Mr. Smith will tell you a story when he was a young boy and had to recite Rudyard Kipling’s poem, “When Earth’s Last Picture Is Painted” in the 5th grade.  He will bring down the seat, give you a copy of the poem, and recite it; this is really one of the best parts of visiting the museum (definitely read the poem on the link I provided).

Whether a resident or visitor to San Antonio, the Toilet Seat Museum is a lot of fun to visit and should not be missed!

Barney really enjoys getting to eat at the 410 Diner right up the road at 8315 Broadway St.  He was originally a volunteer firefighter for Alamo Heights, and to this day he and the other volunteer firefighters will meet once a month at 410 Diner.  Barney advises that you order the Fish Dinner Plate, “I could live on fish,” he says.  With the two sides, he likes to double up on the onion rings and wash it all down with a sweet tea.  About every four months, the old firefighters will take the women out to Earl Able’s where he orders Steak and Gravy, French Fries, and Mashed Potatoes.