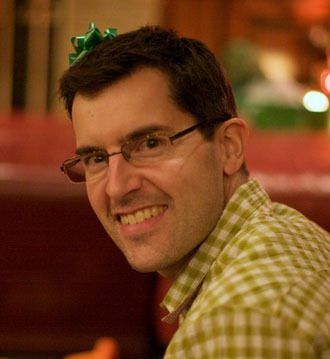 Pat Condon spent most of his formative years in Chicago and San Francisco and eventually made his way to San Antonio to attend Trinity University. Along with two other peers from Trinity, Pat formed an IT Consulting practice in 1998 that created websites and apps. As they created sites and apps for their clients, customers always asked them where they could host what Pat and team created. The team saw the need and began providing a hosting solution that ultimately turned into Rackspace, the leader in cloud hosting.

Pat is passionate about seeing entrepreneurs (and small businesses) succeed and has served as a mentor for many different startups, including FreshBooks, Greenling, Jivetickets, Webmail, Zippykid and Pear Analytics. Recently, he has been helping Graham Weston and Nick Longo create Geekdom, a new type of collaborative workspace where entrepreneurs, technologists, developers, makers and creatives come together to build businesses. This workspace was instrumental in bringing Techstars, a startup incubator, here to the Alamo City. I sat down with Pat over lunch at Tong’s Thai to visit about Geekdom and the emerging tech scene here in San Antonio. Read about some other spots that Pat likes to dine at the bottom of the article.

While San Antonio is known for TexMex, the Spurs and River Walk, one thing that is overlooked is the tech scene. Home to Rackspace, one of the Fortune 100 Best Places to Work and a leader in cloud hosting, a lot of the cloud technologies that you hear of in the news are being developed right here in town.

Additionally, with a population that makes San Antonio one of the top ten largest cities in the country, there are many technology driven entrepreneurs and hobbyists in town. What there hasn’t been, however, is a place for them to come together, create and innovate. That’s where Geekdom comes in. “I’d really like to see San Antonio become a more tech-friendly city.  I think about what would have made it easier for us back in 1998; what would have accelerated us and increased our odds of success. Those are the things that I am interested in being part of creating here in San Antonio. Dirk Elmendorf and Graham Weston (two other Rackspace founders) are equally interested in this sort of thing, so we all have this shared mission of making San Antonio a place where startups can thrive and truly accelerate,” Condon says. Geekdom is just that place.

While Condon was an early supporter of Geekdom, there was another person who was key in making the coworking space a reality. “Nick Longo deserves a lot of the credit for Geekdom. Nick is a Racker and was previously a big customer of Rackspace back in 2001-04 timeframe. He sold his company, CoffeeCup Software, and he moved to San Antonio and started doing marketing work with Rackspace,” Condon says. “Nick got really excited with this Geekdom opportunity and just ran with it and made it happen. Nick has built Geekdom.” 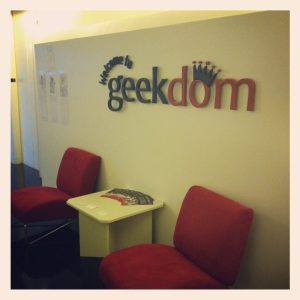 “Geekdom is about creating a place for geeks and makers, people who want to build something. There are pockets of tech stuff happening in San Antonio, so the idea with Geekdom was to create a place where these pockets could get together to create a critical mass of projects in one location.”

One program that has already run at Geekdom was 3 Day Startup, which is a program that helps students learn how to start a company (“If that had been around in 1998, it could have really helped us.”) Additionally, Geekdom is home to different meetups, such as the SA iOS, where people can come to learn new skills. “More than anything, getting these like minded people in one space is what really matters,” Condon says.

The space also housed the first class of TechStars Cloud from January through April. TechStars is a nationally renowned incubator that provides early stage financing and mentorship to companies from across the country. “It’s a great program; it’s one of the top accelerator programs in the country. They attract the best companies, the best startups,” believes Condon.  Teams from all corners of the United States came to San Antonio and officed out of Geekdom while working on their startups. The TechStars Cloud program will be housed at Geekdom each January for the next several years.

Instead of being a traditional coworking space, members of Geekdom are not only encouraged, but required to give back to the community by providing other members with help on subject matters that they are experts on. This requirement fosters a community instead of just an office.

Memberships at Geekdom start at $50 a month, a real bargain if you compare that to other coworking spaces around the country. Those entrepreneurs looking for a permanent desk that they can call home will pay a little more, but the perks include 24/7 access, physical mailing address, parking pass and unlimited conference room use.

In its short existence, Geekdom has already succeeded in becoming the number one place in San Antonio to house the next big thing – instead of waiting to see what it is going to be, get down there and make it happen yourself.

One of Pat’s favorite places to eat right now is The Monterey. Even though the menu frequently changes, Pat likes the pork belly, grilled cheese and Brussels sprouts and washes it down with a Belgium styled beer.

“Il Sogno is great but the hidden gem there is breakfast. The coddled eggs are amazing – it’s eggs, bacon and toast but it is the best you’ll have. They’re fantastic. It’s my favorite breakfast spot in the city.” He said that he will wash it down with a fresh squeezed juice.

You might catch Pat relaxing at the end of the day at The Esquire and might order a Moscow Mule or a Pisco Sour. “The art of bartending comes alive there – real bartenders making real drinks.”