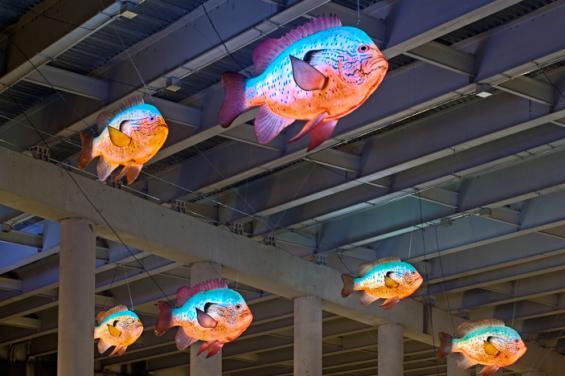 Mike Addkison has lived all over Texas and attended high school in Boerne.  Mike went to UTSA and majored in architecture, but took a variety of classes including art and environmental science. While in college, Mike volunteered at Artpace and helped many of the resident artists with their installations.

Three years ago, the studio director at Artpace saw an opening with the River Foundation that was perfect for Mike and encouraged him to apply. Today, Mike is a project director on the River Foundation’s team and has been directly involved with the completion of the Museum Reach of the river and is now focusing in on the Mission Reach.  After hearing Mike speak at a River Foundation event, I reached out to interview him for the Qué Pasa segment.

Three years ago, Mike Addkison was working as an independent designer and architect when one of his friends, the studio director of Artpace, approached him about a position with the San Antonio River Foundation.  Not in the market for a job, Addkison didn’t look at the posting until he was persuaded by his wife to check it out.

When he finally looked into the position he saw that the River Foundation wanted to hire a project manager with a background in architecture, art, or environmental sciences.  Addkison applied for the job and got called back immediately.

“I came in and learned about the [river improvement] project and realized what a huge impact it would have for the city I loved,” Addkison says.

Addkison has been involved with the implementation of the Museum Reach of the river improvement project and with the planning and implementation of the Mission Reach.  With the Museum Reach, seven major art projects were completed in nine months.  Addkison says that these projects were completed “from start to finish, including design, construction, and installation. Typically public art projects take two to three years.  It was pretty nonstop.”

There are seven under bridge projects installations, but it is impossible for Addkison to name which one he likes the most.   “I can’t just pick one that is a favorite,” Addkison says.  “The one that surprised me the most, however, is the 9th street project by [local artist] Mark Schlesinger.  It is very minimal and very subtle.  I had concerns that it wouldn’t work, but there are some really neat things that happen with that piece if you spend time with it.  There is some neat poetry that happens with light and water in that space.”

Being involved with planning, Addkison can generally visualize how pieces will look when they are installed.  However, with such a short time line he really didn’t know what the giant fish by Donald Lipski were going to look like under the highway.

Addkison recalls “when we got them all up and wired to the electric system, it was about 2:30 in the morning.  There was no one around except the artist, the crew, and myself.  We pulled the trigger and lit them up and it was absolutely amazing.  It was really pretty impressive and we were running around jumping up and down.”

The forthcoming Mission Reach stretches a total of eight miles and is divided into three unique phases.  One of the key features of the Mission Reach is that artists will create a portal, or physical connection, that ties the different Spanish missions to the river.

“Figuring out a way to get people from the river to the mission and tying those features together was really important and we wanted to help contribute to make that happen,” Addkison explains.

While the River Foundation is a nonprofit organization and could always use donations, there is another thing that folks can do to help out.  “Spread the word,” Addkison advises.  “This is a huge gift to the citizens of the city and for tourists who visit.”  The river improvement project will have a cultural, community, recreational, health, environmental, and economical impact on our city.  “Getting people down there and walking on the river, that’s when they get it.”

Mike had a ton of suggestions of where to eat, but I only had room to write down a couple.  One of his favorites in South town was Cascabel, an interior Mexican food restaurant on South St. Mary’s where he orders the black bean tlacoyos, “They’re almost like a little fried black bean dumpling and have cabbage and sour cream.  They also come with nopalitos and rice.”

If Mike ventures a little north of downtown, he has to stop by Rolando’s Super Tacos to get a vegetarian super taco.  “Man, I love that thing.  It’s so bad for me but it’s so good.  At least once a month I have to get one, but I’m pretty much dead to the world for the next two and half hours.”