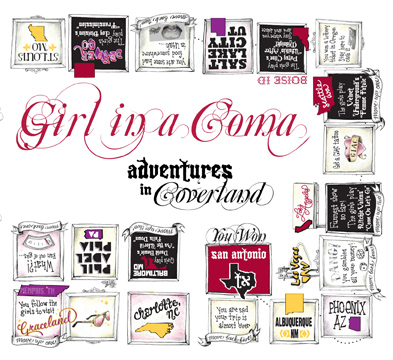 Jenn Alva is the bass player for Girl in a Coma, a San Antonio trio that also features sisters Phanie (drums) and Nina Diaz (guitar and vocals).  In addition to playing in the band, Jenn is also a budding film maker and has made her directorial debut with the band’s video for “Walkin’ After Midnight” off of their latest album released in the middle of October, Adventures in Coverland.  I recently got to visit with Jenn on the phone, and I will say, I was little nervous as (1) I am not good at interviewing people on the phone and (2) always get a little starstruck visiting with musicians.  In spite of that, she was incredibly nice and very easy to talk with.

Girl in a Coma takes their name from a Smith’s song “Girlfriend in a Coma” and surrounds the sultry vocals of Nina Diaz with a range of musical styles from driving punk to vintage rock riffs.  Currently, the group has three albums under their belt, including the most recent one Adventures in Coverland.

Some people might wonder why they chose an album of covers for their latest release.  Jenn Alva explains that “we were just thinking how can we tie in back to our second album, Trio BC, so we thought we could do a cover album and explain why our album is so random, with all our influences.  It was just something to do for fun in between writing the third album.”

But Girl in a Coma didn’t just cover any song, they wanted to record songs that they both loved and could make their own.  “All three of us made a list and then [asked], “What can we pull off?”  For example, Nina was working on a Pixies song “Where Is My Mind” and then [realized], ‘I really don’t want to change it,’ so we didn’t do that song.  We didn’t do Rufus Wainwright, we didn’t do Elvis.  We wanted to do the songs we could change up a little bit,” says Alva.

These efforts resulted in an album of songs that is diverse in both artists covered as well as the styles in which the trio plays the songs.  The album has a Latin influence with “Si Una Vez” by Selena and “Come On, Let’s Go” by Ritchie Valens.  “Si Una Vez” starts with a nice merengue beat laid down by Phanie before Nina accelerates the tempo and delivers the chorus with a driving force.

There is a couple of classic rock songs including a timely interpretation of Buffalo Springfield’s “For What It’s Worth”.  While abandoning the laid back beat of the original, the band is more vocal in asking listeners to examine what is going on around them.  Alva lays down a nice bass line throughout the song and provides the backup vocals.  The song culminates when Nina delivers the classic line “Paranoia strikes you deep/Into your life it will creep/It starts when you’re always afraid/You step out of line the man come and take you away”.  Seeing the force that the band played this song live at Josabi’s makes you know that there is something in the current social/political landscape that has them riled up.

David Bowie’s “As the World Falls Down” allows the band to set down a groove with the drums and lingering guitar chords reminiscent of a ballad from the 50s/60s, complete with some “bop-bops” by Alva while Diaz croons.  The voice is so sultry and instrumentation so lovely that you can’t help but want to have someone to fall in love with regardless if it might “make no sense at all.” To top it off, San Antonio native Robert Rodriguez (Desperado, Sin City) directed the trio’s video (additionally, the track “Yo Oigo” of the latest record appeared in Rodriguez’s movie Machete).

Diaz gets another chance to show off her pipes when the band covers Patsy Cline’s “Walkin’ After Midnight.” Alva made her directorial debut filming the music video.  She said that Elvis’ song “Big Love” in the movie Roustabout served as inspiration for the shoot.  “My dad is a big Elvis fan, he’s crazy about Elvis.  My father would do Elvis impressions when my friends came over and I would be embarrassed.  I started getting into rockabilly music and you just have to love Elvis.”

While this was Alva’s first major production, she has enjoyed filming things for quite a while.  While on tour, she shoots horror comedy shorts as a way to have some fun and relax on the road.  She plans to release some on a DVD in the near future.  There is an obvious talent and hopefully she will be able to produce more of the band’s videos in the future.

Girl in a Coma is hard at work writing songs for their upcoming release.  Alva said that Diaz is working on lyrics and often will pass along a rough cut so that she can start fooling around with the bass line.  “She gave me a song last night, it’s an amazing song, it’s very T-Rex-ish.  I can’t wait, it’s a lot of fun!”  The band plans to wrap up writing their new album by the end of the year and be in the studio in January or February.

Girl in a Coma is a San Antonio band and they are proud of it.  Like all artists, they were anxious to explore the world outside their hometown, but after their first major tour in 2004 took them around the country, they realized how much they love where they’re from.  “You don’t know what you have until it’s gone.  After coming back from our first big tour, meeting new people, seeing new areas, and coming back home we really [felt that we] do have something special in town and we’re never going to leave.”

Thank goodness, because our city is that much richer for the music that they are making.

“When we get back home, what I like to do first is go to Las Brasas, a little hole in the wall Mexican food restaurant off Vance Jackson.  There is nothing like San Antonio Mexican food.  It can be good in LA, but it’s different in LA, it’s different in Arizona, it’s different in New Mexico, and anywhere else they’re just doing it wrong.  Las Brasas is just so cheap and it is 24 hours.”  Alva says that you have to order the cheese enchilada plate.  For a local watering hole or a place to just chill, Alva advises to go to Martini Ranch on West Avenue.