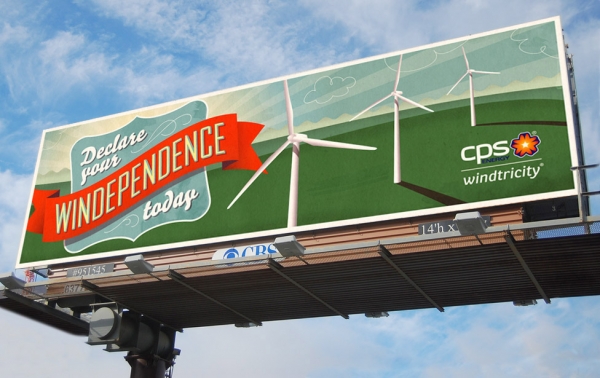 Jamie Stolarski was born and raised in San Antonio and graduated from Robert E Lee High School.  After graduation, Jamie took classes at San Antonio College (SAC) in a range of subjects including fine art and photography.   While attending SAC, he began working on his skills as a visual artist in oil painting, but has always been interested in letter forms which ultimately led to an interest in graphic design.

After working at the San Antonio Express News and several advertising agencies in town, Jamie set off to do his own thing as an independent designer.  Jamie is the artist behind the Spurs veladora, and after reaching out to him to post the image on my blog, I browsed through his portfolio and was very impressed with what I saw.  Jamie and I met up over a couple of drinks to talk art, design, and San Antonio.

If you are a resident of San Antonio, you are probably familiar with Jamie Stolarski’s work but may not have ever heard his name.  Stolarski is a talented local designer who has been responsible for the Silver Stars and San Antonio Rampage logos, the re-branding of the CPS Energy logos, and the CPS Windtricity campaigns seen around town.  However, were it not for a freak accident, Stolarski might not have ever become a graphic designer.

While attending SAC, he took a girl out ice skating where he fell and broke his arm.  He was unable to perform his duties as a waiter and could not go to work.  However, instead of staying on the couch and watching Judge Judy, Stolarski spent the next couple of months devouring Photoshop and Illustrator books where he found a passion for graphic design.

This new found love led him to a stint at Kinkos where he learned via trial by fire how to apply his theoretical skills to create something that a customer wanted.  “[Working at] Kinkos taught me a lot about practical aspects of design, how you are limited by time, effort, and money,” Stolarski said.

After cutting his teeth at Kinkos, Stolarski worked on designing print ads for the San Antonio Express News, which led to him becoming an Art Director and Creative Director for Creative Civilizations, and then a Creative Director at KGB Texas.  In the summer of 2006, Stolarski realized that he hadn’t had a summer off since middle school and took a sabbatical to find a new direction when people started asking him to work as a freelancer.

Stolarski’s first big gig was to create illustrations for Hoop, a magazine that covers professional basketball.  He was given a lot of creative leeway, and the editor was looking for something new and fresh each time.  Stolarski was not confined to a “house style” and was able to produce fresh images each time.  This high profile gig helped to put his name on the map.

Rarely do artists get their work in the public eye on a daily basis, but Stolarski has done just that.  While a Creative Director, he was in charge of re-branding the logo for CPS Energy.  Recreating an image of a company is an arduous process because that image is so tied in the minds of the consumers along with the fact that it can be difficult to get all stakeholders in agreement on what the image should convey.

To combat this problem, Stolarski got each member of the CPS Energy team to go through a drawing exercise to get a baseline vocabulary.  Each person would have to draw a picture for a particular word that Stolarski gave them.  He asked them to draw harmony, contrast, isolation, strength, stability.  While each drawing was subjective in nature, something interesting began to happen.  “Creating a logo/image is like abstract painting.  What’s important is how it resonates with people.  While everyone has their own opinions, there exists some baseline truths,” Stolarski said.

This exercise helped Stolarski create the image for what CPS Energy wanted to convey.  “[The logo] needed to feel stable and reliable, yet still dynamic. Also, it needed to abstractly represent the concept of ‘energy’ in a unique way,” Stolarski said.  CPS liked his worked and has since contracted him out to create their Windtricity campaign to promote the consumption of electricity from renewable resources.

Stolarski’s interest in art extends well beyond graphic design.  One medium that he is particularly fond of is collage and he recently had an exhibit at the Southwest School of Art.  “Drawing seems permanent but collages don’t.  I love the fun of ephemera and like to locate and apply them to art,” Stolarski said.

This love of the fleeting has led Stolarski to work on a project of projecting his grandfather’s slides on different interiors, collecting images of shoes on telephone wires, acquiring random CMYK test prints on cereal boxes, and keeping security envelopes where he said that he “like[s] the different patterns, colors, and designs of [them].  They are interesting, tactile, and all different.”  Many of the items that Stolarski keeps could potentially show up in future works of art.

With an eye on the temporary and the ability to create lasting images for companies and brands, Stolarski’s work will be in front of the eyes of San Antonians for years to come.

When asked where his favorite spots to grab grub in San Antonio are, Jamie started peppering me with a bunch of questions. “What type of food? What part of town? What day of the week? What’s the occasion?” Those were just a few of the questions he threw back on me because he said it was impossible to have a favorite restaurant in town.  I realized we were cut from the same bolt of cloth.

To help him narrow down his choices, I gave Jamie a scenario where he had a couple of friends who came to San Antonio who had never been here before and had the opportunity to eat out for two dinners and asked where he would take them.

After thinking about it for a while, Jamie said that the first restaurant he would send them to was Rosarios where they could order Enchiladas de Queso along with Tlalpeño Soup, “it’s like chicken soup but its super restorative, it’s great for hangovers,” he said.  Jamie suggests washing it down with a michelada, which he considers one of the best in town.  “Get the Dos XX green bottle beer, but if you can, order it with a Victoria, that’s the best.”

Jamie also suggests going to visit Saigon Express on McCullough.  He says that the Number 4 Pho with well done brisket with rare flank steak is delicious.  He cautions that you should “be sure to order the small, if you ask for the large you better have two other people with you.”

If you are interested in hiring Jamie to do some freelance graphic design work for you or your company, visit his website at http://j-sto.com or you can contact him at jamiesto{ at }gmail.com for more information.