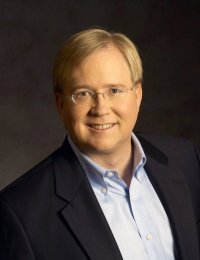 Graham Weston is a native of South Texas and grew up in San Antonio.  When he was in the seventh grade, he moved to Marion to live on the family ranch.  Growing up, he participated in the San Antonio Stock Show and later graduated from Texas A&M with a degree in Agricultural Economics.

A serial entrepreneur, Graham started a business in college and ultimately became involved with real estate.  In December of 1998, Graham became a founding investor in a small startup called Rackspace.  Rackspace Hosting has turned into a publicly traded company employing thousands of Rackers (employees of Rackspace) around the globe.  Graham Weston was recently one of the tri-chairmen of the SA2020 initiative by Mayor Julián Castro.

Rarely does government, industry, and the general public work together to improve the overall well-being of a city.  The SA2020 initiative aimed to get all three groups to put forth a vision for what San Antonio could look like look like in ten years.  Wanting to make sure that local industry was well represented, the mayor of San Antonio asked Graham Weston, chairman of Rackspace Hosting, to be one of the three chairs for the SA2020 project.

SA2020 harkened back to a program in the 1980s by Henry Cisneros called Target 90 that was aimed to bring major improvements to the Alamo City before the end of the century.  “San Antonio was really a very different city [then].  We were a sleepy backwater city.  Today, we are a major city and one of the more prosperous cities [in the country],” Weston says.

To become even greater and overcome some of the current issues, the San Antonio community was engaged in several sessions aimed at developing a roadmap for the city.  An issue that Mr. Weston is most passionate about is ensuring that everyone receives a quality education.

“We have to lead a turnaround in the education system in our city.  I really think that there is not even a close second.  We must become a leader with educated citizens.”

With the budget cuts at the state level, Mr. Weston believes that San Antonio cannot count on the state or federal government to provide the solution to the education problem.  “We must take the initiative ourselves to do what is necessary.  My vision is [for] San Antonio [to] decide that education is something that we must prevail in,” Weston says.

To help this vision, Mr. Weston has ensured that Rackspace Hosting is doing its part to help the community.  Recently, Rackspace relocated its headquarters to the abandoned Windsor Park Mall in Windcrest, Texas off of Walzem and I-35, and Mr. Weston wanted to get involved with the neighboring community.  He made it his goal to make the surrounding schools, termed the “Magnificent Seven,” become some of the best in the state.

Rackspace Hosting became directly involved in many of the schools where Rackers, or employees of Rackspace, are involved with the Big Brothers and Big Sisters Programs at Roosevelt High School and the schools that feed into it.  Furthermore, Rackspace Hosting sponsors many programs designed to help students of the “Magnificent Seven,” including City Year, Communities in Schools, Gemini Ink, and Youth Orchestra.  They also sponsor a chess club that is open to both students and the community at large.

“We find programs from organizations that we think are worthwhile and go to the school district and see what they think,” Weston says.  He feels that it is important to hire organizations with an expertise in education, much like customers hire Rackspace Hosting to provide a solution to their IT Hosting needs.

[Video with Mr. Weston and NowCastSA]

Instead of focusing on  students’ weaknesses, Mr. Weston feels that it is paramount to focus on their strengths and to give them encouragement.  “Schools are generally very weakness-focused.  Whether it is music or writing, those are both things we are trying to bring out.  Let’s bring that talent, that strength out.”

At the time of this story, a draft of the SA2020 final report was released to the public.  The report identified 11 topics that Mayor Castro should focus on including:

The next step is to take the priorities from these meetings and inspire individuals, companies, and the government to take action on them.   Getting folks to rally around the areas of focus is key if San Antonio is to see measureable improvements.  Mr. Weston believes that “the only real tangible result is to move the needle on the goals and create results on the vision.  The ultimate test of success of SA2020 is whether we create a focus of priorities on [these points] that creates better results in a decade.”

With a successful entrepreneur and businessman like Mr. Weston championing this project, San Antonio can take the vision of the SA2020 initiative and continue to evolve into a leader of American cities.

Graham makes his residence in New Braunfels, TX and suggests that you check out the Huisache Grill the next time you are up I-35.  He advises ordering the beef tender tails with the tortilla soup and either getting green beans or asparagus as a side.  He’ll drink ice tea, and lots of it.  “The Huisache Grill is world class,” he assures us. “It’s not expensive, and it’s absolutely great!”

When he offices out of the Rackspace location in Windcrest, Graham likes to drop by Mama Lee’s for some soul food.  He orders the baked chicken with double okra and yams and will wash it down with red Kool-Aid.