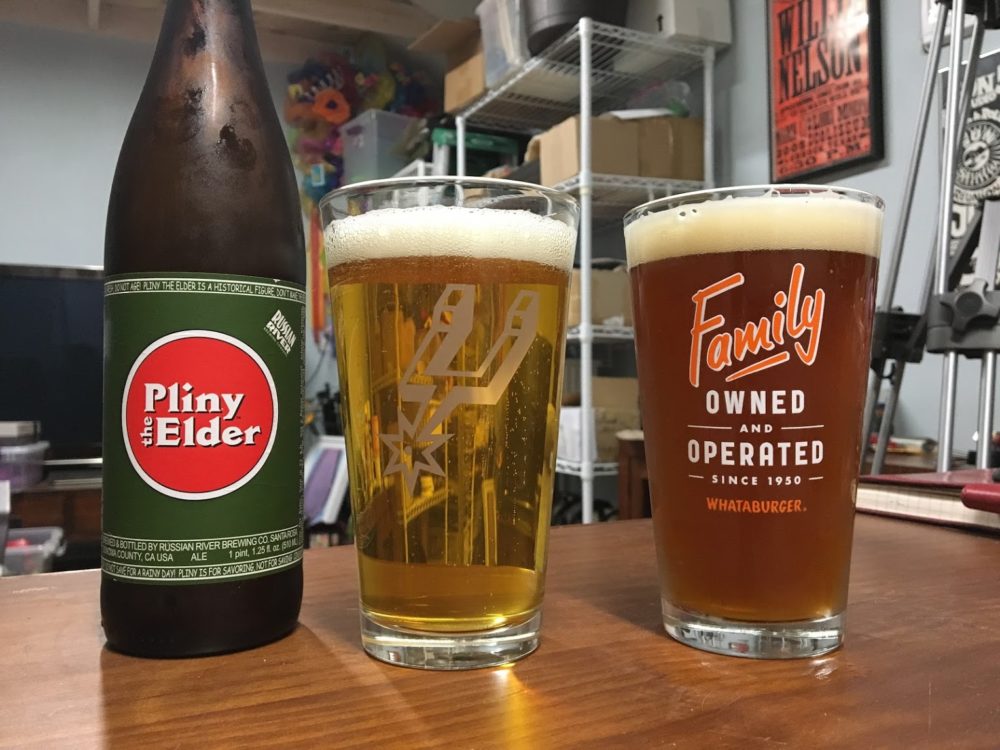 When I decided to start home brewing, I realized that I was going to focus into two types of beers: (1) clones of those that I can’t find in stores here and (2) styles that are extremely expensive to purchase. I imagine that this philosophy will change over time, but this is where I am focusing on initially. So, to get started I decided to do Northern Brewer’s Plinian Legacy, zero in on a clone of Pliny the Elder, one of the top-rated craft beers in the country.

I had never had Pliny the Elder, but have heard that it was just a massive beer, full of hops. As a fan of IPAs, I thought that this double IPA would be a good one to start with. And man, did this beer have the hops—ten ounces of assorted hops (Columbus, Simcoe, Centennial, Amarillo) along with two syringes of a gooey liquid called Hopshot.

For brew day, I had a couple of friends along, Alan and Frank, and we had a great time making the Plinian Legacy. During the process, the beer of choice was Ranger Creek’s Oktoberfest, a nice compliment to the brew day. But it was most cool hanging around with a couple of good friends and cutting up.

You can get the Plinian Legacy brewing instructions here, but let me just say that this beer gave me an appreciation for what goes into the IPAs that I love. The hop schedule was intense, adding ingredients at 90, 45, 20 and zero minutes of the boil. You really had to be on your toes making sure that everything was ready to go and wouldn’t boil over (yes, we had a massive boil over!).

It came time to finally cool down the wort and we moved it to the sink with the homemade wort chiller. There was a lot that went wrong in that moment, the most which was not having the tubing tight enough and water spraying into our wort. The design of my wort chiller was fundamentally flawed, but we were able to cool down the mixture from 196 degrees to 80 degrees in 26 minutes. From what I understand, the faster you can cool down the hot liquid the better, so we didn’t really do a solid job on that in this particular instance—but modifications to our wort chiller should hopefully remedy the situation in the future.

After that we took a hydrometer reading and got something incredibly low. If you’re new to brewing like myself, you used a hydrometer to take a specific gravity reading of your wort. That first measurement is called the Original Gravity (OG) and then you take a reading before bottling called the Final Gravity (FG). These measurements extrapolate how much of the sugars have been consumed by the yeast and turned into alcohol—handy online calculators can give you that rough percentage. We were super worried about the low OG measurement (we got a 1.045 and the Plinian Legacy instructions said we were supposed to get 1.070—we made a rookie mistake, trust me, we had to have hit 1.070), but just decided to stick with the process. I’ll write a post on the “5 Mistakes Made on My First Homebrew” in the near future explaining why we messed this up.

We couldn’t get the temperature much lower than 80 degrees and it was getting late, so we decided to add in the yeast at that temperature and hope for the best. A good friend who homebrews a bunch said that those final degrees are the hardest to hit. After shaking the bucket, it was stored out in the shed. My friend had warned me of pretty active fermentation in the first week, so instead of just putting an airlock on the bucket, I ran a tube from the bucket with the soon-to-be-beer to another bucket filled with water. This would let any blowoff run into the bucket instead of my floor. While I didn’t get a lot of blowoff with this brew, I have in subsequent ones and this process has saved me a huge mess! In a couple of days, the blow off tube was sending out a lot of CO2 (the byproduct of the yeast eating the sugars and turning them into alcohol). Here’s a video of what it looked like:

Opening that bucket to siphon it into a secondary fermenter was a smell of heaven. It smelled like an IPA so I felt that the boil over, wort chiller and specific gravity measurement fiascos must have been all right. I transferred it to the secondary fermenter and then proceeded to dry hop the brew two weeks before bottling and then another week before. Through the method, I actually got to learn what the phrase “dry hop” means—this has been one of the more rewarding parts of the brewing process, getting to learn first-hand what some of the words you hear actually mean.

A month later and the Plinian Legacy was bottled, which introduced both the kegging fiasco and the bottling fiasco. Rest assured that both will be covered in that “5 Lessons Learned in My First Homebrew” post that’s coming up. But what was remarkable is that after I got the keg working and properly carbonated, this beer was actually good. Like, I would actually purchase it from the store good.

It had a deep amber hue and a nice floral smell—being so close from the dry hopping to glass made a huge difference. I mean, the smell of hops just smack you square in the face when you go to take a sip. I quickly learned that the OG measurement was way off because after a glass of Plinian Legacy, you’re feeling good.

But don’t take my word for it, here is what SA Flavor beer reviewer (and co-homebrewer) Alan Bush had to say about it:

The Plinian Legacy is a delicious double IPA hop bomb. This beer is all about hops, from brewing through enjoying. I found the clone to differ from its namesake, Pliney the Elder, in a few key areas, but it’s still a good beer. I would definitely order this at a bar.

In appearance, it is a bit hazy, with a deep copper color, and a thick, foamy white head. The aroma is primarily of hops, with a hint of tropical fruits and citrus. Some tropical fruit flavors are at the forefront, with plenty of citrus on the backend. It’s a bitter beer, which complements the grapefruit flavors. There’s  a nice malty sweetness underneath all of it, which keeps the hops mostly contained. The slightly thicker feeling to the beer, along with the high ABV makes this more of sipper than a crusher.

This beer turned out well. Not “good for a homebrew,” but actually good. I’d drink this again, if it’s ever brewed again <cough>hint</cough>

In the process of brewing the beer, I was able to pick up a couple of bottles of the actual Pliny the Elder from the Russian River Brewing Company. Even though this was a clone, the color of the beer was completely different with the Plinian Legacy having a way more darker hue than the beer it was copying. While both were hop bombs, the profile of the hops was a little different than that of the Pliny the Elder. So while the Plinian Legacy may have not quite tasted like Pliny the Elder to be considered a “copycat” in my opinion, it was a solid beer that could stand on its own.

With this first brew, there were many things I learned. But ultimately, I really enjoyed getting to just hang out and make something. Yes, I know that ordering a kit online and using malt extract is kind of like the Blue Apron of brewing, but at the end of the day I had some beer that I had a hand in making. And it was pretty neat.