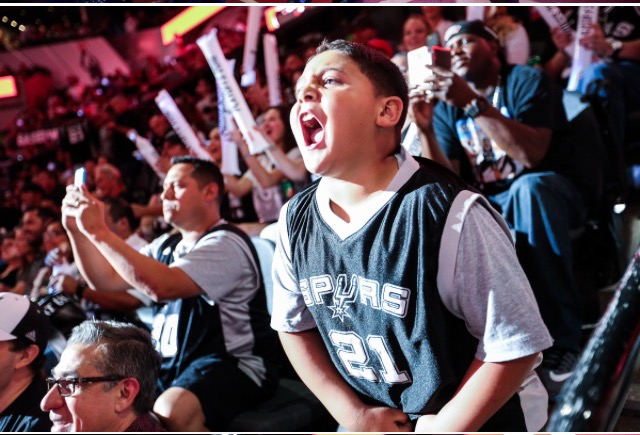 At long last, the summer of waiting is over. The crisp—ok, let’s be real this is South Texas, the slightly less unbearable fall air, signals the return of our Spurs Family. And that doesn’t simply mean Tony, Manu, Kawhi and Pop, but people like Spurs Jesus, the Dancing Usher and our beloved Coyote. These characters are a huge part of what makes the AT&T Center one of the most difficult places for opponents to play in and such an electrifying experience for fans to watch Los Spurs. But this year, look for a new face to rise up as a favorite Spurs celeb. A living, breathing, hip-shaking manifestation of Spurs spirit that only a pure hearted fan could produce: The Spurs Dancing Kid.

Ten-year-old Braeden Sada made a name for himself as “The Spurs’ Dancing Kid” during the second half of the 2016 season. You may remember seeing him blow away the competition in the Spurs’ jumbotron dance battles, an absolute magnet for the in-game video team.

“The camera always seems to find him, no matter where we are,” Joseph Sada, dad and game day partner in crime, said. Season ticket holders for both the Silver Stars and Spurs, the Sada family are regulars at the AT&T Center. But this past year Braeden became more than just a spectator—The Spurs Dancing Kid became a phenom.

When I spoke with Braeden about how he got started dancing he said the music inspires him to move. “When the right song comes on, it just pumps me up,” Braeden said. Just like the Spurs, when the bright lights come on he knows it’s time to shine. He loves showing off his moves and rarely gets nervous about being in front of such a big crowd. “Sometimes I get nervous, but once I actually start dancing it just goes away,” Braeden said. And he has every reason to be confident, the crowd loves him and goes crazy when he starts cutting a rug.

Grooving through this past season, Braeden’s new found celebrity has created special memories. While all of his battles have been fun, his epic bout with the Spurs’ Dancing Usher was his favorite.

“They called us and asked if I wanted to battle the Dancing Usher, and so I said yes!” Braeden said, his voice lighting up. While there’s still debate on who was the winner, Braeden felt confident he got the W, adding “The Dancing Usher told me that the other staff told him to go easy on me because I’m a kid.”

When Braeden isn’t entertaining crowds at the AT&T, he’s just a regular fourth grader. He plays football for the Junior Barons in the Texas Youth Football Association and is currently in the hunt for a second consecutive championship season. With the Baron’s football season winding down, he’s ready for the Spurs championship hunt too. When asked if there were any new moves he’d been working on for this season Braeden simply replied, “It’s a surprise”.

With the home opener on October 29th, we don’t have long to see what Braeden has in store. And if you can’t make it to a game, be sure to keep up with The Dancing Spurs’ Kid’s new moves and say hello on Instagram at @spurs_dancing_kid.