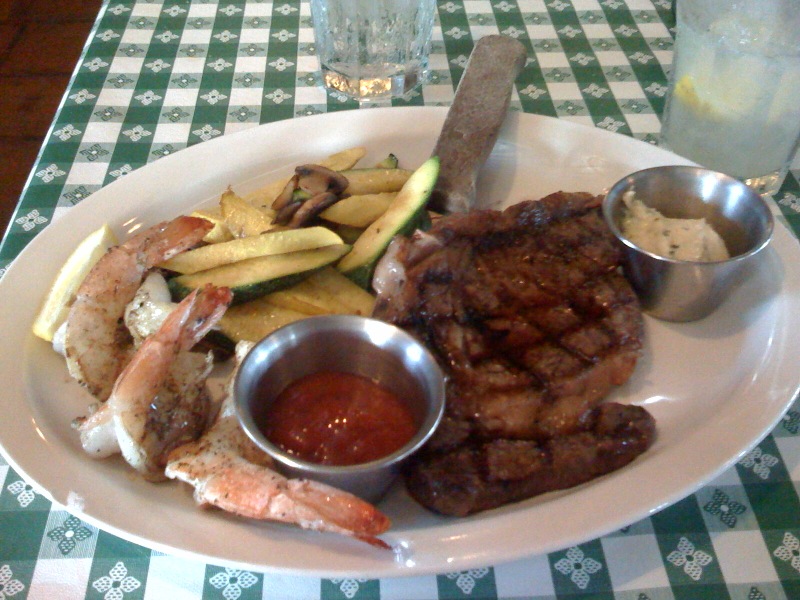 Today I was on the North Central side waiting to meet up a friend in the evening, so I decided to go to the FAR North Central Side (way up 281 until you just barely cross the Comal County Line) to go get some BBQ from Casey’s, a place that I used to enjoy eating at when I worked on 1604 and Bulverde. I decided to take the backroads to see what developments had taken place, so I went from Bulverde all the way to 281. I was amazed as there was a sea of houses where once the vast and mighty hill country had rolled through with live oaks. I was reflecting on how cities change when I pulled up to the former Casey’s BBQ which had now become My Place Bar and Grill. Deciding to check the past at the door, I went in to see what new food would be inside.

First off, the place is completely different on the inside from the old Casey’s; I will say that they did do a pretty good job with the interior, although the bar that separates the patrons from the kitchen seemed a little tacky. I was greeted by a hostess who promptly seated me; there was the ’50s music channel being played on satellite radio. The gorgeous patio that looks out at the hill country (if you want to check it out, you had better hurry before the developers catch up…) and I believe that they still have live music. I would have sat outside, but our string of 100 degree days has just beat me down.

I decided to order the special for the evening which was the steak and jumbo shrimp with mixed vegetables; you could get the shrimp either fried or grilled, and I opted for the grilled version. For a drink I got the homemade lemonade (I am a sucker for lemonade and limonada) and that turned out to be a good choice — it was on the tart side (which I like) and you could get as many refills as you wanted.

The meal took a little while to prepare, but that was ok by me because I was just on a casual evening out.  Once I got it, I started with the vegetables which were fresh squash, zucchini, and mushrooms; they were all fresh and nothing like that vegetable medley from the bag.  There was a nice taste to them, but throw healthy out the window as they were just dowsed with butter.  If you are having problems with your kid eating their vegetables, take them here.

The jumbo shrimp were nicely prepared too; they had a great flavor to them (I didn’t even bother with the cocktail sauce), but again, I was kind of overtaken by the intense buttery flavor.

The steak was the biggest disappointment.  It was a decent sized steak, but it was a terrible cut of meat.  There was almost more gristle on that steak than there was steak; all kidding aside, I would bet that a good 1/3 – 2/5 of the steak was fat.  You could tell it was a terrible cut of meat because I probably only had three pieces where I did not get a substantial amount of gristle accompanying it.  The taste was all right, but it was again a really buttery flavor.  To top it off there was a big hunk of butter on the side.  Are you seeing a theme.

The most positive thing I can say is that the staff was incredibly friendly.  My waitress was very nice and engaged in some pleasant conversation for the majority of the meal.  She was really pretty good.

You know, things are always going to be changing; you just hope that it is for the better.  I really can’t say that the food was bad, but when I go out to eat, I want to really feel spectacular about visiting the establishment.  I think the restaurant was all right, but I would trade it to have Casey’s back any day of the week.

Value: 6/10 (my bill was $18, but then again I did get steak and shrimp and homemade lemonade for dinner; that would have been a good value had the food been spectacular, but alas, it was only average)
Atmosphere: 8/10 (like the atmosphere; the patio really makes it)
Service: 8/10 (really solid service, however, I was disappointed no one told me goodbye when I left)
Taste: 5.5/10 (The food was slightly above average thanks to the lemonade and vegetables; the steak was incredibly fatty)
View Larger Map