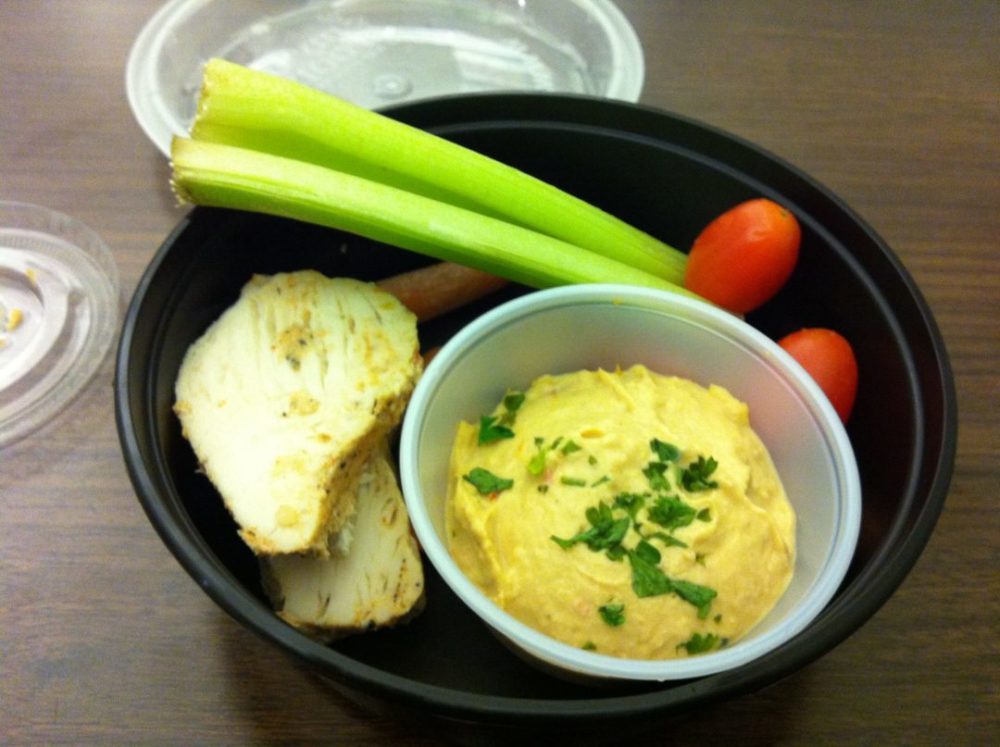 I have completed my first week of the My Fit Foods 21 Day Challenge and it has been quite interesting.  There is not a week in recent memory where I have ate more vegetables and drank less caffeine or alcohol.  To top it off, I only went out to eat once (each week you get a cheat meal) which is definitely difficult for a person who keeps up with a food blog.

At the conclusion of the week, I will walk through some of the difficult and positive moments prior to discussing some of the food that I ate.

Last Sunday, my girlfriend and I left my parents’ house.  We took our My Fit Foods meals in a cooler and ended up stopping at a gas station in Bronte, TX to heat up Lemon Turkey entrée for lunch.  This was probably one of the harder moments for me because I was surrounded by all these foods that I was not allowed to eat.  It was like they were sitting there mocking me as I struggled to choke down some spicy turkey and rice with a twist of lemon.  Not fun at all.

That night we got back to San Antonio and throughout the drive I was reminded how much food advertising there is in our society.  Billboards, gas stations, radio, TV, and internet, it is constantly around us.  The advertising was so blatant; I think I was shocked because I was acutely aware of what I was not allowed to eat.

In the past, I have given up sodas, sweets, or alcohol for the Lenten season prior to Easter.  I thought that this would prepare me, but what I forgot is that giving up one item still allowed me to find shelters in other items.  Can’t eat a cupcake, ok, I’ll bury myself in pizza. No beer? OK, I eat a tray full of cookies.  You can’t do that with the 21 Day Challenge.

The second day was the hardest.  The My Fit Foods cocktail made of cranberry juice, lemon, apple cider vinegar and B12 was incredibly bitter and set my day off bad (I have gotten used to the taste and now actually enjoy it; funny how taste buds work).  I woke up and ate the My Fit Foods Breakfast Tacos but I was pining for Leticia’s breakfast tacos served in the lobby at work.  My coworkers were slinging back coffee and I was drinking green tea.  I was in a bad mood.

While I don’t normally drink a lot of liquids, I was supposed to consume 80+ ounces of water a day.  I started drinking water early in the morning and felt like I was going to explode every 30 minutes.  It was like the water passed right through me as soon as it hit my stomach.  I was very uncomfortable.

I felt withdraws from eating out.  My skin was crawling just thinking about the next three weeks.  But it was strange, I never once felt hungry while being on the My Fit Foods program.  It was then that I realized my desires were not born of hunger but rather an addiction to unhealthy foods.  This helped me get through the second day.

On Tuesday I found out that Wynne, the lady who did the consultation, was no longer with the company.  I had a couple of temporary nutritionists that I had to route all my questions through.  This was a minor blow because I felt I had a good rapport with Wynne and haven’t met either of these new people.  I also wasn’t getting a Large sized partition dinner, instead getting a Medium and Small; this was aggravating to me because I don’t know if the two smaller sizes add up exactly to the larger meal and have since froze the smaller dinners.

(Oddly enough, my new nutritionist Kasi called me up while I was putting the finishing touches on this blog article!  That makes me feel good that they are checking up on me!)

The most difficult thing for me is how social food and drinking is for a young professional.  At work, I hang out with my friends over lunch.  On Thursdays, I play volleyball and meet up with my team afterwards for a meal and drinks.  I went to the Austin City Limits festival this weekend and my girlfriend had to put a lot of thought into how we could eat only the My Fit Foods throughout the day of concerts.  We had to skip out on the late night meal with friends afterwards and couldn’t go to breakfast in the morning.

This is something you should be cognoscente of if you embark on this program.  I hate being that guy that says, “I can’t go out to eat because I am on a diet.”  While I believe that after the program there will be a time and place to go out and eat in moderation, during these 21 days I am going to be a stickler.  This would be a very difficult part of the program for anyone.

As the week progressed, eating the meals became easier.  The strength of the My Fit Foods 21 Day Challenge is that it is all planned out; you don’t have to think of anything.  This is also a bit of a frustration for me because I like to be spontaneous about where and what I eat.

I have also enjoyed not having to go to the grocery store to figure out what I am going to eat.  I am one of those impulse shopper who goes to the store with all sorts of good intentions (throw in the red bell peppers, zucchini, and spinach to the shopping cart!) but then get sucked in to buying things I shouldn’t eat on a regular basis (you know I deserve some ice cream and supreme pizza…).

Additionally, having the meals already prepped for me allows me to have more time back to myself.  I don’t have to decide, drive and wait nor do I have to shop, cook and clean.  This has given me time to devote further energies to having fun or my entrepreneurial activities.

Another bonus is that I have slept better.  I don’t know how to quantify it, but it is easier to fall asleep and wake up.  However if I do stay up late I feel it the next morning and drag a little bit.  I don’t know if this is a side effect of not consuming as many calories and pushing me later than I should.

I would be lying if I didn’t tell you that the cheat meal was salvation.  I cried as I ate a Freddy’s patty melt.  It was so good.  This too fits into my goals; I want to get back where eating out was a treat instead of an everyday occurrence.  I think this will be possible because as we all know absence makes the heart grow fonder.  I’ll be interested to see where I am at the conclusion of week two.

Stats
Exercise: Monday walk 0.8 miles in the morning, 1.5 miles in the evening, Tuesday run 1.5 miles; while not official, Friday was Austin City Limits and I walked all over!  I look to exercise more this week.
Caloric Intake: Not taking into consideration of the cheat day, averaged about 1,800 calories a day for a 6’ 1” guy.
Weight: 192.4 (lost 3 pounds from last weigh in of 195.4)

Foods I Loved
I absolutely loved Cynthia’s BBQ Chicken, in fact, I would eat that on a regular basis.  The sauce was pretty good and I really liked the potatoes.  The Turkey Pasta was nice and spicy with a good tomato sauce.

The Hummus Bowl snack is tasty with celery, carrots, tomatoes, and grilled chicken with Hummus to dip it in.  The cream of the crop is the Hawaiian Chicken which is tender chicken with mandarin oranges, pineapple, and pine nuts over a bed of parboiled rice. This is delicious and quite filling.

Foods That I Thought Were Good
While my girlfriend raves about the Breakfast Tacos, I think that they are just all right.  They have a little too much cumin for me I would gladly trade that spice for a bowl of freshly made pico de gallo.

The Ninja Tenderloin was great but the spinach was too peppery; I talked with the nutritionist and she said she would sub in roasted veggies instead.  The wrap was tasty but not too filling, although it had a great function of getting snuck into Austin City Limits.

Foods That I Did Not Like
I was not a fan of the Ginger Chicken Delight and it was namely because there was so much water at the bottom of the trey.  In fact, it got all over my bag when I tipped it to the side.  The meal was just messy and not worth the trouble.

I had to choke down the Gimme More Chicken Salad, but this lies more in my preferences than the meal itself.  My girlfriend thought it was every bit as good as typical chicken salad, so if you are a fan I’m sure you’ll like it.  Finally, I did not like the Fit Cottage Cheese snack, but again, it is primarily because I do not like cottage cheese.