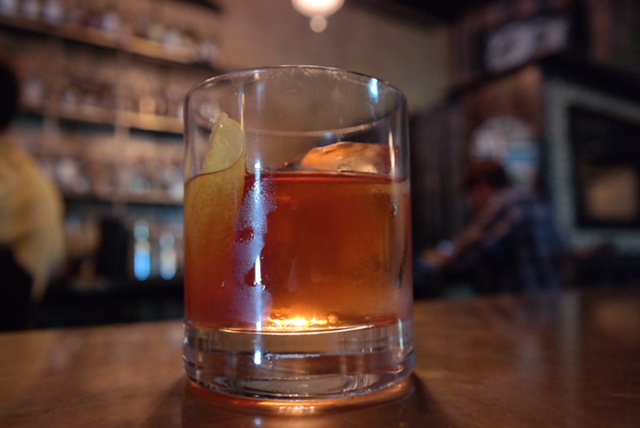 My City Crawl is not a new idea by any means, however it’s absolutely doing it right. Unlike a pub-crawl that concentrates on ad driven tourist traps that you’d never find a local set foot in, My City Crawl explores independently owned local bars that San Antonians frequent on a regular basis.

Their tour promises a couple of free cocktails, discounts on other drinks and a Neo-Historical tour. And best yet, parking was free at a designated location. This was the part of the tour that intrigued me the most—San Antonio is a city on the rise and it can be hard to keep up with her. So I was excited when I learned that our stroll through downtown would also incorporate some modern history of San Antonio.

The starting point of the crawl was Juniper Tar. I used to frequent this bar under the old management and have been meaning to return since its reopening. By starting with Juniper I immediately know that My City Crawl would be taking us to places that locals actually go.

Mario Ochoa and Valerie Perez, co-founders of My City Crawl, were our hosts for the night. They were incredibly enthusiastic about the San Antonio scene and very polite. We received two free drink tickets that could be used at the first and second bar. For my first drink at Juniper Tar, I ordered an Old Fashioned and my wife selected a drink called the Blue Moon. Both drinks were outstanding and well-made.

I got a chance to catch up with Mario at the first stop and asked him about his idea for My City Crawl. “I hope to leave people feeling more energized about the city they are in,” Mario told me.

I love the fact that they immediately claim no tourist traps as part of the tour, but was curious about what the team was trying to stay away from. “A big part of our economic engine is tourism, however there are so many other places to explore,” Mario explained. “So when I talk about tourist traps, I’m talking about the places like the River Walk. [While] it’s beautiful and a gem, there is more to San Antonio. I don’t think enough people get out on the streets of downtown and explore it.”

It was exciting to listen to Mario talk as I could hear his excitement and enthusiasm he has for our city.

As we walked down Houston Street we listened to Mario tell interesting tidbits of local businesses and new downtown developments. It was all very interesting and gave us a view into the future of San Antonio. In total we visited four bars: Juniper Tar, The Last Word, Nectar Wine Bar and Haunt. We stayed at each bar for about an hour or so, just enough time to learn a little about the place and enjoy a drink.

The amazing thing about this crawl was getting to walk the streets and see all the art that local artists have been producing lately, such as the Kinetic Skyline by artist Bill FitzGibbons or Angel Wings by Kelsey Montague.

My city Crawl definitely accomplishes everything it sets out to do: you’re given a night that is full of amazing cocktails, some of San Antonio’s most beautiful scenery and the experience of a local. And they recently announced that they will start crawls through SouthTown, the ever popular art and foodie mecca just South of downtown! So get out and explore your city—she has everything you could want and more.

Thanks to My City Crawl for letting SA Flavor participate in the media preview event.