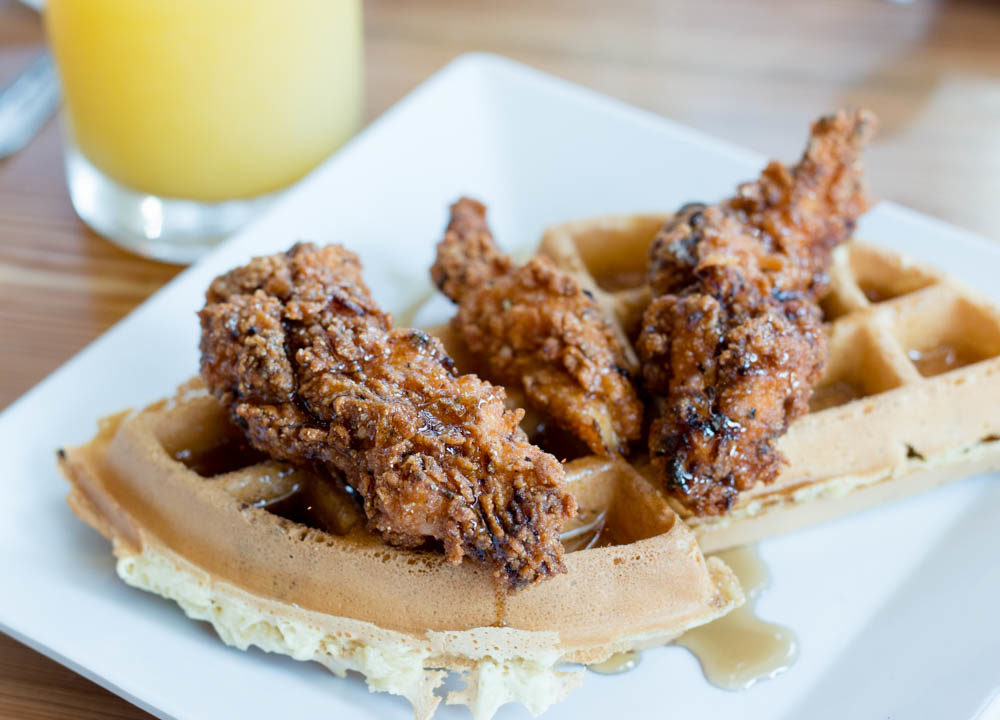 Merriam-Webster defines brunch as “a meal that combines breakfast and lunch and that is usually eaten in late morning,” but my wife isn’t having it. According to Mandy, brunch isn’t brunch unless there’s a buffet. And our good friend Amy insists that brunch must always have alcohol of some sort.

So it was with great fortune that I was accompanied by Mandy and Amy for a recent Sunday brunch at Tacos and Tequila on Broadway in midtown. Tacos and Tequila offers an all-you-can-eat brunch featuring both Mexican and Americana staples along with two mimosas for $20!

Occupying one of the floor levels of the Mosaic apartment building on Broadway, Tacos and Tequila is a chic restaurant befit of the new scene happening in midtown. The bar is sizeable, and I was impressed by their variety and quality of Tequilas they offered—a future visit must be in store to sample some firsthand. The music was contemporary and by the time we left a DJ was curating the selection.

We arrived right at 10:00 a.m. when the restaurant opened and ten minutes later there was a sizeable crowd. This was one of the restaurants I wanted to make sure to visit this summer and I was apprehensive of bringing a baby out to the restaurant—it’s amazing how an infant can curtail dine-in visits into to-go containers. It turns out that this fear was unfounded. While the brunch was upscale the atmosphere was more relaxed (I counted a couple of babies) and wouldn’t hesitate bringing Natalie there in the future.

There were many choices, but the first one that caught my eye was the make-your-own-taco stand. And the meat that I couldn’t resist was the brisket. The skillet had thick cuts of meat and after grabbing one of the largest ones, I added a spicy red salsa on the side. Upon request, a waiter brought along some fresh slices of avocado, lime and cilantro to the table.

A return trip found me filling my plate with some chicken and waffles. The waffles were solid but that chicken was amazing. Tender and crispy, the seasoning of the chicken went well with the syrup.

On another trip I filled a plate with a Southwestern pasta, beans, rice, potatoes, migas, a black bean adobe pie (black beans inside a corn exterior) and a biscuit. Of those items, the migas were a little disappointing but admittedly it’s hard to keep the fried tortilla strips crispy on a buffet item. The biscuit was awesome, I just wish I had some honey.

And this was all that I was able to eat—I didn’t even get to try the enchiladas, made to order omelets or eggs benedict. I ended with some of their churros and mini desserts, which was a sweet way to end. The mimosas were all right (the first one I got was watered down but the second one was decent), but hey, you get two of them included with your meal so there’s not much to complain about.

The only thing that was a little strange to me was the coffee. It had a cinnamon flavor to it that was pleasant at the beginning, but later became overpowering. I don’t know if they had a non-flavored coffee (I didn’t ask), but it may be worth asking for from the onset if that is your preference.

Overall, the brunch at Tacos and Tequila is an outstanding value. This high quality buffet has a variety of choices that appeal to diners whether they are looking for tacos or waffles served in a very bright and relaxing atmosphere. And as far as what the definition of brunch should be, I’m sticking with Mandy and Amy’s explanation.