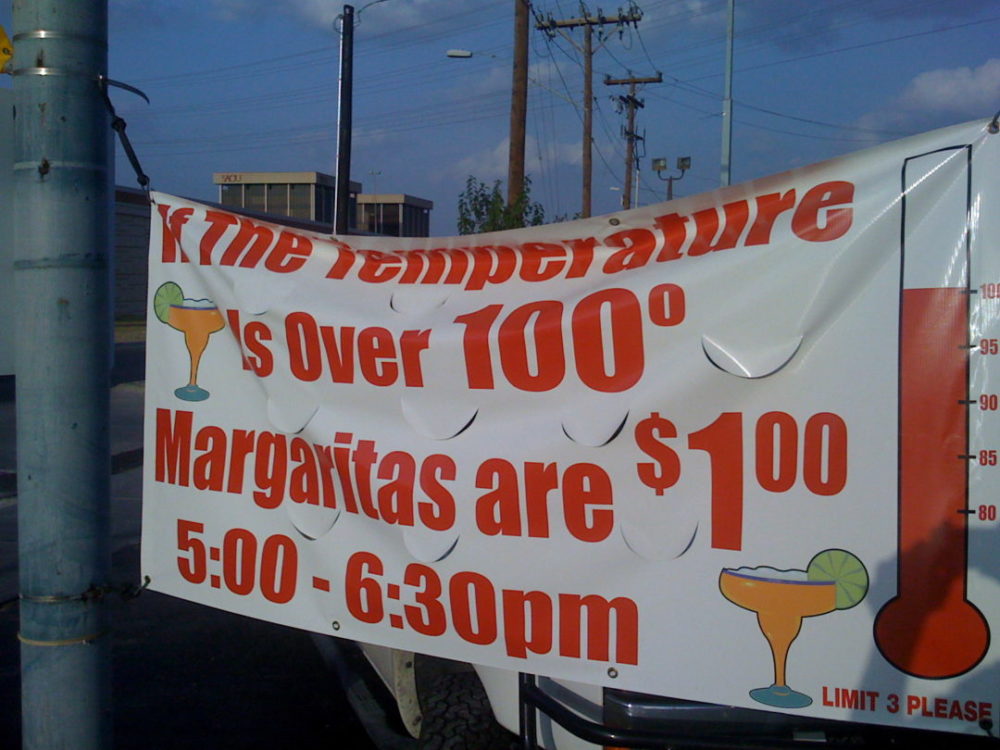 After playing volleyball, you can work up a pretty good appetite; this is why my team and I always go snag some food after the big game.  I suggested Martha’s after last game because of the fact that I saw an advertisement for $1.00 margaritas during happy hour if the temperature was over 100 degrees!  Now, I realize that it was well after happy hour, but hey, a catchy advertisement still gets me thinking about the place!

Apparently, this Wednesday night was a biker night at Martha’s – there were tons of motorcycles, leather, a dj spinning some tunes, and a chip/salsa/queso bar set up outside!  One of the guys on my team brought some chips and salsa to the table and they were inhaled.  The salsa was incredible fresh made primarily of tomato and some peppers.  I went back to refill and noticed that there was also some free queso!  I gave my friend some grief, because it is common sense to NEVER turn down free queso!!!!  Not only that, but the queso was really really good; had just the right amount of spice in it.

Now Martha’s is a clever restaurant.  You see, they have some really good combination specials, and the #1 automatically comes with guacamole on the side; the other combinations are appealing, but they do not come with guacamole.  Having seen the guacamole listed first you are like, “Man, I want some guacamole,” but you would have to pay an extra buck to get it added thus blowing the cost of the combo out the water!  I didn’t want the #1, but I did want guacamole so I looked all over the menu for a platter that had it on the side.  I ended up going with the Taco Salad.

Have you ever heard the Budweiser “Real Men of Genius” commercial about the Taco Salad Guy?  Well there have never been truer words spoken with regards to Martha’s taco salad – they pile all sorts of goodness in it including cheese, sour cream, guacamole, rice, chicken tomato and lettuce; I even took mine over to the spot on the patio and loaded it up with queso (this is an excellent touch and I would advise you to do the same).  The shell was really flakey and held its crispiness throughout the entire meal.  I was stuffed after eating only half of it!

In spite of the patio being packed, our waitress was extremely proficient; she was pretty good at getting all our drinks out to us in a timely fashion and also interacted with the table both in dishing out and receiving a bunch of cracks/jokes/grief.  We accidentally let her know we wanted a split ticket at the very end, and again in spite of the large amount of people there, she was able to accommodate us without issue.

So while the heat has been brutal here in San Antonio, there is a place where you can relish in it, be nice and full, and even have a shot at a dollar margarita!

Value: 8.5/10 (there are some good patio specials, especially during happy hour but some of the entrees are a little high when they aren’t on special)
Atmosphere: 9.5/10 (loved the patio, especially during a biker night!)
Service: 10/10 (waitress was incredibly prompt and nice ESPECIALLY considering how packed the patio was)
Salsa: 7/10 (I liked the fresh salsa, but it was not one of my favorites in town)
Taste: 8.5/10 (overall pretty good flavor and will make you full!)
View Larger Map