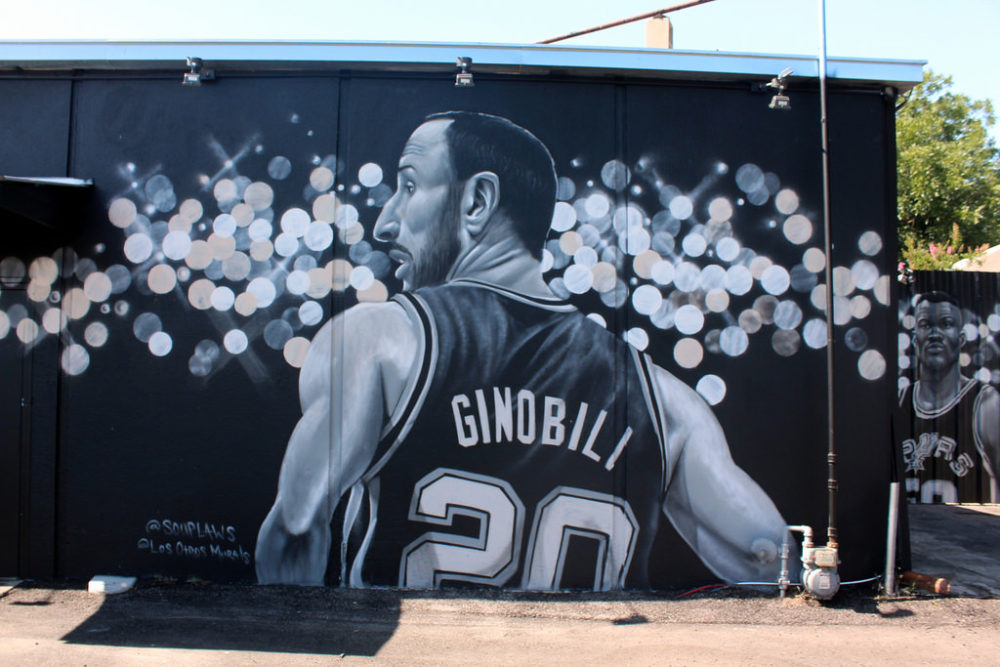 I was dreading this. We were all dreading this. But if we’re honest with ourselves, we knew it was coming. As soon as I heard Tony was being traded I knew it was over. Manu Ginobili has retired after 16 seasons with the San Antonio Spurs. And I’m a mess.

I know we’re not supposed to have favorites, but y’all, Manu was my favorite. He was the fire, the spirit, the heart of the Spurs for most of my life as a Spurs fan. It hurts to see him go, it hurts real bad. More than the hurt though, I feel a huge sense of gratitude for the years of hustle and heart he gave to San Antonio. To say a proper “Gracias” to Manu I called upon my family and friends to share their favorite Manu Ginobili Moments. Get your tissues, here they are.

If it’s not the most iconic Manu moment I don’t know what is. He was fearless on the court, whether he was staring down a rouge bat flying through the air or a 7-footer guarding the rim. Nothing could stop Ginobili. He had the heart of a lion and smacking down the bat was just another example of how Manu would never back down on that hardwood.

The Block Heard Round the World

Picture it: Game 5 of the 2017 Western Conference Semifinals. Series is tied 2-2. Spurs are up 3 against the Houston Rockets. Jump ball in Rockets court with 10 seconds left. Houston wins the jump, the ball finds its way to James Harden around the 3-point line, the clock is winding down, Harden gets past Ginobili, puts a shot up…AND IT’S BLOCKED FROM BEHIND! GINOBILI BLOCKED THE SHOT! SPURS WIN! Iconic. When I reached out and asked my friends and family for their favorite moments, this one came up the most for sure (and was memorialized in SA Flavor’s El Valiente 2018 Fiesta Medal).

2014 NBA Finals against the Miami Heat. Spurs are up 3-1 in the series and could take it all in this Game5. Good guys are up in the 2nd quarter and rolling. Off the outlet pass from Timmy, Manu drives to the basket, past Ray Allen, gets to the rim and absolutely posterizes 6’11” Chris Bosh. The crowd goes NUTS! The Spurs would go on to win the game, giving the city a 5th NBA Title! That dunk was a huge momentum booster, which is something Manu was always known for.

Steal against Rockets, Dunk on Yao

Throwing it back to another monster dunk, revisit this 2007 game against the Houston Rockets. Manu grabs the loose ball and fearlessly drives right at the towering Yao Ming, getting up and over to dunk over the huge center! No matter his age, no matter who was at the rim Manu would go for it. He was all heart on that court.

I mean, if there was a George Clooney of HEB commercials Manu was it. Again, he was always my favorite so maybe I’m biased but losing him in HEB commercials is almost as bad as losing him on the court. Although, we’re pretty excited to see him welcomed into the Retirement Club and get his monogrammed steak and unlimited supply of Creamy Creations with George Gervin, David Robinson, Sean Elliot, Bruce Bowen and of course Timmy.

After the 2014 Championship the cameras follow the Big 3 greeting their family and friends to celebrate. The camera pans to Manu, who is searching for his family, right as his wife finds him and Manu gives her the biggest hug and kiss. He is a family man with a heart too big to put in words. That love bled into the game every night he suited up.

As fierce as Manu was on the court, he was a goofball deep down. When a friend pointed out this clip of Manu pranking Timmy on the bench as his favorite moment of a 16-year career, I knew it had to make this list. Manu was such a great teammate and no matter how much success the team may have had, always stayed grounded.

And So Many More…

There are so many more favorites out there: long haired Manu winning a Gold Medal and then in ‘05 winning an NBA Championship, Manu getting after it for loose balls, so many buzzer-beaters, the great steals, every Eurostep, the circus moves at the rim. Manu did it all.

By the numbers he is one of the greatest who ever did it. 4 Championships, 2 time All NBA, 6th Man of the Year, Olympic Gold Medalist. Manu really was a fantastic player, but even without all the stats and accolades San Antonio knows that his greatest asset was always his heart. Manu played with a fire like no other. For 16 years of heart and hustle in a Spurs uniform, I thank you Manu.