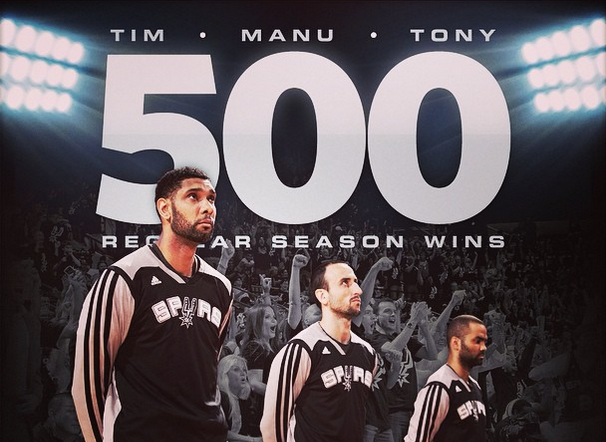 While Kawhi Leonard has added a fourth prong to the San Antonio Spurs’ star presence, there’s still all kinds of emotional attachment to the old Spurs Big 3 in this town—the Tim Duncan-Tony Parker-Manu Ginobili triumvirate that’s won more playoffs games than any trio in history.

They are the faces of San Antonio’s five championships, and every Spurs fan quietly dreads the day when one or more of those faces decides to call it quits.

The oldest of San Antonio’s Big 3 at 39, Duncan just finished his 18th season. He admitted to reporters at media day in September 2014 that he gave retirement serious thought prior to exercising his player option in June. That option ensured he remained a Spur during the 2014-15 season, but it leaves his future an open question.

A question no one really wants to ask in these parts.

In the wake of San Antonio’s loss to the Los Angeles Clippers, Duncan hasn’t said much on the subject. But head coach Gregg Popovich did entertain the proposition in an interview with USA Today in February. “No matter how (the season) ends, I think Timmy is going to look at (retirement) again,” he said at the time. “And if you ask me, my guess is that he’ll go for another one because he has been so consistent this season. “It’s just consistent stuff: another double-double, over and over and over again. Because of that, I think in his mind that if it continues through the rest of the year, I think he’ll say, ‘I’m going to go another year and see what happens.’” There’s no telling how much of Popovich’s sentiment is wishful thinking. The 66-year-old agreed to a multiyear contract with the organization in the summer of 2014. But Popovich did assure USA Today that Duncan had intimated that, “the minute he feels like he’s a hindrance to his team or he’s not on the positive end of helping them, he’s going to walk right off the court. “It might be during the third quarter of a game.”

After the opening round loss against L.A., Popovich suggested that the team might change on account of free agency, but that retirements hadn’t yet been discussed. Ginobili was a little more vocal about the decision-making process.

“So we can say I’m in a moment of uncertainty,” he told reporters after the series. “There are times when I review the season and say to myself, ‘How am I not going to play a little more?’ There are other times I don’t even want to see a basketball. I’m going to wait for this month and see how I feel.”

Like Popovich, Ginobili acknowledged that the 2015-16 roster may look a little different. He just wasn’t prepared to say whether he’d be part of that difference.

“I understand it is time to change things on the team for the makeup of the group,” Ginobili added. “But if Pop continues and Tim can continue, everything is different. I suppose we will have to talk a little bit with Tim, who appears to be on the same ledge as I am. We’ll see what happens.”

Duncan certainly doesn’t have much reason to leave—unless you factor in time spent with his kids and all that good stuff. The 15-time All-Star averaged nearly 14 points, over nine rebounds and exactly two blocks per contest during the 2014-15 season. Against the Clippers, he became the oldest player to ever record four games in a series with at least 20 points and 10 rebounds.

He’s still got it.

That’s the kind of consistency Popovich was raving about in February, and it would be awfully hard to replace in the near-term—even with a star big man like Marc Gasol or LaMarcus Aldridge potentially available as a free agent in the summer of 2015.

Finding a seven-footer to replace Duncan’s production is a tall enough order. Finding someone to replace his larger-than-life presence on both ends of the floor will prove even more challenging. On and off the court, Duncan is a rare and iconic contributor.

If he stays, it won’t be about legacy building. It’ll be about doing what he loves.

“He’s not going to hang on to finish a contract or make the money or have the notoriety that you know he doesn’t give a (expletive) about,” Popovich added in February. “So the way he’s playing now, he’s going to look in the mirror and say, “Hey, I’m doing all right.’”

At 32, Parker could have another several years left in solid form, perhaps more as a complementary player. But if Duncan isn’t the first to retire, it will be the 37-year-old Ginobili.

When accounting for the numerous protracted playoff runs and international play during the summer, Ginobili has logged a lot of miles in basketball terms. By his own reckoning, he only has one more year left in the best-case scenario.

“Every retired player tells me, ‘Enjoy it, play one more year,’” Ginobili told La Nacion earlier this season, as translated by HoopsHype. “And well, I’ve been doing this for 19 years and if it’s not at the end of the season it will be the following year. Then it’s over and it won’t come back.”

That hardly qualifies as a guarantee of another year, so Ginobili’s days as San Antonio’s famed sixth man may be numbered. Even more numbered than the elder Duncan’s.

At this stage of the conversation, two out of three isn’t all that bad. The Spurs could probably remain contenders without Ginobili, though they’d likely struggle without him and Duncan both. The latter is simply too important to San Antonio’s interior defense, an anchor and shot-swatter extraordinaire.

There will be free agents and R.C. Buford’s nifty draft finds. But there won’t be any replacing a ‘Big 3’ that’s defined a basketball generation.

Here’s to one more season with Tim, Tony and Manu.