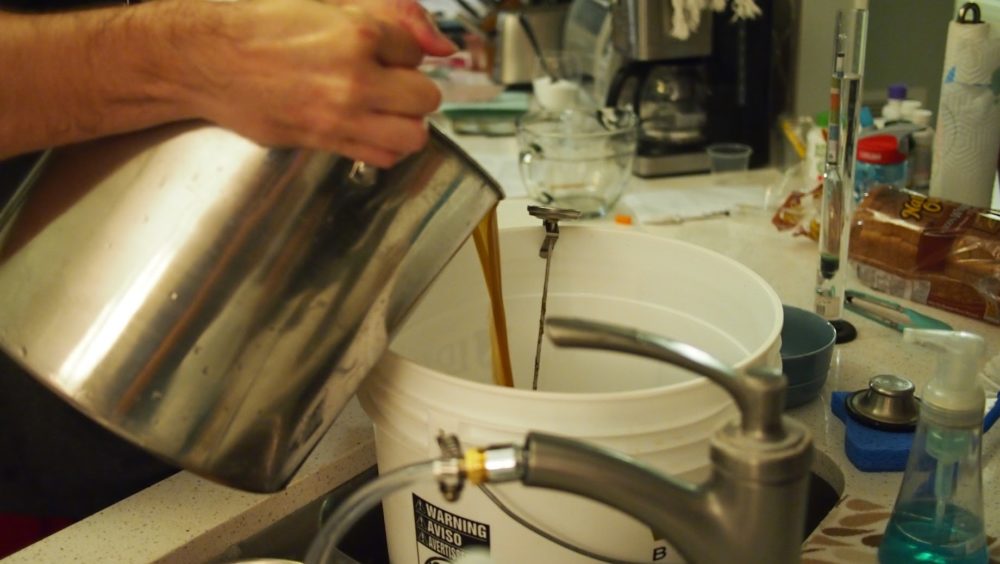 “For a quart of Ale is a dish for a king.” –Shakespeare

I didn’t always like beer, but then I did. Back in the day, craft beer was getting a Blue Moon, Shiner Bock or anything from Mexico (still love Carta Blanca). Then getting more into the New Belgium and Real Ale before ultimately moving towards the Lagunitas, Boulevard and Sierra Nevada. Around that time, 2011-ish, craft beer exploded and with it the desire to get more knowledge about the styles, processes and people behind my favorite pints. This ultimately led to me beginning to homebrew this fall, and I’ve enjoyed every minute of it. This is a quick synopsis of how I learned to homebrew!

The Itch to Homebrew

In the middle of August, my daughter and I took a trip to Chicago to meet my friend BC. I first met BC when in the biophysics lab that I worked over the summer as a freshman at Texas Tech. He was the graduate student pursuing a PhD, I was the over eager undergrad who thought he was going to become a scientist. BC did get his PhD and is now a Physics professor and researcher at Loyola. I found that a summer in a dark room with light-sensitive samples and a red light was not for me. But I bet I’m one of the few digital marketers who’s been published in Biophysical Journal. But I digress.

We're not making beer, we're doing science! Fun catching up with @beeellsee, but instead of doing experiments in the biophysics lab, we're doing it in the kitchen! Cooling down the bourbon barrel porter with his homemade immersion cooler that cooled the beer down in just 8 minutes!!! #homebrew #homebrewing

The point is that at one point in time math and science were important to me as a physics researcher and an industrial engineering graduate. But moving to marketing, I don’t exercise that scientific side of the brain as much. So when I went to Chicago and BC said, “Hey, you wanna brew some beer?” I jumped at the chance. And while it was a lot of work, the process made me feel like I was back in the lab. I was hooked. I knew I just needed to find a way to get started when I went home.

When it came to acquiring the equipment, I started browsing the selections at Northern Brewer. This was the company that my friend uses to his homebrew kits, and they also have a pretty good selection of equipment. I was eyeing their five-gallon starter kits, but then decided to take to Craiglist and Offer Up App to see what other folks were getting rid of.

I came across a killer deal on Craiglist, that included two different buckets, a glass carboy, kegerator, CO2 tank and regulator, siphons, cleaning brushes, flip bottles, air locks and a hydrometer for just a few dollars more than I would’ve bought a simple five gallon starter set new. If you’re getting serious about getting started on home brewing, I would highly recommend checking out what people are getting rid of before purchasing brand new.

I rounded out my equipment by purchasing a thermometer, tubing, bottling bucket, bottling wand, bottle capper, bottle caps, StarSan and bottle drying racks. I made a submersion wort chiller out of copper myself and saved some money on that end. Finally, I have to give a shout out to the good folks at Southerleigh who gave me several cases of new longneck bottles that they didn’t need. With my equipment in tow, I was ready to brew my first batch.

I was already to brew and was getting excited. I decided to order the Plinian Legacy from Northern Brewing, but one thing that I became acutely aware of is how much Amazon has spoiled us for Prime two-day shipping! The most inexpensive shipping seemed to take forever, and I was just chopping at the bit to brew. Furthermore, with the Texas heat (even in September), I opted to get the dry yeast to withstand to the higher temperatures during such a long voyage to San Antonio.

I’ll be writing another post about actually brewing the Plinian Legacy in a week or so, but I wanted to just talk about the brew day in general. Getting to hang out with friends and create something is just awesome. Sure, we had a lot of setbacks, I mean “learning opportunities,” but it was cool to just catch up with some good people and drink beer in the process of making beer.

But more importantly for me, it was a way to connect back to that Scientific part of the brain that hadn’t been used in a while. I loved not knowing if everything would work. It drove me mad that I had to wait six weeks to get a whiff of whether or not what I did was right, but it was incredible to wait. To not be able to get the answer with a five-second Google search. To not have the beer on-demand. To introduce a little uncertainty in my life that had seemed to have become somewhat predictable.

This is the gist of how I learned to homebrew and I can’t recommend it enough. It’s such a fun way to get to learn a little bit more about the beverage you love, hang out with good friends and, in the end, have something awesome to share with family and friends.