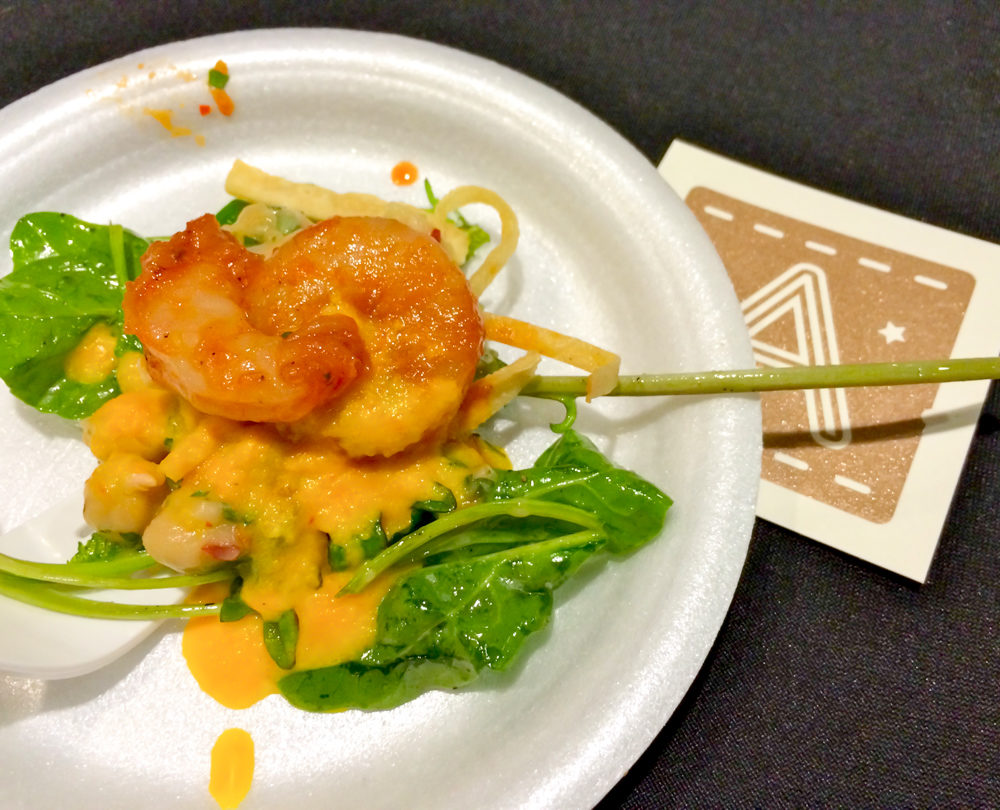 If I were to choose one word to describe Culinaria’s Grand Tasting event last Saturday, it’d be swanky. First of all, it was held at The Grotto in the Henry B. Gonzalez Convention Center. If you’ve never been (I hadn’t) it’s basically a private, covered outdoor area underneath the convention center. The San Antonio River runs straight through with walkways connecting different sections and foliage abound. That night, the entire area was lit up with colorful lights with a DJ in the corner spinning mellow party music. I walked into the crowd of people dressed to impress and was surrounded by fancy foods and what seemed like an endless supply of wine, beer and liquor. Swanky.

A long line of people typically indicates that there’s good food in store, and so was the case for Restaurant Gwendolyn. The all-local, organic restaurant served a plate of blood sausage over polenta with mustard seeds and bok choy. Now I’m no blood sausage buff, but that was fantastic.

Paloma Blanca made another appearance (see the Best of Mexico recap) with a new, amazing dish. Though not quite as adventurous as its trendier counterparts, the Pollo Chipotle with white rice was a crowd favorite.

One of my favorite Italian ristorantes, Paesanos, presented a tuna Carpaccio appetizer. In all honesty it was a little bland for my taste. I’ve noticed that they steer clear of pasta at these events, which is unfortunate since that’s what I believe they do best. I’d really like to see them serve one of their famous Italian specialties that never disappoint.

Kirby’s Steak House served a very impressive steak salad and passion fruit mousse. I’ve never understood the concept of topping a salad with steak (chicken is my go-to salad topper) until I tasted Kirby’s plate: now it’s crystal clear. I couldn’t spot the salad on their online menu but perhaps they would toss one together upon request. I sure hope so. The mousse was tasty as well but their salad definitely stole the show.

If you’ve ever eaten at Nao, you know about their ever-changing menu. The restaurant alternates which type of cuisine they will serve each month. So at an event like this, you never know what you’re going to get. For the Grand Tasting they offered a delicious slow-braised Caja China with yucca, plantain mofongo and garlic mojo.

Las Ramblas served a golden tomato gazpacho with toasted garlic, basil and lemon—a light and refreshing change from the other offerings.

At this point I deemed pork the meat of choice for the evening. It was everywhere, but I wasn’t complaining. Lüke offered a braised pork shoulder with bruschetta and fried kale. I’ve tried kale in most of its various forms and this just might be my favorite to date.

Arcade Midtown Kitchen served a spicy shrimp salad with chickpeas and spinach. While I welcomed the extra kick, it might’ve been too much heat for those with a sensitive palate.

I must admit I enjoyed the Asian-inspired display at Umai Mi’s setup more so than I enjoyed their “chips & dip.” They served shrimp chips with fresh Thai red curry crema, jalapeno, crispy shallot and herbs. The crema’s flavor was amazing, but the shrimp chip fell flat in my opinion.

As if that wasn’t sweet enough, I ended the night by stopping by Saucy Sweets to grab some alcohol-infused ice cream because, duh, alcohol infused ice cream. They had three flavors: pina colada with pineapple, coconut milk and aged rum; berries n’ bubbly with strawberries, limoncello and champagne; and mint julep with a spearmint-peppermint blend and Kentucky bourbon. Why didn’t I think of that?!

If that didn’t have your mouth watering I don’t know what will. The Grand Tasting was an awesome opportunity to sample foods from some of San Antonio’s top-tier restaurants in an equally outstanding venue. If you want to go all out next year, Culinaria–style, this is the place to do it.

Lindsey is a San Antonio native on a constant hunt for new and noteworthy restaurants, music and nightlife around town.