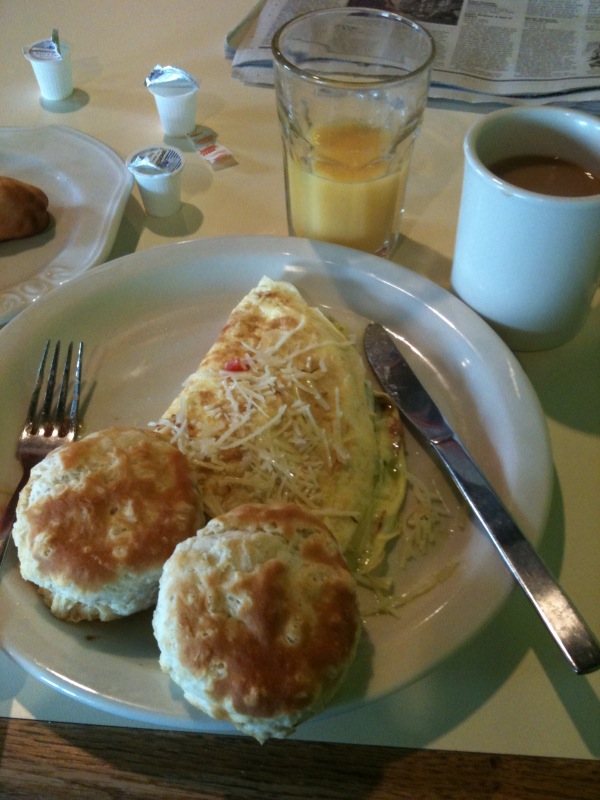 ***NOTE: It appears that this restaurant is no longer in operation***

My continuing search for breakfast food besides tacos led me around the corner to the Flour Power Café.  With a funky painted interior, the restaurant tries to strike a chord with a hippy feel full of peace and love.

I will say that I tried to eat breakfast here once before and was like 5 minutes after 11:00AM, which I was told is when they stop serving breakfast.  I understand that there has to be a point in time when you stop serving breakfast, but I think you should have a grace time of at least 15 minutes!  I ended up returning on this morning to check them out.  (Oddly enough, their website shows that they serve breakfast all day long on the weekend, but I would advise getting there early and not chance it!)

I was in the mood for a big breakfast and ordered coffee, orange juice, the European Omelet (which came with a couple of biscuits), and a couple of jalepeño sausage kolaches.

When my plate was brought out, you could immediately smell the deliciousness of the European Omelet.  It is made with three eggs, pesto, garlic, tomato, basil, Parmesan and Brie cheese.  The two cheeses and the spices work incredibly well to get an amazing taste to the omelet.  Particularly pleasing was the way that the omelet smelled as you ate it; looking at other tables, this dish looked as though it was one of the tops.

The homemade biscuits were really nice and had that more course crumbly texture rather than the flakey kind of biscuits.  With a little butter and jam, they made a nice sweet compliment to the omelet.  I will say that kolaches are not worth ordering.  They are really small  and the bread is really dense instead; there was also a strange sweet taste in the kolache that I was not a fan of at all.

My waitress was incredibly friendly and we talked a lot about where we were both from and some of the places we liked in San Antonio.  She was excellent at providing suggestions from the menu (the kolaches were my own doing) and didn’t let my coffee go empty.

I would say that Flour Power Café is pretty groovy man.

Value: 7.5/10 ($8.25 for a three egg omelet and $2 for coffee can make this a fairly expensive little breakfast, although the omelet is huge)
Atmosphere: 8.5/10 (funky colors on the interior, but not as much hippy décor as I would have thought)
Service: 9.5/10 (waitress really engaged me in conversation and made good suggestions)
Taste: 8.5/10 (great tasting omelet and biscuits; the kolaches were a miss so I don’t know how other entrees would be like; so-so coffee)
Website: www.flourpowercafesa.com
View Larger Map