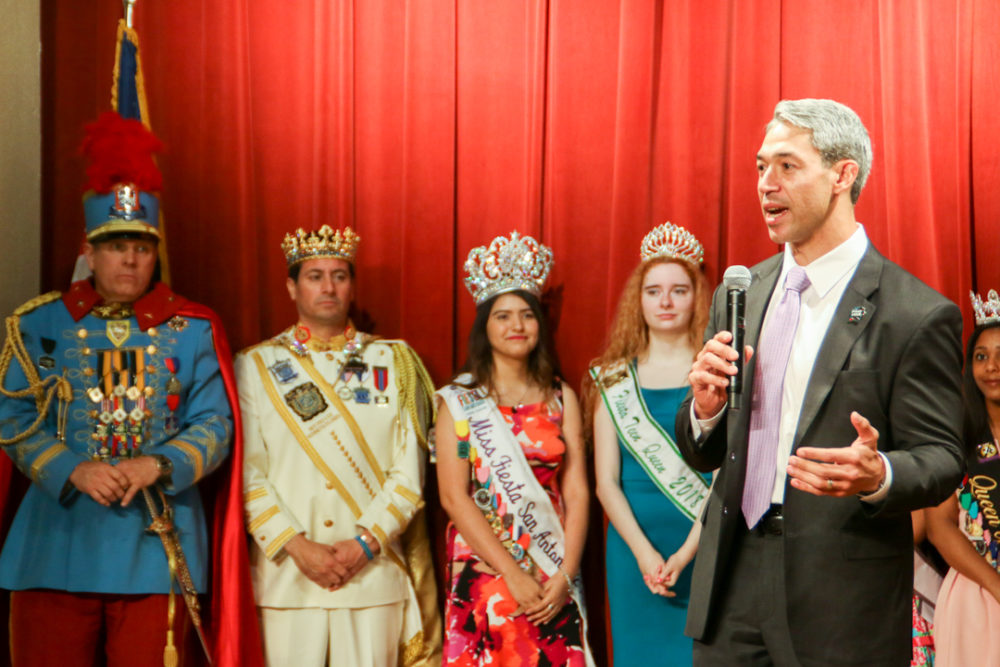 With Fiesta 2018 in full swing, we thought that it would be fun to catch up with some San Antonians involved with the festivities to find out their favorite Fiesta food and events. The responses were awesome, filled with some old favorites and new things to try. ¡Viva Fiesta! ¡Viva San Antonio!

Carla Juarez, Miss Fiesta San Antonio
Favorite Event: “Flambeau! I’m so excited to be in that parade! I love the lights, I love that it’s at night and I’m ecstatic for Flambeau.” I had to ask if she had her shoes picked out and she said, “Not yet… I’ll get there and I’ll promise that they won’t disappoint!”
Favorite Fiesta Food: “I love fruite in a cup, and I love it with chile and a lot of limón! That’s going to be my power food for Fiesta!”

Ken Flores, Rey Feo LXX
Favorite Event: “It has to be the Battle of Flowers parade. It’s where it all started, it’s the original parade. It’s become a family tradition of mine. Before I was Rey Feo, it’s something I looked forward to every year with all my kids and their friends. We started taking our kids when they were very young… there’s always a group of about 30 of us. We love going to it and it’s been just one of those traditions that we don’t want to miss, and since San Antonio is built on traditions and family and the community, that’s the event that means the most to me.”
Favorite Fiesta Food: “It has got to be, and I’m not biased by any means, but I love going to the Beethoven Maennerchor and having some German food, whether it be some sauerkraut and a Reuben and some Dunkel beer is the best combination I’ve found.”

Richard Sparr, King Antonio XCVI
Favorite Event: “Texas Cavaliers River Parade, it’s where we raise all our money we give away to the children of San Antonio. And for 2018, we’re giving away over a million dollars.
Favorite Fiesta Food: “It’s hard to beat the tacos, enchiladas and queso.”

Angela Garcia, La Reina Linda V
Favorite Event: “It is the one that we sponsor, Champagne and Diamonds Brunch! It’s the first Sunday of Fiesta held at the Witte, April 22nd beginning at 10:30AM.”
Favorite Fiesta Food: “My favorite Fiesta food is air—it’s the only thing that doesn’t have calories!”

Mari Morales, Director of Retail for Fiesta San Antonio Commission
Favorite Event: “The kickoff, Fiesta Fiesta, because that starts everything!”
“Chicken on a stick, there’s just something about that chicken! It tastes so different, it’s so good! I would stand in line for an hour!”

Michael Quintanilla, The Leader of the People’s Parade at Fiesta Fiesta
Favorite Event: “The hat contest! This is, I think, my tenth hat that I’ve made through the years! [Right now I’m wearing] the first hat that I made and I brought it back this year for the 300, and I reworked it so it’s more stable! It has eleven hats [on it] for eleven days of Fiesta.”
Favorite Food: “Gorditas! I just love the grease, I gotta have the grease!”

Tommy Flores, Fiesta Especial King
Favorite Event: “Everything! NIOSA! I like the food!”
Favorite Food: “Tacos!” He also mentioned the Arracheras at NIOSA as well!

Gloria De Hoyos, First Year Elected Fiesta Commissioner
Favorite Event: “Oh gosh, I have to pick only one! I like all of them!” So I had to ask her to pick three, here they are, “Flambeau, NIOSA and I’d have to say the Battle of Flowers.”
Favorite Fiesta Food: “It would have to be the puffy tacos!”

Tina Lumbreras, Fiesta Medal Maniacs Admin
Favorite Event: “Taste of the Northside!”
Favorite Fiesta Food: “Those meat shishkobobs things at NIOSA. My only reason to bear the crowd is for that meat on a stick!”

Tim Campion, VP of Sales and Marketing of GLI Distributing
Favorite Event: “I’ve got too many, but if I go in different orders it’s Corneyation, Alamo Heights Night, Beethoven and NIOSA. Those four are at the top, but I got a lot more.”
Favorite Fiesta Food: “The chalupas at Alamo Heights Night from Los Barrios.”

Tobias Klingelhöfer, Beethoven Maennerchor
Favorite Event: “I like all of them, but I definitely like our event Beethoven Gartenfest. It’s nice, it’s outside, you have seating, food and drinking and it’s not overcrowded. There’s dancing too!”
Favorite Fiesta Food: “The bratwurst and Reuben sandwiches [at Gartenfest].”