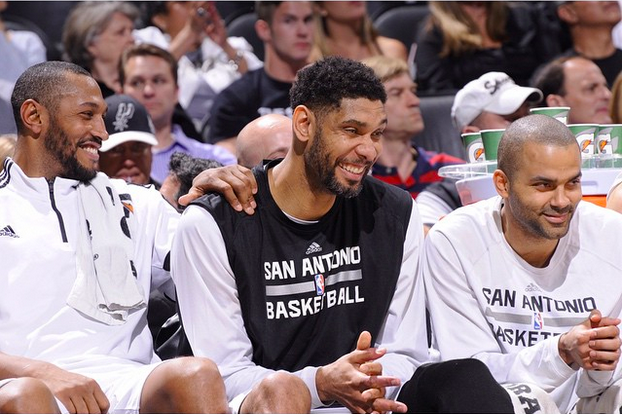 The San Antonio Spurs advanced to the conference finals in 2012 and NBA Finals in 2013 before securing that elusive fifth title in 2014. That’s five championships during the Tim Duncan-Gregg Popovic era, a dynastic undertaking that’s turned the Spurs into a model franchise whose formula is now popularized across the league.

It helps that San Antonio has recorded at least 50 regular-season wins in an NBA-record 16-straight seasons. But those wins wouldn’t count for much were it not for this club’s remarkable and consistent postseason success. The Spurs qualified for the playoffs in each of those seasons and lost in the opening round just three times.

So it’s no surprise that Tim Duncan, Tony Parker and Manu Ginobili have more playoff wins than any trio in league history. And the scariest thing about this iteration of the Spurs is that their best player may be a fourth star: 2014 NBA Finals MVP Kawhi Leonard.

Clearly Duncan and Popovich have had a lot to do with it. So too have the supporting casts so expertly assembled by general manager R.C. Buford.

To discern the real origin of all the postseason heroics, however, one has to go beyond heroes.

San Antonio’s formula is bigger than any one man. It’s commonly referred to as institutional or corporate knowledge in these parts, the synergistic chemistry and mutual understanding that tends to grow over time. That’s why you don’t see this organization making many rash personnel moves. Buford and Co. cherish continuity, and that commitment has yielded serious dividends.

It’s made for relatively uneventful trade deadlines, and the offseason is rarely cause for headlines. Excepting some minor adjustment around the fringes, the 2014-15 version of the Spurs looks nearly identical to the one that came before it. That’s probably a good thing.

Duncan certainly seemed to think so at the team’s media day in Sept. 2014.

“It’ll be fun to have everybody back here and start up where we left off,” he told reporters at the time. “That’ll be a huge boost for us in terms of not having to get reacclimated with whose role is what…and everything else. I think that brings a comfort level for us and for Pop and for everyone.”

These Spurs have been through a few battles together. They’ve known adversity together, and they’ve overcome it together.

Despite the big names, there have never been big egos on this team. Even, if not especially, Duncan and Popovich understand that this is a fundamentally shared endeavor.

San Antonio led the league in assists in 2013-14 and have remained near the top of the pack a year later, a testament to that belief in winning as an ensemble cast. Lots of team talks about sharing the rock, but the Spurs really do it. It’s no coincidence that San Antonio had the highest scoring bench in 2013-14. The starters aren’t the only ones who share.

The formula is pretty simple, really. Keep guys together. Preach the importance of actually playing together. And let talent, basketball IQ and chemistry do all the rest.

Simple, but not easy.

It takes some serious luck—particularly in the health department—to make a deep postseason run. To the extent he can, Popovich attempts to control that luck by carefully monitoring his players’ minutes throughout the regular season. It may make for fewer gaudy stat lines, but it’s key to remaining healthy when the games really begin counting for something.

The Spurs also have a way of finding their rhythm at just the right time, most recently evidenced by another strong March this season (12-3 for the month). Their late-season emergence is typical of a team that seems to master its craft just in time for the playoffs. That ability to rise to the occasion has a lot to do with experience and leadership—and everything else the Spurs do so well.

San Antonio’s postseason success may not be as certain as death and taxes, but it’s among the safer bets in professional sports. That success is rare and not by accident. More than any team in basketball, these Spurs have left their collective fingerprint on the playoffs for nearly two decades.

And they may not be finished.