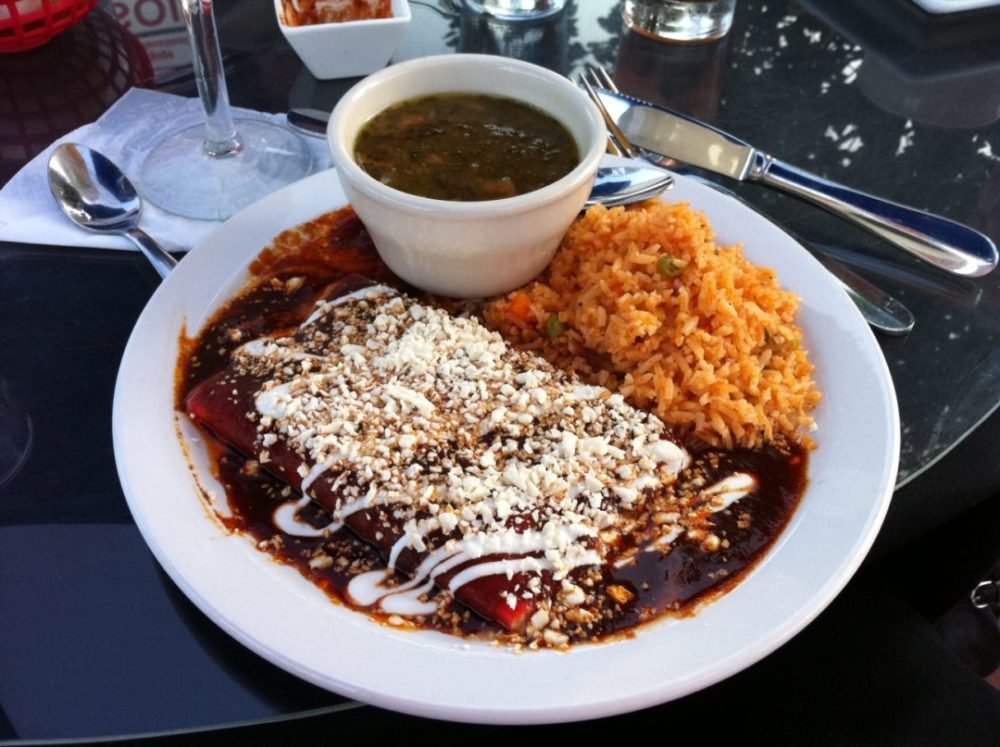 El Mirasol is one of my mom’s favorite restaurants in San Antonio. She would always eat there when she traveled to San Antonio with her previous job. When she visited me after I moved to San Antonio six years ago, El Mirasol was one of the first restaurants we went to. Unfortunately for my mom, I am always finding new places to eat when she visits town, so we rarely visit the same restaurant twice. Since it had been a while, I decided that we should go dine at one of her favorite spots.

While the inside of El Mirasol is charming with the red tiled tabletops, the real action is happening outside on the patio. Even though it was a 100+ degrees outside, the patio immediately to the right of the entrance was packed so we had to sit at the secondary patio up the stairs. This was not a problem because there was a nice breeze and the sun was setting.

Obviously a cool drink doesn’t hurt, so I ordered the house margarita which is very refreshing and strong. We all stayed late into the night talking and trying other drinks, but I have to say the drink of the night had to be the strawberry mojito that my girlfriend ordered. The sweet taste was understated and not too sugary (unlike the overbearingly sweet peach mojito she tried later on) and was complimented nicely by the mint. As much as I like margaritas, this might be the drink that you should check out on your next visit.

We had a great server who was very engaged with our table. She overheard our conversation about how my mom doesn’t get to come to El Mirasol often and how she pines for their cinnamon-y tasting enchiladas. Our waitress spoke up and had some bad news for my mom: they had changed their recipe to the ancho sauce to be spicier and did not have as much cinnamon in it. She suggested that we try a sample to make sure it was what my mom wanted to order.

Much to my mom’s disappointment, the waitress was spot on in her assessment. There was hardly any cinnamon to the sauce any more. The waitress did have a bit of good news and said that their sister restaurant, Soluna, still had the original recipe.

My mom’s loss was my gain; I really enjoyed the newer version of the sauce and decided to order the plate myself with a side of rice and borracho beans. The enchiladas were delicious with a spicy kick from the ancho sauce that was smoothed out by the farmers cheese and crema. The rice is some of the best in the city and enjoy their borracho beans.

(A quick aside on the borracho beans at El Mirasol. I always like to ask restaurants if they use beer in their borracho beans (for you gringos like me, borracho means “drunk,” hence the beans are made usually with a can of beer) and on a visit to El Mirasol many years ago I asked my waitress this question. She didn’t know and went to ask the cook in the back. The waitress came back and said, “I have some bad news and some good news about the borracho beans.  The bad news is that they are not made with beer. The good news, however, is that the cook said he was drunk while he made them.” This is one of my favorite stories ever and to this day I tell it whenever I order borracho beans!)

I look forward to taking my mom down to Soluna the next time she is in town to see if their enchiladas antiguas taste like she remembers them, but regardless, I had a great night at El Mirasol filled with wonderful food and even better conversation.