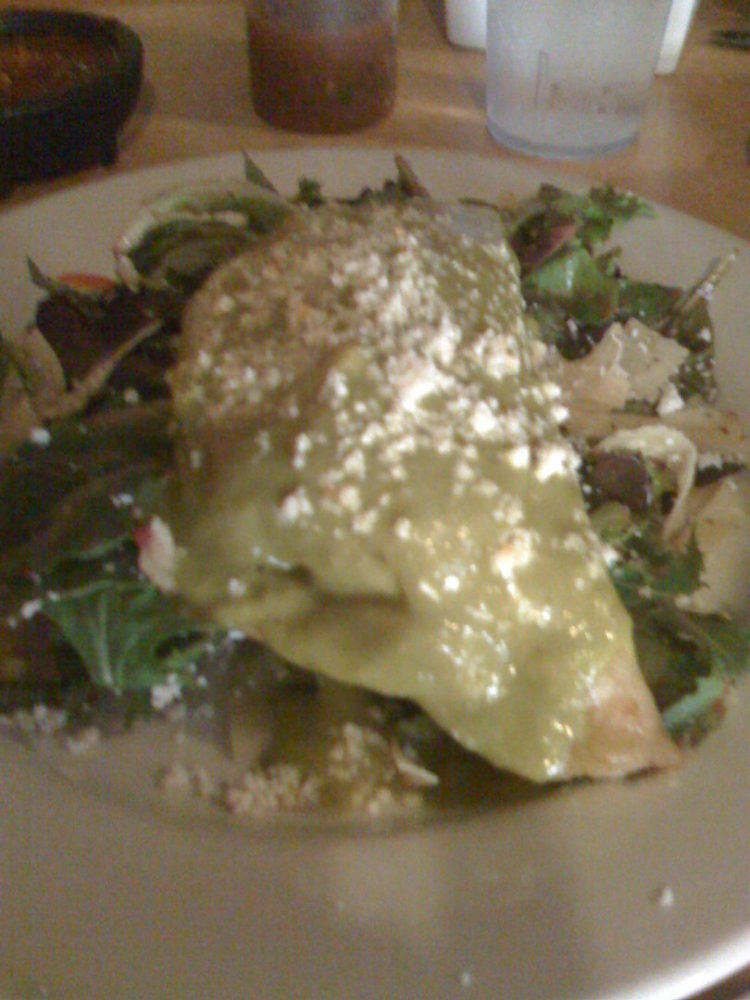 The great thing about having this website is that a lot of my friends give me suggestions on where to eat and what to order.   One such friend had suggested that I visit El Mirador the previous day, and since I had my parents in town, I decided to go there and try something new for the both of us.  (Coincidentally, a lot of people have panned me for not having bad reviews; I think I have had a couple now, but I am (1) trying to write about some of my favorites mixed in with new restaurants I hear about and (2) when folks find out about my website they most often suggest a place that they think is great and so I go try it.  I guess it is due to the fact that I have friends with good taste that I don’t have a lot of bad things to say!)

My friend Mike had told me that there are three things you have to try at El Mirador: the empanada as an appetizer, the house margarita, and the puffy tacos.  I decided to take his advice verbatim and did just that.

First, the empanada is a jumbo size that could give 3-4 people a nice appetizer before lunch.  It is stuffed with chicken, cheese, a mushroom that grows on corn, some sauce, and topped with a poblano cream sauce.  It is served over a salad that had a nice house vinaigrette dressing and red bell peppers and jicama.   I don’t typically order appetizers, but not only did Mike stress that I should get this, the waiter also said that the restaurant is renowned for it – I was not led astray!  The empanada was absolutely amazing and was just jam packed with flavor.  The cream sauce had a nice bite to it, but the spice was cut by the salad.  I think I would just like to order it as a meal for myself!

The house margarita was pretty good; it was not overly syrupy and had a nice fresh taste to it.  Again, I think it complimented the empanada and the chips and salsa.  The salsa was slightly roasted and was served in a little carafe so that you could refill the bowl yourself.  The chips were multicolored; I always like that.

I will say that while the puffy tacos were good (and surprisingly stayed together (it is my theory that you have like 20 seconds to try to eat a puffy taco when the waiter brings it to you before they split open)), they were also kind of unmemorable compared to my parents dishes.  The charro beans on the other hand were awesome and a true highlight of the dish.

My dad got, what I thought, was the best meal at the table, the Jessica Enchiladas.  They were chicken enchiladas topped with the same poblano sauce as the empanada.  I think I would like to order that next time.

Finally, to conclude the meal, the waiter brought us a tres leches cake for dessert.  Now, I love tres leches cake since it was introduced to me when I moved to San Antonio a while back.  The tres leches at El Mirador has to be the absolute best in the city.  It is amazingly sweet, swimming in some evaporated milk, and has some homemade whipped cream to top it off.  Get a cup of coffee and you will be loving life.

Value: 9.5/10 (dinner entrees run around $10 – $12 and are incredibly tasty and presented quite nicely)
Atmosphere: 9/10 (very nice restaurant right on the fringe of King William)
Service: 10/10 (unbelievable service; the waiter was kind to offer suggestions and really was nice to our table)
Salsa: 8/10 (the salsa had a mild bite to it and was fresh)
Taste: 9.5/10 (the empanada is a must have; the puffy tacos were ok but the other entrees I had were nice; tres leches is the best in the city)
View Larger Map