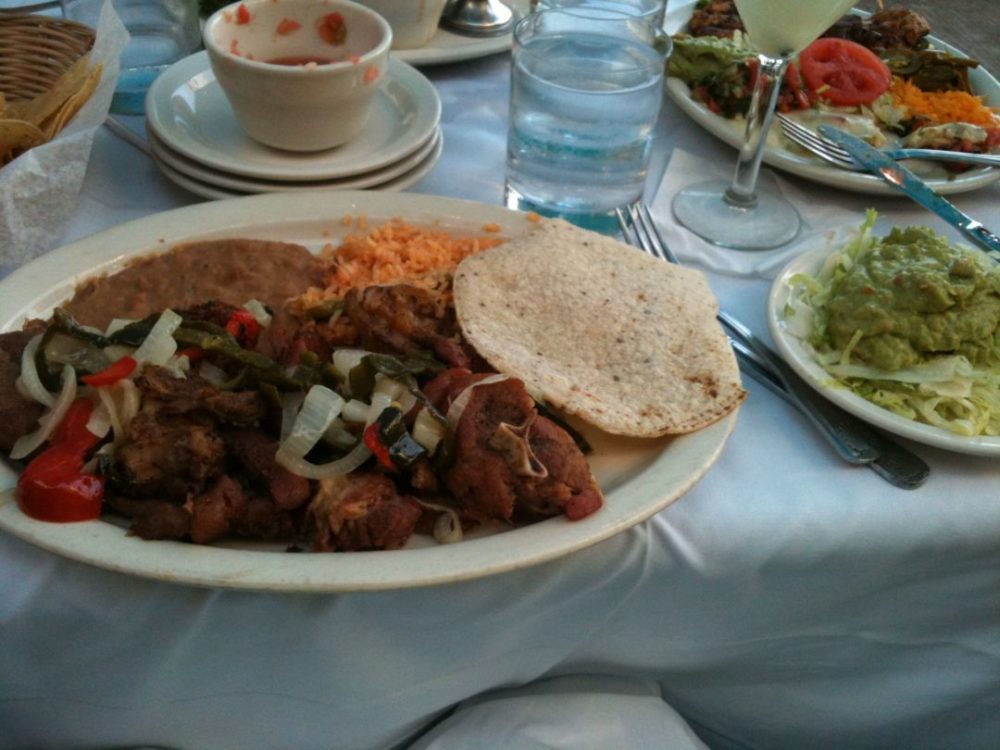 The blog has been around for a little over a year now, and I realized that I had not yet reviewed my favorite restaurant in all of San Antonio, El Jarro de Arturo. I have told countless number of people how great their margaritas and food are, but I guess I completely forgot to make a post. This is about to be remedied.

El Jarro is a family owned business since 1975 and is run by owners Arturo and Sandy Cerna. You can really tell the emphasis is on family as you will see many of the same folks working in the restaurant year to year. I really like it because in addition to the management, many of the waiters and staff have been there for a while. You really feel like part of the family when you dine there.

Entering the restaurant takes you away from the hustle and bustle of Highway 281 and transports you into the interior of Mexico. On the weekends, there is a band that will play a combination of Latin and 60s/70s pop music. You can even shake it on the smallish dance floor.

The outside patio is nice, however, it is pretty difficult to get away from the fact that you are in a strip mall next to a major highway and Party City. In spite of this, they do a pretty nice job of trying to set up an oasis to escape the work day with one of their patented margaritas.

Speaking of, I think that the margaritas at El Jarro are the best in the city. Don’t waste your time with a frozen one or one with a swirl. Opt instead for the real deal, The Arturo. Made with Patron, Cointreau, and lime juice, this potent mixture is served in a martini glass instead of the more traditional rounded margarita glass. The margarita is $8 but packs a punch that makes it completely worth the price. A word to the wise: if you will be drinking a couple of these you better plan on having a designated driver for the trip back home.

Their chips and salsa are pretty addicting. The salsa is always made fresh and pretty chunky. It is almost like a pico de gallo but not quite; depending on how hot the jalapeños are that day it can be medium to really spicy heat. Arturo recently talked to the San Antonio Express News and gave them his salsa recipe which is pretty quick and easy to make. Apparently they make 40 gallons of it a day!

If I have a friend visiting me in San Antonio for the first time, we will inevitably make a stop here for dinner. For all first timers, I make sure that we order the Queso Flameado as an antojito (or appetizer). As opposed to queso that most gringos are used to (the kind at Super Bowl parties), this is more of a thicker consistency that has some peppers and chorizo mixed in with it. They will usually bring it out and light it on fire while mixing all the ingredients together. It is best eaten on a corn tortilla.

In addition to having the traditional Tex-Mex fare, El Jarro offers a nice variety of Mexico-Mex including Norteño and coastal food. This is why I typically rotate between three main options for my meal:

If I am feeling a little Tex-Mex, I usually order the El Jarro #3 which is two cheese enchiladas, a crispy taco (be sure to sub in the puffy taco!), rice, beans, and guacamole. At just above $10, this plate will leave you completely full and satisfied.

For all you seafood lovers, you won’t be remiss to go with the Red Snapper a la Pepe. More on the expensive side (about $22), the fish is served with a tequila tomato sauce that is really nice.You also get a Salad a la George with this meal, which is a Romaine lettuce salad with mango, jicama, red bell pepper, purple onions, avocado and a vinegar dressing. The salad almost equals the fish; I love this meal because after I eat it I am full but I do not feel weighted down.

The third option I usually go with is a Norteño delicacy called Cabrito, or baby goat. I know firsthand that this might sound strange to a lot of folks because when I moved to San Antonio 5 years ago and visited El Jarro for the first time I was kind of shocked to see it on the menu. I kept going back to restaurant and wondered what it tasted like until one day I got the courage to ask my waiter about it.  He said that it was a specialty and one of his favorites so I ordered it.  I’ve been hooked ever since.

Apparently, I’m not the only one. In 2009, a foodie for the New York Times wrote an article about how he learned to love goat meat. The taste of cabrito is really nice because it is so tender and really isn’t a greasy meat. I was a little afraid that it might have a gamey taste (I don’t like venison for this reason), but I don’t think it is gamey at all. Cabrito is good either by itself or by making a taco on a corn tortilla with a little bit of guacamole.

After telling folks how much I liked El Jarro’s cabrito, some of my Mexican friends told me I should check out El Rey de Cabrito in Monterrey, Mexico. Always up for an adventure, a buddy and I took a midnight bus down to Mexico back in 2006 with the express interest of getting the cabrito. I will say that El Rey de Cabrito is better, but it is only by the slimmest margins.

El Jarro is one of my San Antonio staples. I go there to celebrate birthdays, new jobs, or life in general along with going there to commiserate after a bad day or a failure. It has been a place to take friends and family the first time that they visit me in San Antonio, and a place to return time and time again to catch up. In short, the overall friendliness of the staff and exceptional food at El Jarro is San Antonio to me.  God willing, their doors will be open for years to come.

Value: 9/10 (you can get a Tex-Mex dinner for $10 that will fill you up or some higher cuisine for $20; the margaritas are $8 but pack more of a punch than two of the typical $4 ones elsewhere)

Atmosphere: 9/10 (Inside atmosphere is really nice and cozy; the patio is good, but you are in a strip mall)

Service: 9.5/10 (really nice servers who will guide you through the menu; I would give it a 10 but the thing is that the service can sometimes be slow; don’t worry, you are in the land of mañana, sit back, relax, and visit )

Salsa: 10/10 (different than most in San Antonio, chunky with a nice heat; don’t forget the recipe seen here)

Taste: 10/10 (my favorite spot in town; if you visit me for the first time we are probably going there)