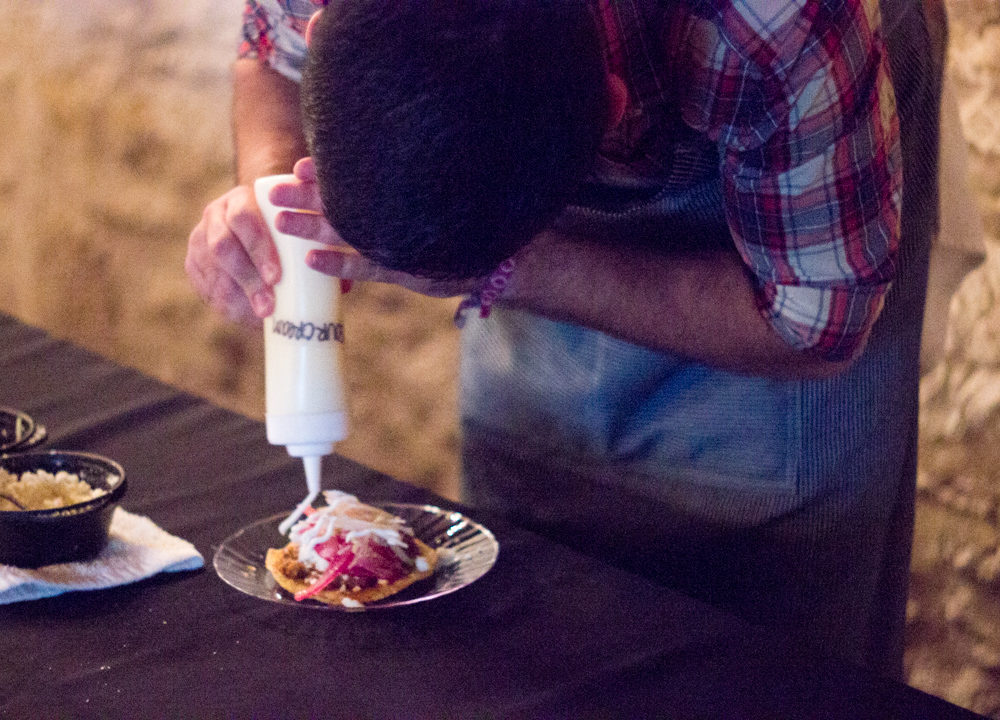 Dinner Day is a demo for the members of the Break Fast & Launch cohort, a pilot program meant to accelerate restaurants and all things culinary here in San Antonio. On that night, each team presented a final dinner for invitees of the event.

Four teams. Four very different dishes. As Peter French, coordinator of the event, told me, “A chef may be able to whip up something really unique and spectacular but if they’re not well-versed on the business side of things, a lot of the time, we see those startups fail more often than not.”

I simply nodded. I’m not sure if I’ll ever know what it’s like to own a restaurant or bakery or something as cool as “that darkly-lit bistro down the street,” but I’m glad someone cared enough to help our local culinary talent expand and grow.

As I entered the Elizabeth Huth Coates Chapel at the Southwest School of Arts, I was immediately directed to four parallel tables in the atrium of the chapel. Though the event was invite only, the feeling of openness I took away from the staff working the event and the companies was a much-needed tonic; these were not high-opinioned critics, just regular people who wanted to craft something savory for your palette. I crossed the hardwood floor over to the cash bar, grabbed an import and settled in.

Choosing my first table in a random fashion, I landed in front of Mezcaleria Mixtli, a restaurant serving out of Olmos Park. As one of the cooks finished my plate, another notified me I would be sampling Tinga de Puerco on a tostada. Biting into the dish, I noticed how the small stalks of mint augmented the succulent slow-cooked pork (eight hours, in fact). Topped with drizzled sour cream, the dish was a definite highlight of the evening, corroborated by many of the evening’s guests.

I then crossed the aisle to Bombay Salsa Co, which serves Mexican/Indian-infused food out of a truck near UTSA Boulevard. As I approached, cook Hitish Nathani had been turning over quesadilla halves on a small black skillet. He explained with a smile the contradictory blend of cuisines.

“It’s not something most people are used to,” Nathani said. “But once you break through that wall, I think in the end, we’re serving food that was meant to be loved and savored equally.”

I soon found myself scarfing two halves of the Tandoori Chicken Quesadillas that Nathani crisped just seconds earlier. The quesadillas were served with an in-house (in-truck?) queso and tamarindo sauce that were beyond perfection.

2 The Max Catering was by far the most peculiar and one of the most rewarding. Their impeccably presented course consisted of coffee-crusted steak bites with a chocolate stout sauce. To accent the steak, there was also a fresh strawberry soup on the menu.

At first, I was skeptical. Could coffee and steak possibly fare well together? An odd couple for sure. Chef and Founder Maxine Dickinson (who is a vegetarian) stated that she wanted to prepare a dish that showed she knew how to do a steak with a twist. Mission accomplished. I hope she throws on her catering menu.

The final stop was Cocina Heritage, a catering service that prides itself on using native recipes of Central and Southern Mexico. They served a traditional conchinita pibil with xnic pec (Mayan for “dog nose”). Slow cooked in a heap of banana leaves, the achiote-marinated puerco was so tender and well seasoned that I damn near offered to buy some on the spot. An absolute perfect ending.

As the event began to wrap, I noticed most of the chefs gathered outside the chapel doors for cigarettes and discussions about future plans. Attached to this band of “foodies” (as they’ve described themselves) is a real sense of camaraderie that no doubt carries into their dishes. There’s also an unbridled love for the art and a succinctness to it: the way a sauce needs to flow across a plate or the acidic balance of chopped onions on a dish.

Events like Dinner Day is where foodies thrive, able to abscond from their regular jobs to discuss what they love and how they go about sharing it with a customer. If you plan of joining one of these conversations, be warned, the topic of such discussion is always edible.