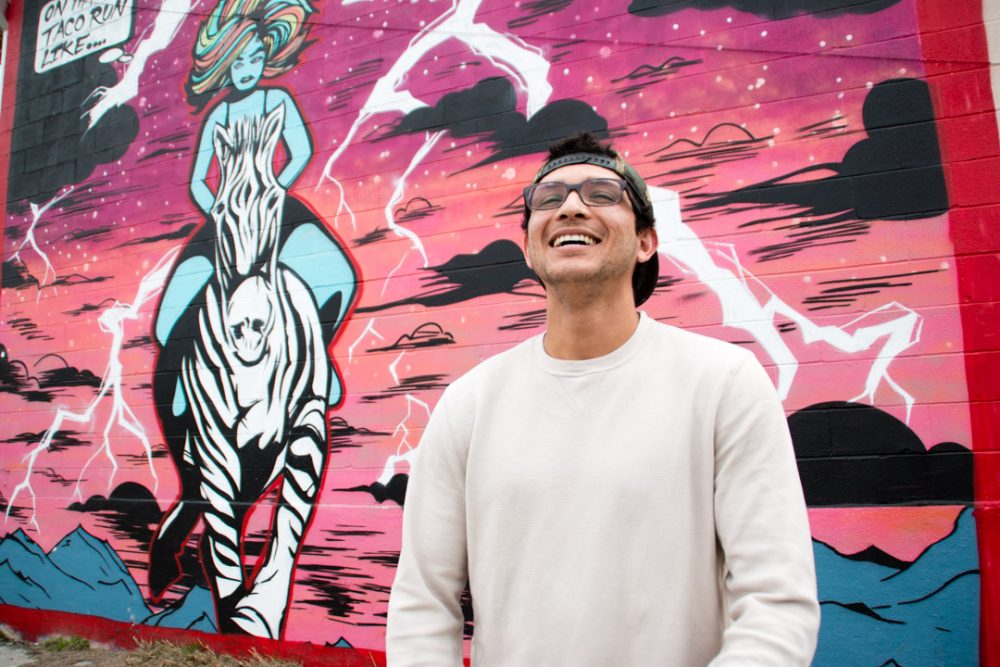 The mural game in San Antonio is hot—whether it’s the dynamic duo known as Los Otros or artists that have come up through the San Anto Mural Program, our city is blessed with a tremendous amount of larger-than-life art. And one individual who has been making his mark for the past three years is the artist Colton Valentine.

I first became aware of Colton after catching his “2AM Taco Run” piece on the side of a mechanic shop on Jones Street after leaving the San Antonio Museum of Art with my daughter. I started following him on Instagram (@colton_valentine_) and was blown away by how prolific he was—it seemed like a new piece was going up monthly, often in cities that spanned across the country. I finally found a way to catch up with Colton to find out more about where he came from, what serves as his inspiration and what’s in the future.

From the Land of Angels to San Antonio

Colton is originally from Los Angeles and recently came to San Antonio when his then girlfriend, now wife, got a position in the Alamo City. He knew that the relationship was real and three years ago moved to Texas with her.

“I had just got in a motorcycle wreck and I was just like, dude, like I’m tired of this [being in LA]. I’m going to go with her back her up,” Colton said. “So we came by here to Texas together as a team. It’s been fun.”

After moving to San Antonio, he ran into a bit of trouble with the law—Colton was booked on a DWI charge and for all-intents-and-purposes was confined to the house. Around this time his great aunt, who he refers to as his grandma, had a conversation with him that set him on this path of pure hustle.

“I got a DWI the first five months I moved down here. Once that was all done, I was focused on creating. I was free,” Colton remembered. “My grandma was like, ‘Don’t sit out here and waste your life and waste your talent.’ Ever since then I was like, all right, watch, like I’m going to try something new. Something different and work harder than everyone else and just go in full energy, full attack.”

After that conversation he decided to go big—the canvas was too small for his ambitions so he turned to making murals. And we’re talking about BIG murals at that. His first piece featured Batgirl and was 25 feet tall and 15 feet wide, a size that was larger than anything he had ever done.

Starting out, Colton turned to geometry to help solve for the perspective. He would make a grid on a piece that he wanted to replicate and then scale it up dramatically on the wall—for example, an inch-by-inch grid on paper may have got scaled to a foot-by-foot. While a lot of muralists and street artists turn to projectors, this grid system enabled him to focus in on one piece while retaining the proper perspective. But in his third year of making murals, he’s starting to “see” things differently and no longer needs the grids.

And the reason his pieces are appearing all over the country? Colton does specialty retail installations for a company that has clients all over the country—from painting, applying custom vinyl or installing art. As he travels, he uses his spare time to throw up some murals, such as this one featuring Deadpool in North Carolina.

“Growing up, I read comic books and the super heroes were larger than life to me. They inspired me and helped me get through shit,” Colton told me outside one of his murals. “By me painting and comic books on the walls literally makes them larger than life as well figuratively for kids and the youth. And it’s a way to relate to people because they think it’s fun.”

In the mural on Jones Street he features Sheena, the first female character to be the title-star of comic book back in the 1940s. Sheena is on top of a zebra galloping off with the phrase, “On that 2AM Taco Run Like…” (I mistakenly thought it was a tribute to She-Ra originally—blame it on the fact that my kids have been playing with my He-Man figures recently!)

“I painted her blue because blue represents the sadness she’s feeling for the tacos,” Colton told me in an Instagram message.

This part of Jones Street had always been kind of drab—a collection of warehouses, often abandoned, in pretty neutral colors. The pinks, purples and blues definitely stood out. I remembered thinking how awesome this piece was and at the time felt sad that it would probably be covered up since it was so out in the open and accessible: it’s like an open invitation to be tagged. But over a year later, the mural remains intact and unblemished, most likely because folks who’d want to tag it see the talent behind it. And can maybe even relate to that early morning taco run.

Another mural that many folks recognize is the Batman on San Pedro. To me, the mural is as much a tribute to the caped crusader as it is a commentary on how the minutia of social media “matters” to someone of Batman’s stature. Like what the hell would Bruce Wayne care if he got a like? And is he sad that it was only one? Regardless, this spot is irresistible for Instagrammers to post to their feed.

But recently, Colton has turned to featuring more hip-hop artists, such as 21 Savage and Soulja Boy. The latter subject played on a popular meme that happened in January 2019 when rapper Soulja Boy went off when a commentator on “The Breakfast Club” said that Drake was the biggest rapper in the world.

“Draaaaaaaaaake?!” Soulja Boy said incredulously as he said that he was responsible for Drake’s success, even saying that Drake ripped off some of his phrasing and beats. The moment went viral and Colton put up the mural on the side of Supremes Sports Bar facing the adjacent 7-11. It was the first time that he used the Adobe Illustrator program to help with a piece—something he may look to do more of for later works.

“I spent like two hours at home laying on the couch, drawing that shit up, just messing around and then painted it for fun,” Colton said. “And that’s the mural that’s talked about the most. I’m like, ‘No, this is not me. I can do better, this was just for fun.’”

It didn’t matter that Colton felt the work was inferior to his others—the mural went viral after being posted to the @worldstar Instagram account, a go-to hip-hop resource for 21M+ followers. That success led to him creating a mural honoring 21 Savage with another in the works.

“[Soulja Boy] took a life of its own. I’m just very thankful for that. That’s all I can really put to it in words,” Colton said. “People hit me up and they’re like, ‘Oh hey, I finally got my picture with your mural!’ I still can’t believe it, that this happened through something fun essentially. I guess that’s what I’m most proud of is that I really, I’m just having fun.”

Looking to the Future

Talking with Colton make you realize how little you have going on in your life at the moment. He speaks of his job and the travel. The murals he wants to make—some purely for fun, others as brand collaborations with brands like a shoe company. Being so close to Austin, I wouldn’t even doubt that there may be something going up during SXSW that carries a @colton_valentine_ signature.

What I’m most excited about is that Colton has his eyes towards something big in 2019—a show featuring smaller scaled works, hip-hop artists and cocktails.

While all these things may be a piece yet to be painted, one thing is for certain: he isn’t slowing down.