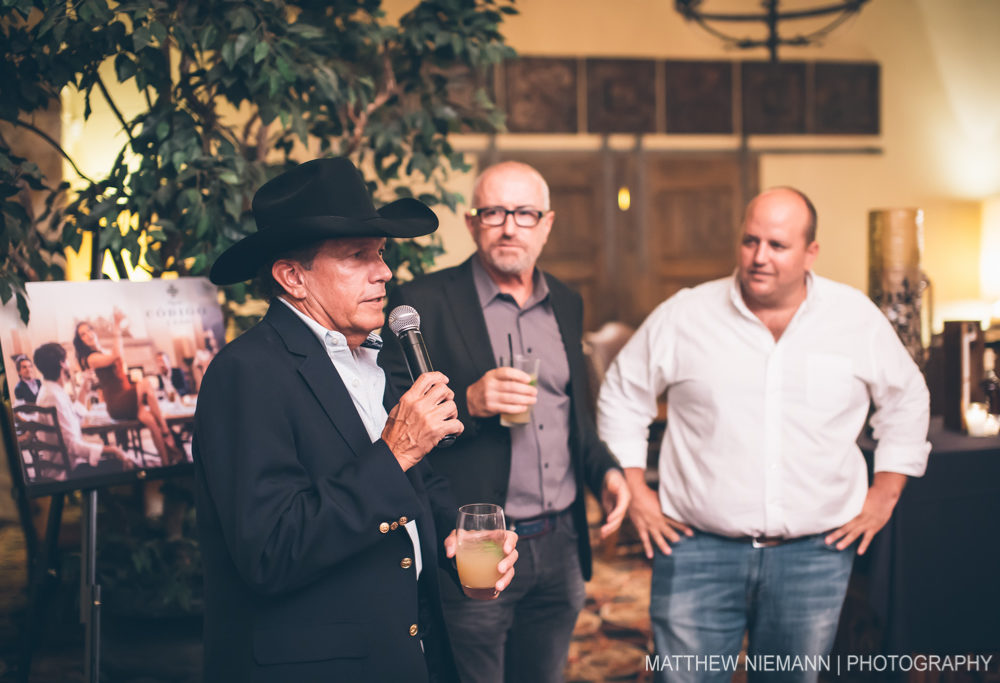 As a person who loves fine spirits, it’s hard to beat a tasting of quality tequila on a weekday night. But this past Tuesday, I not only got to sample four different Tequilas from Código 1530, I got to do it alongside George Strait. Let’s just say that this tasting is one for the books—and not just because El Rey was there. The tequila—which launches to select markets this Fall—was pretty darn good.

The Origins of an ‘Unnamed’ Tequila

While the tequila inside Código 1530 bottles has been produced for five generations, the brand didn’t come about until recently. A resident of Cabo San Lucas, co-founder Federico “Fede” Vaughan would routinely share this ‘nameless’ tequila with his buddies over a game of golf.

“Every time we play golf, I would take them all out there [to my house],” Vaughan said. “It came to the point that every single friend I had became addicted to this [tequila].”

Businessman Ron Snyder, the former CEO of the Crocs Footwear company, was one of those friends. But rather than just enjoy the fine spirit, the two decided to form a company. “Three years ago—two years ago—the dates are a little fuzzy because of the lots of tequila we drank, and we decided to launch it,” Vaughan recalls.

And they brought in another friend from the Cabo course to be an investor as well—none other than the King of Country himself, George Strait. “I met these guys in Cabo and started drinking better tequila, and when Fede brought this stuff out and gave us a taste of [Código 1530] it was all over after that,” Strait said.

Favored by the King

From “Family Tradition” to “Whiskey River” to “Friends in Low Places,” it seems that whiskey is the spirit most associated with country singers. So you may be wondering why Strait got involved with a tequila.

“Everybody that drinks have had a shot of tequila at some point,” Strait said. “Normally it’s a shot with a chaser of lime and salt to try to get the taste out of your mouth as fast as you can. So I’ve kind of drank tequila that way, when somebody says, ‘Ah! Let’s do a shot of tequila!’”

And Código 1530 has become part of a tradition for Strait when he’s on the road touring. “Me and the guys, it’s kind of a tradition for us after the last song of the night, we come off stage and before the encore we’ll do a shot of something,” Strait told us. “Well, now of course, we only do Código and the guys are goin’, ‘Where did you get this stuff? What is this?’ And it’s just the best.”

Meaning of the Name

The name of the brand has special meaning that honors both the way the tequila is produced as well as the place it comes from.

“We’re inefficient and we’re proud of it,” Vaughan said. “We don’t produce as much as the biggest brands, we produce the right way, which should be the only way.” This is the code that the brand lives by, hence the name Código.

The second half of the brand name comes from the fact that their tequila is produced five minutes outside of Tequila in a town called Amatitán. The city was founded in 1530 by the Spaniards and has a slogan of “donde todo empezó,” which means “where it all began,” an allusion to the fact that tequila was first produced in this part of Mexico.

“We use the best agave…because we don’t grow our own. We pick the best agave available,” Vaughan said, adding that “if the best agave is not available we don’t produce.” The agaves are harvested from the Lowlands, the tequila producing region known for having rich, volcanic soil. While there is some debate as to whether the province matters at all, other folks say that the Lowlands tequila imparts an earthier finish.

Admittedly, I doubt that you’d find any distillery saying that they use inferior agaves, but I did find the next two points intriguing when it comes to the production of Código 1530. First, the yeast that’s used to ferment the juice.

“The yeast comes from their family bakery that has been in their family for a couple generations. It’s bread yeast and not alcohol yeast and takes four days to ferment instead of eight hours,” Snyder said. “And that’s a big difference and you can taste that in our Blanco, in our Reposado and our Añejo.”

Código 1530’s aged tequilas are done so in French Oak wine barrels out of Napa Valley. Because of some of his business dealings in Napa, Snyder said that he was able to cut a deal with some of the best wineries to get their used barrels—the distillery then chars the inside and ages the tequila there.

“The guys that run the distillery, they’ve been using good wine barrels, not quite as good as this,” Snyder said. “That’s the only thing that we could figure out that we could improve on: using a little bit better barrels.” He noted that the flavors from these higher quality wine barrels were best expressed in the extra Añejo product.

There is a final aspect of the Código 1530’s tequila to note: it’s not produced using the tahona process (either a stone or more modern roller mill). I mention this because the marketing emphasizes tradition and this is one specific point where they break with tradition.

Rather than using the traditional tahona method where the agave is crushed and the fibers remain with the juice for a period of time, the team has chosen is to extract the juices by shredding the cooked agave. This enables the distillery to solely withdraw the juices without any of the pulp—Código 1530 said their more modern method results in finer tequila. I’m not sure if it matters or not, but whatever they’re doing is working.

First Impressions of the Tequila

The Blanco was quite good, especially as one would have the lowest expectations of the opening offer. Served to us at room temperature, it was still very smooth and had just the slightest burn. The Reposado had a more intense flavor and a bit of a kick that gave it character. I also found it to have an enjoyable warmth to it similar to a cask strength whiskey.

The two of the premier tequilas, the Añejo and Origen (what they call their Extra Añejo) were poured at a serving table. Both were very good and had complex flavors courtesy of that wine barrel aging, but Origen had that extra depth of flavor one would expect from extra time in the barrel. Overall I enjoyed the Reposado for its punch and the Origen for its refinement as the best two tequilas sampled that evening.

Código 1530 will be available at different San Antonio locations, including Twin Liquors, Spec’s, Alamo City Liquor and K&B Liquor in New Braunfels. If you’re looking for a chance to get beyond that “spring break” tequila, give Código 1530 a chance—after all, if it’s fit for King George, you know that’s it’s going to be good.