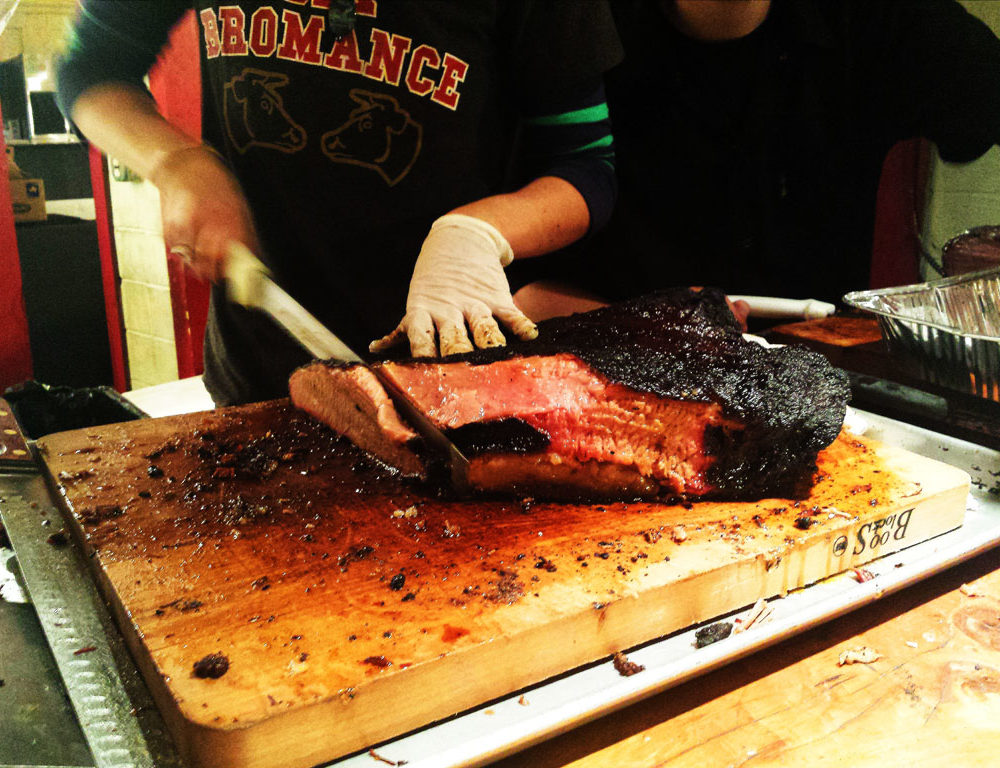 For some, the San Antonio Cocktail Conference started a day early at Two Bros BBQ Market. Jason Dady, the chef behind the eats, is also the owner of several San Antonio restaurants including Two Bros, Tre Tattoria, BBQ Market and DUK Truck. HIs BBQ dishes at the event appealed to everyone’s inner Southern foodie and they were nicely balanced with cocktails created with Old Forrester Bourbon.

Two Bros happened to be the perfect setting for a BBQ and Bourbon event. It is a blend of traditional southern fixtures—like wooden tables, food served in an assembly line fashion and giant rolls of paper towels that substituted from napkins. The goal of the evening was clear: eat as much as you want, drink as much as you want and have a good ol’ time. I was able to do all three!

I began my eating excursion by asking myself the simple question, “Where’s the meat?” In the corner of the room, I found just what I was looking for. Brisket, baby back ribs and ham were being sliced and handed out to a line of hungry people. The meat was carved before our very eyes and we were able to point to the slice of our choosing. Of all the meat I was able to sample, the brisket was my favorite.

Now as any good Southerner knows— quality brisket should be 1) well seasoned and 2) as tender as possible. This brisket was able to accomplish both! It was not overly seasoned and still retained its somewhat natural flavor. And secondly, it was so incredibly tender that it even fell to smaller pieces with only the touch of a fork. Now, this is a sign of some quality meat makin’!

But BBQ alone does not make a BBQ and Bourbon event—it was time to find some bourbon based cocktails to accompany my meal. The first cocktail that I sampled was created by Joshua Finne and dubbed “The Kentucky Washington.” This sweet drink was a combination of Woodford Reserve, apple brandy, lemon and cinnamon syrup. The apple brandy was the star of this cocktail and was complemented by a slice of apple arranged inside of the glass.

With all of these fine meat slices and cocktails in hand, I moved to find the side dishes that go along with BBQ so well. A sign above the station for side dishes exclaimed “Pickle + Sauce Bar” but it was so much more than that. Mac and cheese, refried beans and creamed corn were in gigantic trays that were refilled immediately after they went empty. My favorite was the creamed corn. It’s not often that you find this dish at your average restaurant, so it was very special not only in taste but also in rarity—I loved the sweetness and creaminess of this dish.

A classic BBQ meal wouldn’t be complete without the salty-sour taste of pickles and onions, so I headed back to the Pickle + Sauce Bar. But since I was up, I stopped by for a few more slices of ham and brisket to go with the pickles. The sour flavor of the pickles offset the hearty flavor of the meat combining to create a harmonious taste.

I walked across the room to the side where the bartenders were working hard to make seemingly unlimited cocktails. I discovered my second favorite cocktail of the evening—“the Houdini” (with a name like that you know it’s going to be good). The Houdini was a blend of bourbon, port and maple syrup. I know what you’re thinking, “Maple syrup…wait what?” But it was genius! Maple syrup was a great way to add a lingering sweetness to the cocktail that soon disappeared and had me looking for the Houdini again.

BBQ and Bourbon brought it—there was fantastic food by Two Bros. BBQ Market and memorable cocktails. I am excited for tonight’s Waldorf on the Prairie event at the St. Anthony Hotel—this elegant event will feature jazz sounds from The Doc Watkins Trio and soul music from The Night Owls. Tickets are still available online and I’ll see you there!