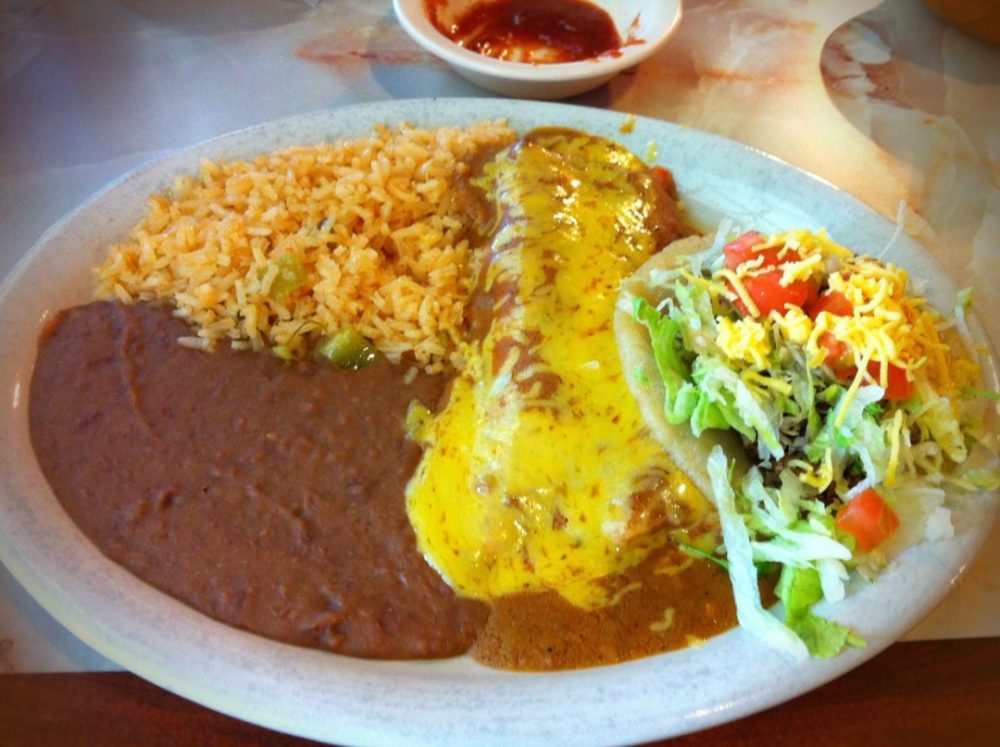 For Lent I decided to only eat out for one breakfast, one lunch, and one dinner a week (unless I am traveling).  In order to continue to publish content to the blog, I really have to plan out my meals to make sure that I try at least one new spot a week.  This past week I checked out Chayitos for lunch.

Situated on the corner where DeZavala turns into Babcock, Chayitos was formerly known as Emmy’s.  A lot of folks have told me good things about this restaurant and I was looking forward to see if there could be a good hole in the wall Mexican restaurant on the Northside.

The interior has an old school Mexican diner type of feel with as much Spanish being spoken as English.  The dining area is pretty large and in the corner is a projection TV that shows a strange assortment of music videos.  While we were there we saw Whitesnake, Bruno Mars, and early 90s U2 videos; it is extremely random.

Even though it was a Saturday, they had a lunch special that included two cheese enchiladas, puffy taco, rice, beans, and an iced tea for $5.49!  I couldn’t believe that I could get that kind of price on the weekend, and knew that I had to get the special.

The chips appeared to be deep fried versions of their corn tortillas as they come out extremely hot and crispy.  The salsa was so-so and seemed like it had a lot of canned tomato sauce/paste in it.  In spite of this, it did have a decent enough taste and worked with the very crispy chips.

When I got my plate, I was impressed by the amount of food I was given.  While the puffy taco wasn’t all that puffy (it seemed more like a gordita), the picadillo meat that came in it was very flavor and spicy.  The enchiladas were really good as well, with a thick sauce and melted cheese.  Even though I like my gravy to have meat in it, these enchiladas really brought it.

The old standards really made the meal.  The rice and beans had such a good taste that I didn’t even bother to put salsa on them – a rarity of any restaurant I visit.  Although the tortillas were not very thick, they were extremely chewy and had a lot of substance to them.  With a little crisp on the outside, they could have made a meal on their own with some honey!  Even though I had tons of food, I managed to take down a second tortilla because they were so delicious.

I am glad to have finally found Mexican food on the Northside that not only tastes good, but is also priced right.

Value: 10/10 (if you stick with the daily special you will get a ton of food and tea for less than $6 (even on the weekend!), otherwise it is probably $7 a plate)
Atmosphere: 8.5/10 (old school Mexican restaurant feel; randomly has this huge projection screen TV showing eclectic music videos)
Service: 10/10 (very prompt service and quick delivery of food)
Salsa: 6/10 (kind of some weak sauce; the only low point in the experience)
Taste: 9/10 (really enjoyed the meal; if the salsa was better it would have been a 10!)