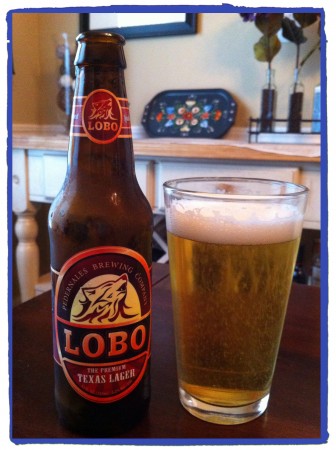 The craft brewing movement continues to expand all over the United States as more and more breweries are springing up. We are even experiencing this growth here in Texas and Pedernales Brewing Company in Fredericksburg is evidence of this growth. Established in 2012, Pedernales already has four, quality beers for us to enjoy. Drawing from well water just below the brewery, these brews truly are Texas Hill Country beers.

To be honest, I wasn’t excited about trying the Lobo Texas Lager since it’s an American lager and not an ale. Along with many other beer lovers, I find the typical, American lager lacking in every way. However, an important fact about this Texas lager is that it’s a pre-prohibition Texas lager based on a recipe circa. 1910, before prohibition had devastating effects on American lagers.

So, when I tasted the Texas lager I was greatly and pleasantly surprised to find so much flavor. It pours a nice, frothy head with medium carbonation. Coming in at 5.2% ABV, this lager is a medium-bodied, crisp, refreshing beer with a nice amount of biscuit flavor.  It’s a perfect beer for a hot day. Congratulations, Pedernales, you’re saving the American lager!

The Classic Hefe-Weizen is also really good. One would expect an unfiltered, wheat ale to be really cloudy, but this one is slightly cloudy and more golden in color much like the Texas lager. The aroma of banana and cloves is wonderful, which is a preview of its delicious flavor. This 6% ABV ale is light to medium-bodied and is really refreshing and easy to drink. My wife said, “Yum, that’s good!” and proceeded to drink the rest of my beer. As I watched her finish off my Hefe-Weizen, I moved on to the Lobo Negro.

The Lobo Negro is a dark brown lager, which means the malted barley has been roasted. This 5.5% ABV lager pours a dark brown color with a light brown head and subtle carbonation. The aroma and taste similarly share nut and roasted cocoa notes that dominate the entire experience. It’s well balanced and smooth. I enjoyed this beer and usually don’t prefer dark lagers. Have some fun one-day and pour it over a couple of scoops of Blue Bell’s Homemade Vanilla Ice Cream.

The Classic India Pale Ale (6% ABV) might scare someone who has yet to acquire a taste for hoppy beers. Surprisingly, this copper colored IPA is more sweet and malty, rather than hoppy, due to the caramel malt. One would expect a more intense hop aroma and flavor since this ale is dry hopped (i.e. when hops are added to the fermenter or keg after the fermentation process). I would have never guessed the beer to be an IPA if given to me in a blind tasting.

Overall, these beers are really good. Thanks to Lee Hereford, Peter McFarlane, and everyone else at Pedernales Brewing Company for producing such fine beers. May all Texans and many others who can get their hands on these beers enjoy them many times over. Cheers.

This post was contributed by local blogger and beer fan Wesley Craig of Wes’ Cravin’s a San Antonio blogger who is on a journey to find, enjoy and share his own experiences and opinions about the delicious food and drink he comes across in the Alamo City. As much as he loves this, what he loves most is fulfilling his calling as a Christian minister and also spending time with his wife Susan and daughter Meadow. Read more articles that Wes contributed to SA Flavor.