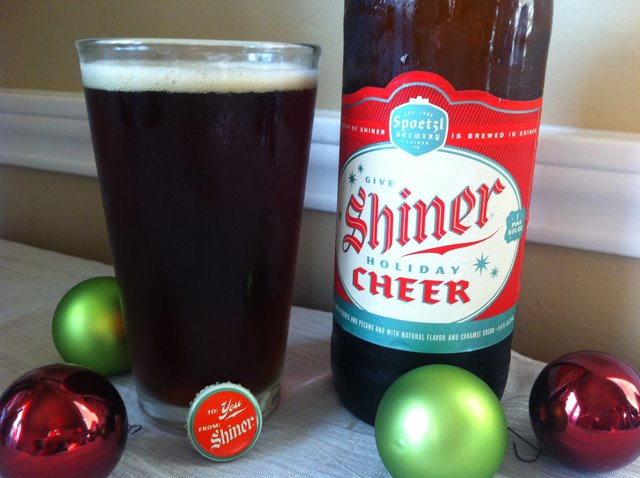 While it may not feel like it outside, the Christmas season is here and so are some great seasonal beers. There’s something exciting about matching a brew with the season and we definitely have a variety of great ones here in the Lone Star State. While breweries all over the country are brewing Christmas beers, Texas offers some fine selections from Houston-based Saint Arnold Brewing Company and Spoetzl Brewing in Shiner. If you want to know what Christmas tastes like in Texas, here are three to try:  Saint Arnold’s Christmas Ale, Saint Arnold’s 2012 Sailing Santa, and Shiner’s Holiday Cheer (all of which are easy to find).

Saint Arnold’s Christmas Ale is a delicious ale that is probably best classified as an old ale (a rich, malty beer like beers long ago) that is brewed using five different malts. It’s full-flavored and well-balanced with a malty sweetness and spicy, hop taste. I’m a fan of this one for sure and it’s not because it’s 7% ABV. It will hug you and keep you warm. That’s if the weather ever gets cold.

Christmas Ale was Saint Arnold’s first seasonal release in ’95, but it wasn’t until recently that the good people in Houston began asking their bartender to blend…that’s right, blend…the Christmas Ale with Saint Arnold’s Elissa, an India Pale Ale. Thus, the blending of the two brought about Saint Arnold’s Sailing Santa. If the Christmas Ale isn’t hoppy enough for you, then give this one a try. This American IPA has one difference from last year’s recipe and that’s the addition of cinnamon. It’s medium-bodied, smooth, and has just the right amount of cinnamon flavor. You can have some fun and blend your own Christmas Ale and Elissa or buy a 22 oz. bomber of 2012 Sailing Santa. I say buy a six-pack of each and blend your own. And that’s coming from someone who doesn’t blend beers or drink the rather common Half and Half or Black and Tan.

A different type of beer and a good choice for a taste of Christmas in Texas is Shiner’s Holiday Cheer. What I appreciate about this Bavarian-style, dunkelweizen (dark wheat ale) is that it’s brewed with Texas peaches and roasted pecans. Of all the things that might get me excited about a beer, the use of local and creative ingredients is high up on my list.

If you don’t like peaches, then stay away from this one because peaches are the dominant aroma and flavor of this beer. Roasted pecan flavor is very minimal. If you’re in the mood for a dark, medium-bodied, and peachy, sweet beer then this beer’s for you.

Whichever beer, or beers, you decide to celebrate with this year. One thing is for sure.  Christmas tastes good in Texas.  Cheers!

This post was contributed by local blogger and beer fan Wesley Craig of Wes’ Cravin’s a San Antonio blogger who is on a journey to find, enjoy and share his own experiences and opinions about the delicious food and drink he comes across in the Alamo City. As much as he loves this, what he loves most is fulfilling his calling as a Christian minister and also spending time with his wife Susan and daughter Meadow.