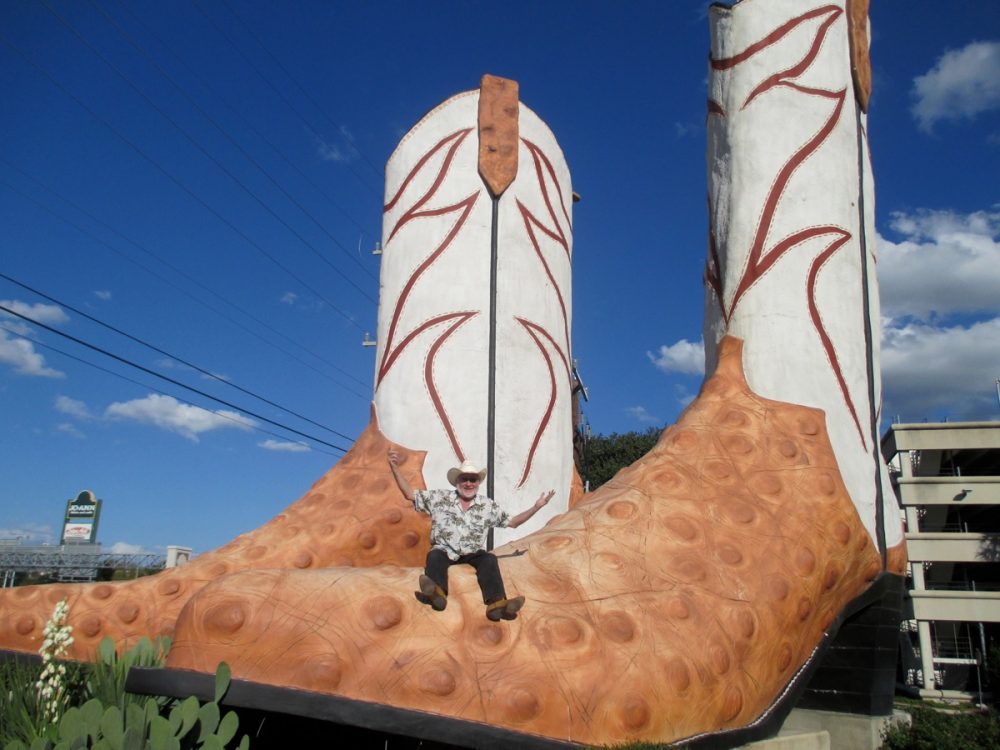 There are some articles you wish you wrote and never got the chance. An interview with the World’s Largest Cowboy Boots artist Bob “Daddy-O” Wade was one of them. Wade passed on December 24, 2019, weeks before his sculpture was to celebrate 40 momentous years on January 16, 2020. Unfortunately, I’ll won’t get the chance to work in his wit, humor and insights into a proper article.

I met Daddy-O last year after Ray Linares riffed on his Giant Boots for a 2019 medal that lit up with stars like the boots do at Christmas. I’ll never forget the first conversation with Wade—after wrapping up a medal release on Facebook live, I got a call from him. We had a lively discussion about the boots, drawing inspiration and public art copyright. While I may have sounded calm on the phone, I was shaking in my normal sized Texan cowboy boots, I can assure you.

We were able to come to terms with me using the likeness of his creation on the medal—the stitching on those boots was pure Daddy-O after all. I’ll never forget the call that I got where I got the all clear to continue with selling the medal. I was at a Mexican food joint with Ray when the phone rang. I went outside to take the call and was greeted with, “Hello. It’s Daddy-O.” This was when the person I had been talking with went from Mr. Wade to Daddy-O—I knew that I was instantly OK.

For the next twenty or so minutes, Daddy-O gave me a bit of a history of himself with colorful stories and language. He talked about growing up in San Antonio, and if I recall correctly, his father was the GM of the Crockett hotel downtown, exhibiting his first piece at Hemisfair ‘68, going on to be part of the scene at North Texas in Denton while missing out on some of the Cosmic Cowboy stuff that was happening in Austin, creating six music playing frogs and their strange path from going to a night club, to a truck stop and a Taco Cabana, talked about the Giant boots, their history and a song he wrote, to making the iconic black Stetson that sat on Kinky Friedman’s trailer as he ran for Governor in 2006 that went missing in a storage building auction only to reappear in the backyard of a Lockhart BBQ joint that, coincidentally, Wade knew the owner.

If that run on sentence seems both eccentric and excessive (and I know I’m leaving out a bunch), it’s only indicative of the type of life that Bob Daddy-O Wade lived. Texans like tall tales, and Daddy-O was an artist who was capable of making works even larger than our collective imagination.

That conversation left me exhilarated, exasperated and with a plate full of cold enchiladas. It’s rare that you get to interact with someone larger than life, and from across time and space Daddy-O was able to inspire me.

What happened next is that I got busy with Fiesta. Then it was after Fiesta and I was recovering from the massive amount of work. Daddy-O’s frogs were featured in the Dallas Morning News and he sent me a copy of the article—turns out he was going to have a book come out as a retrospective of his career. I then went through a lull where I didn’t want to do much of anything, only to ride on a string of business that was too much. Excuses were everywhere and I just didn’t make the time to give Daddy-O a call and do that interview.

Thanksgiving came and went and I texted him to wish a happy Thanksgiving and find out if there was any news on his book. “Sept 2020, all good here,” he wrote. “Boot’s 40th Jan 16-17.” I told him that was awesome and that I saw they got a new coat of paint on them. Naturally, I thought, I will get around to that article in the new year.

But that didn’t happen. It’s cliché, but his unexpected passing was a tough lesson that tomorrow isn’t given, so you better get on with it today. There’s been much written about Daddy-O since he passed by those who have known him a whole lot more than me. However, I’d be remiss to not write something, to tell a little bit about how much I liked a guy that I’d never met in person, but who’s work looms large anytime I’m on 410.