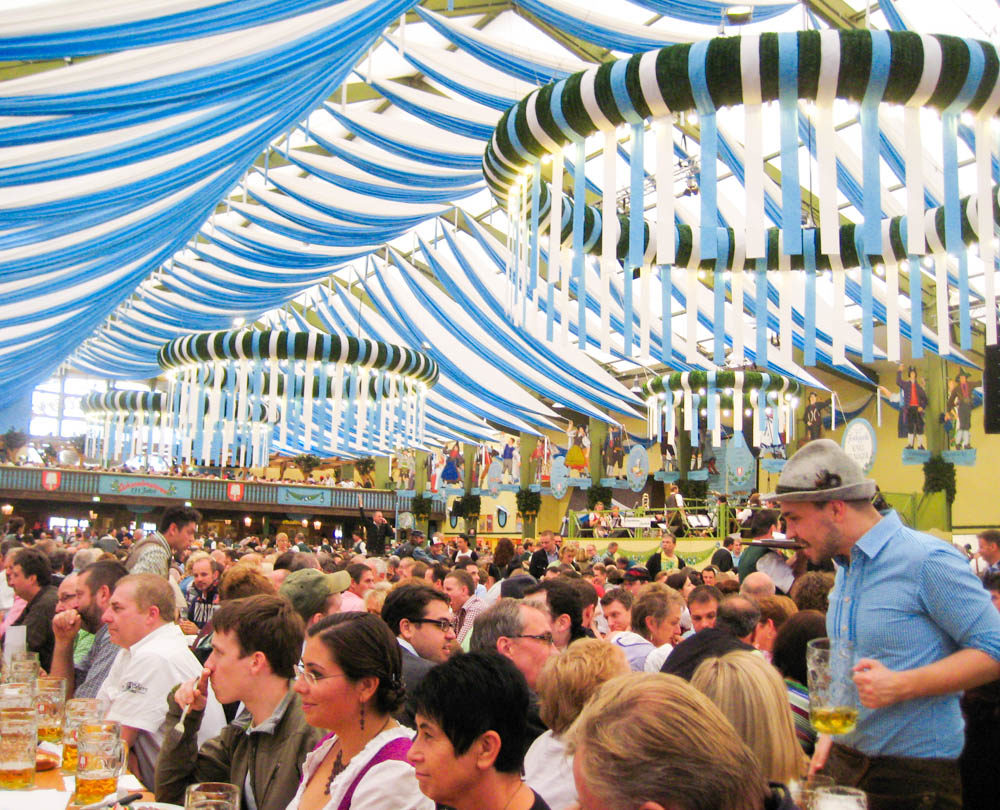 When you think of the traditional Oktoberfest in Munich you probably have images of beer guzzling, massive crowds and lederhosen. These descriptions would not be inaccurate. After all, Oktoberfest is a festival celebrating beer and lederhosen, traditionally worn by Bavarian men during festive events. Oktoberfest brings in over six million visitors each year during its 17 days in operation. I’m not that good at math but I know that’s a lot of people going each day and most of them are drinking beer. This year I decided that for my first trip abroad I wanted to be one of the six million people consuming some of Munich’s finest brews (only beers brewed in Munich can be served) and experience the world’s largest fair in person. I love traveling and I love German beer. It was a no-brainer really.

There is no question that beer is the main attraction and with good reason; however, I discovered there is much more to Oktoberfest than the mass consumption of brew. To me it seemed like there were two festivals going on: the awesome beer fest going on inside the massive beer tents (more like beer warehouses) and the carnival with its wide array of rides going on outside.

Interested in craft beer? Find out more about the beers of the Pedernales Brewing Company, located in Fredericksburg, TX.

While I can’t speak from experience, you probably want to avoid any rides called The Mind Eraser or any roller coasters with no less than five loops if you are coming from any of the beer tents. But what you probably should do is fill your stomach with some food. And boy was there plenty of food. Lucky for me I’m not a vegetarian because it was pretty much the meat trifecta of beef, pork and chicken to choose from out there. Ahh decisions, decisions. Luckily I had a couple of days to spread out all of the options.

First up was the Hockreiters Haxnbraterei stand. Officially this is one of the small beer tents with seating for a couple of hundred people but they also had a stand where you could order your food to go. I ordered the haxn semmel, which is a roasted pork knuckle sandwich on a Kaiser roll. The pork is cooked rotisserie style and then sliced in big chunks. I need to brush up on my German because at first I thought I was eating oxtail, which was available, so I was a little wary. My fears were instantly erased as I bit into one of the most tender and flavorful pieces of pork I had ever eaten. That was probably the best thing I ate in Germany. It was so good I had to have it again the next day. Needless to say, my intro to Oktoberfest cuisine was off to an amazing start.

Unfortunately it was followed up by the worst thing I ate while in Germany, a Schnitzel sandwich from the Wurstbraterei Schnitzenbaumer stand. It was served cold on a roll with a piece of lettuce. This was a disappointment. It tasted like it was straight from the box. And when I say it was cold I mean it was as if they cooked it in the microwave (if they even did that) and stuck it in the fridge for a few minutes to cool off. Yuck, just yuck.

Day two saw me trying a couple of Oktoberfest specialties, Hendl (roasted chicken) and bratwurst. The chicken is cooked rotisserie style and is served in a bag. Now this is what chicken is supposed to taste like. It was juicy, flavorful and served piping hot. Thankfully they provide wet naps and plenty of napkins because this got messy. The bratwurst was quite tasty as well, grilled and served in a baguette.

While those two dishes were savory, the jewel of the second day was not actually meat, but sweet. I tried a fried German pastry called Auszogne from Café Kaiserschmarrn. It had crunchy and chewy elements and was topped with cinnamon and sugar. If you are familiar with Mexican sweet bread, it reminded me a lot of a mix between a concha and a buñuelo. At that moment I swear I was at my grandmother’s house eating some pan dulce that she brought from the bakery. Maybe that’s why I liked it so much.

Leading up to the trip I wasn’t really sure what to expect at Oktoberfest. I had done research but you don’t really know until you are there. Surely thousands of people drinking mass quantities of beer would lead to trouble right (*cough* NIOSA)? I never saw any trouble and never felt unsafe. The vibe was very mellow and most people were there to share a beer with friends, make new friends and just have a great time while singing and dancing. It is also surprisingly very family friendly – one of the days I was there was officially designated as Family Day. Even if you don’t drink beer there is a lot to do there and there was plenty of space to walk around without feeling crowded. If you are ever in Germany in late September, do yourself a favor and swing on by Oktoberfest. It’s a fun time had by all. Prost!

Ray Linares lives in San Antonio and is first time blogger. He is a beer enthusiast who enjoys sports, traveling and searching for the perfect hamburger. He also dabbles in photography and can be found on Instagram @rayzrtx.

Weren’t able to make Oktoberfest in Germany? Don’t worry, Wurstfest is right around the corner! Get on up to New Braunfels in November for all things sausage and beer (lederhosen not required, but highly recommended).