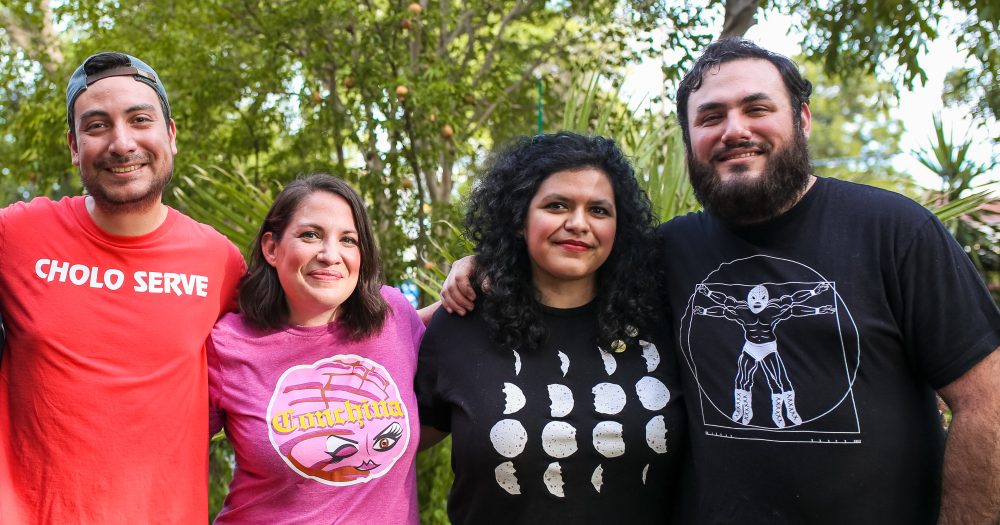 There’s no more quintessential San Antonio Sunday breakfast than barbacoa at your local taqueria. And when it comes to getting decked out in some of the most puro San Antonio gear or checking off that hard-to-shop-for person on your list, you can’t beat the designs created by BarbacoApparel.

In 2014, a team comprised of Richard Diaz along with wife-and-husband duo Nydia Huizar and Matt Contreras started this brand with designs that are hotter than a South Texas summer day. They are one of my favorite brands in town, and I was so happy to sit down and visit with all three co-founders at the same time. BarbacoApparel designs started out as being super niche to San Antonio and Tejano culture (though the designs are poignant to anyone who has spent time immersed in San Antonio), and five years later the team, now including Matt’s sister Catherine Contreras, is looking to expand to become a more statewide brand, though there are some challenges.

Going After the Texas Audience

“The hardest problem in expanding for me has been not being too generic,” Matt said. “We’re trying to find that balance between having our voice and maintaining the brand. Everyone does the shape of Texas image, but we’re trying to put our own spin on it.”

And the results have so far been fantastic. They show Space City some love with both an astronaut that has a taco reflected in his helmet’s visor along with the outline of Texas as a constellation with a space shuttle flying overhead. For those who love honkytonking, there’s a neon sign in the shape of the state with a saguaro over the Western part, a nod, no doubt, to El Paso.

The Home Sweat Home tee, featuring a thermometer bursting at the top due to heat and the word “Texas” melting before your eyes, is appropriate for anyone who has called the Lone Star State home. And the BarbacoApparel take on the “Native Texan” trope is a Texas-shaped tortilla with “Homemade” written inside it.

But the graphic artist of the trio sees another potential hurdle as they grow into a statewide brand: ensuring that they don’t inadvertently take someone’s idea.

“That’s one of my biggest fears, inadvertently making and producing something and then finding out that somebody else already did something like it,” Nydia says. “I just really want to be respectful of everybody’s ideas and everybody’s footprint in the market.”

Statewide expansion is not the only new challenge the team is facing. For the first time in the company’s existence, they are bringing the silk screening production in-house, with Matt and Richard adding a new skill to their repertoire.

“We wanted to have more flexibility in the types of designs we can do and the product we can offer. Some of the printers we’ve worked with only wanted to do huge quantities of shirts, but we wanted to be able to print small test runs of certain things,” Matt says.

The ability to run production in-house allows the team to experiment not only with new designs but also with different styles of production techniques. “It’s cool to be able to play with different styles of tees and different colors on our own when we print stuff,” Richard offers. “When we print on a test shirt, we are able to step back and say, ‘Oh looks cool, but let’s try this other color.’ It’s a lot of fun to play around with it.”

Richard also said that a number of people in the past just assumed BarbacoApparel printed their own shirts. Adding this flexibility will enable the team to take on new business in helping other designers bring their ideas to market.

And as the team has gone through a bit of a learning curve in printing their own designs, their mistakes have been San Antonio’s gain. If a design is a little off center or not quite up to their quality standards, rather than throwing the fabric away the team is upcycling it into new BarbacoApparel items, like scrunchies and pillows.

“My mom retired about two years ago and she’s been harassing me about how she can help with the business,” jokes Matt. “So we put her to work sewing all the pillows!”

With their designs so popular across town and the fact that they are at almost every pop-up you can imagine in addition to setting up at all the many different local markets curated by Catherine through SA Local Market, you might think that the four are pursuing BarbacoApparel as a full-time gig. But as of now, Nydia is the only person working full-time for the business. Matt and Richard still balance having an eight-to-five. But this kind of crunch for time helps spur creativity, with the team saying that many of their best designs come when there is the least amount of time.

“As editors we’re all pretty shy, reserved,” offers Richard. “BarbacoApparel has slowly forced us to go outside of our comfort zone and interact with people more.”

Matt points out that they’ve had to develop new skills and abilities that not only serve them in their personal business but translate to making them more of an asset to their current employers.

“Nydia is a professional graphic designer, as much as she doesn’t want to admit it. Richard is a professional social media manager who’s managing a really large social account. Catherine [Matt’s sister] is now a professional event planner because she does all the big event planning and runs wholesale,” Matt says. “And I’m taking a larger role with screen printing and vendor relationships.”

And while the team specializes in these areas, they all play a role in design ideation, front-facing customer support at events and order fulfillment. They do more with BarbacoApparel after 5:00 p.m. than most folks do in their day jobs.

Thrill of Seeing BarbacoApparel Designs in the Wild

While the team has made every “Best Of” list imaginable in San Antonio and was even named the top streetwear company in the 2018 San Antonio Fashion Awards, all three have remained incredibly grounded, almost humble to a fault.

“So five years in I still ‘fan girl’ when I see someone wearing our tees at the bar, H-E-B or across the city. And when I see them I still want to approach them—and sometimes I do—and say, ‘Oh my God, that’s our shirt. Can I take a picture of you?’” Richard says, visibly excited. “Hopefully I don’t scare them off or weird them out. But, I still get just as excited as I did the first time I saw someone wear our designs.”

Join us tonight at @brickatbluestar for First Friday! ⚡️ [Link in bio for details and to see other upcoming events.]

For Nydia, it is more of an affirmation that people really do like her designs and are not just paying lip service. Yet in spite of all the success, sales and raving fans, she sometimes struggles with imposter syndrome, that nagging voice in the back of her mind that so many successful people encounter that causes her to question her abilities.

“It’s just weird that somebody would actually like something I make. It feels so bizarre that they would spend money on something I designed. I think a lot of it is a result of the fact that I’m learning on the job,” Nydia said, opening up. “I was always interested in graphic design, but I didn’t go to school for it and I didn’t really study it. I’ve learned by tinkering around and watching YouTube to teach myself how to do certain things. I just sometimes have moments of doubt. And it’s always nice to see the enthusiasm that people have when they wear our gear or see us in person.”

For me, this was the biggest takeaway from our entire conversation and one that I asked permission from Nydia to write about. If the designer at BarbacoApparel, to me the hottest brand in town, can express doubt about her skills, it means that it’s all right to feel the same. So if you’re out there creating something, don’t stop. Don’t listen to that voice in your head—keep on plugging away.

After all, if this trio stopped to think that they couldn’t do it, there would be a whole lot less flavor to San Antonio without the incredible BarbacoApparel designs.

Be sure to get your Christmas shopping done now—head over to BarbacoApparel.com to select from their shirts (including ones for kiddos!), stickers, pins, earrings, pillows and more! Prefer to shop in person? Find them at the following holiday markets listed below. You can also purchase BarbacoApparel any time at Karolina’s Antiques on Blanco, Feliz Modern in Olmos Park, Feliz Modern POP at the Pearl Brewery and Whole Earth Provision Co. in the Quarry!