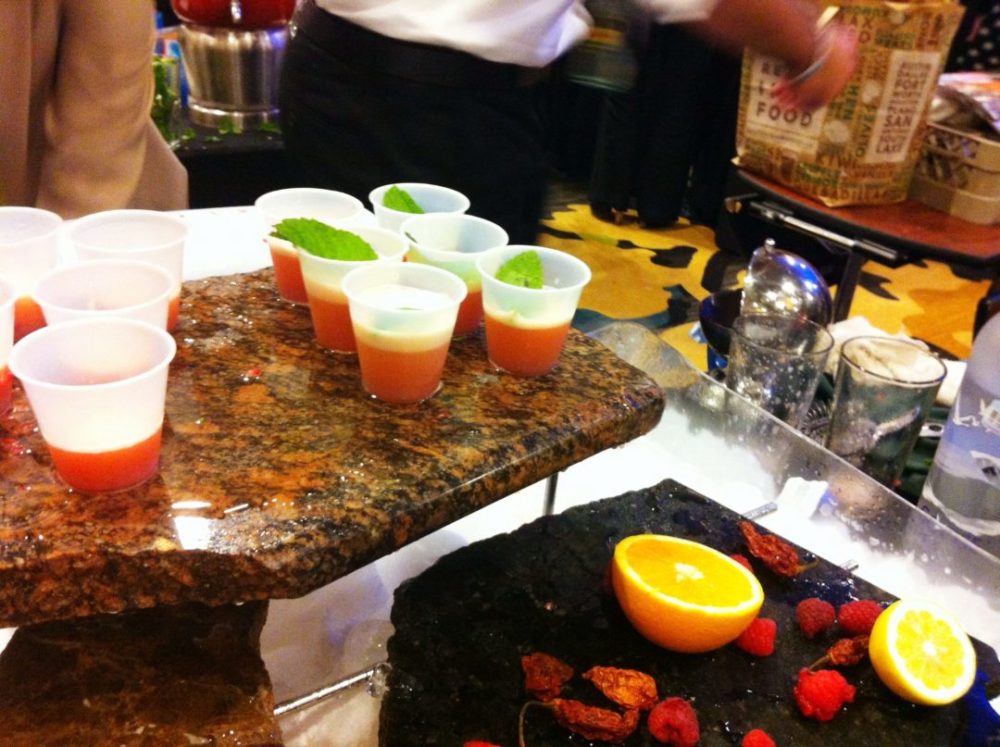 The 4th annual San Antonio River Foundation martini fundraiser, known as Rivertini, took place at the Hyatt Regency last night. This event is one of my favorites in the city, and last night showed why. The room was jumpin’ with tons of people, the live DJ was bumpin’ some good tunes and18 restaurants and bars were shakin’ for the title of the best martini in San Antonio.

The event was $50 and benefitted the San Antonio River Foundation, one of the organizations involved on placing some of the different public art installations along the Museum and Mission Reach of the River Walk. With the admission ticket, you got to eat some good food (sausage, wings and ribs) along with sampling some of the finest martinis mixed up this side of the Rio Grande.

While the martinis were served in Dixie cup sized portions, the concoctions were potent; a handful of Rivertini martinis would equate to a one full serving. With some many competitors in the field, I found the serving size to be just the right amount – and I was feeling good by the end of the night.

The voting this year was confined to only the judge’s table of local celebrities who ended up crowning the Hoffbrau Quarry’s Texas Sunset jalapeño infused martini as the champ.  Unfortunately there was not a “People’s Choice” vote like in years past, so I wasn’t able to chime in with my two cents, but if I could have voted, here is what my ballot would have looked like.

I am not a fan of sugary sweet martinis. I like to taste how the alcohol interacts with the other ingredients, and often times the overly sweet drinks just mask everything. I did, however, really enjoy the El Diluvio from Las Canarias. What made it so delicious is the 1921 Tequila Cream (if you haven’t tried that spirit yet, give it a whirl) in combination with the chipotle/chocolate-rimmed glass.

I was really impressed with Acenar’s martini that combined Hill Country peaches and Serrano peppers. The heat from the Serrano did not go unnoticed – it really took a hold of you with the first drink, but it was smoothed out by the sweetness of the fresh peach. This was one of the best examples of the spicy martinis that seemed to be in vogue this year.

The Esquire delivered with a very tasty cocktail the most reminiscent of a true martini – I was so wrapped up with it that I can’t quite remember the name (or is it because it was so strong?). The cocktail had the Grey Goose vodka combined with the orange flavors of Combier. But what made it special was the interaction between the lavender infused liquor (I can’t remember what that liquor was called!) and the chamomile bitters. The Esquire proved once again that it mixes serious cocktails.

These guys once again proved why they are the champs. The Cork Bar’s martini consisted of raspberries, Grey Goose, pink peppercorn, fresh mint, Topo Chico for a little fizz and the infamous ghost pepper. I was a little apprehensive about drinking something made with ghost peppers, but they somehow cut the intense heat that I have heard this pepper has.  Instead, it had a smoldering heat that was cooled off nicely by both the mint and fizz in the drink.

That’s how this Average Joe saw the competition. As a side note, I am happy they moved the Rivertini back to a venue back on the river again. Hopefully next year the River Foundation can bring back voting to the hoy polloi so everyone can see who the people’s champion is.