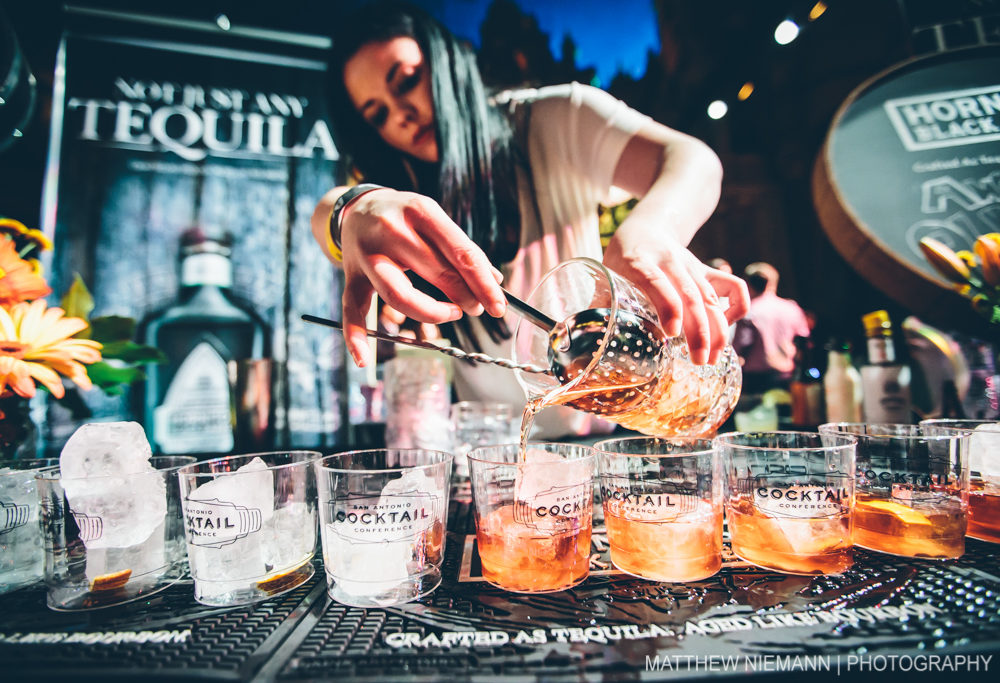 Unlimited cocktails and small bites from local chefs officially welcomed the attendees to the San Antonio Cocktail Conference to town. The elegant Majestic Theatre served as the backdrop for the event that showcased the best of the local food and cocktail scene.

While the event got off to a little rocky start—there was a lengthy line for folks to check in and get set up with the new fancy bracelets that are programmed with an attendees specific itinerary of events—this technological misstep was soon well in the past after the cocktails began to flow.

Let’s go ahead and start with my favorites. The best drink of the night had to go to the Ancho Chile Old Fashioned made by Hornitos. As I learned last year, Añejo Tequila can make an exceptional Old Fashioned, the flavor of the double aged Hornitos Tequila with a little bit of chile made a my favorite cocktail.

There was a battle of Frito Pies at the event, but hot damn, that Hot Joy Frito Pie was one heck of a dish. They used Sichuan peppers and a variety of Thai spices, and while the item is no longer on the Hot Joy menu. They took it off because they felt Frito pie kind of “over” last year when the New Yorkers were doing it (side note: Frito pie is never “over” here in Texas—I don’t care if the King of England is eating Frito pie, I’m always up for it). I can only hope that it returns, or they at least give me the recipe.

If you read my article on the 7 things to do at this year’s conference, you got my pro-tip that there may be a cigar roller outside the lounge on the second floor. We made a bee-line for that area and I was able to get my first ever cigar rolled in front of me.

Trying to hop onto the city’s love of our team, Dulce Vida Tequila created a drink called the San Antonio Spur. This was one of my favorites—it had Blanco Tequila, agave nectar, tonic syrup, lemon juice, raspberries, lemon peel and basil. It was refreshing and fruity (without being too fruity) and I loved the basil finish.

Humble House Foods was once again in the house and served two outstanding bites—either of which could have been tops for the night had that Frito pie not been there. There was a smoked trout that was roasted with a torch and served with lemon aioli and pickled veggies that was great. But I favored their take on grits and grillades where they used sweet potato grits, beef cheek and lengua and tamarind hot sauce. It was sweet and savory and I’ll be learning how to make sweet potato grits here in the near future.

One of the few “standard” drinks was the Redemption Rye Old Fashioned—straight forward, boozy and tasted like it should. I’ll have to give this Rye whiskey a second look later.

La Condesa of Austin made the trip down I-35 and served a Sikil Pak (go ahead and click the link, I know you don’t know what it is either!). This mashed up pumpkin seed dish served with habanero wasn’t playing around like cocktails that have that pepper listed as an ingredient—these guys put some real-deal habaneros on it that would light you up, but man oh man, it was balanced by the rest of the bite to calm down a bit.

You can’t go to the party without drinking the signature cocktail. Although Milagro isn’t one of my favorite tequilas, it did mix well with in the Beso de Agave that had a little smoky flavor from the Montelobos Mezcal. Not my cup of tea exactly, but it’s cool how the conference created a drink with a unique flavor.

Sampling the smoked duck and pork boudin from The Cookhouse made me pause and want to smack myself at the realization that a year passed from their outstanding dish in 2015 and I haven’t stopped by for dinner yet. They proved yet again that Cajun cooking is one of my favorites.

Licor 43 made something called a Carajillo, basically an iced espresso drink with their aromatic liquer that had vanilla notes to it.

The Tuna Poke from Folc was straight-forward and reminded me of my trips to Hawaii as a consultant back in the day. I can’t think of any higher praise to give this dish!

While I can’t tell you much about this Reyka Vodka drink—it was towards the end of the evening—I can tell you that these guys won the award for the bartenders having the most fun!

Finally, I have no idea what this guy was doing—he had a contraption that looked like a science experiment and the line was too long.

Check out all of the SA Flavor Cocktail Conference coverage from this year and year’s past.