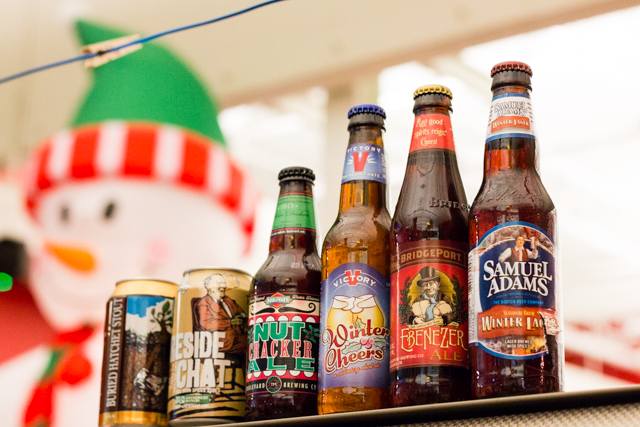 San Antonio is seeing the craft brewing movement explode. Consequently, I feel that many San Antonians, including myself, are opening their minds to trying more craft beer options. While I have been apt to purchase new brews, I often fall back on some of the old favorites. Then I was able to join the Six-Pack Club.

This group was started by a couple of guys at my company as a way for folks to try new beers. Each person is to bring a six-pack of beer that corresponds to the theme of the month. For example, September was Texas beers, October was Oktoberfest, November was potluck (your favorite beer) and the meetup for December is winter warmers.

Everyone sets their beers on the table, and there are numbers placed into a bag for people to draw. So if there are fifteen people participating, numbers 1 through 15 are placed in a bag for people to randomly draw. Number one gets the honor of picking the first beer, and as you work down the list the last person gets to pick two beers in a row, on the turn, so in our example round one would go 1, 2… 13, 14, 15. Round two would start with 15, 14, 13… 2, 1. It then snakes again at the top of the order, similar to how a Fantasy Football draft is done.

If you have at least six people in your office, you can put together your own Six-Pack Club. More than getting to drink good beer, you are able to collaborate and interact with people across your company in different roles. I find it enjoyable to learn about why a person selected their beer and which other ones are there favorite.

For those people who are newbies to a Six-Pack Club, here are some interesting observations I have made:

Last month, one of my favorite beers that I was introduced to was Brown Shugga’ by Lagunitas Brewing Company out of California. In fact, I became mildly obsessed, driving across town to locate the illusive six-packs (many places had already sold out). I was so impressed with the brewery that I reached out to them to see if they would supply a bomber or two for a bonus raffle after we all chose our beers. To my surprise, they really hooked us up with three different bombers, three normal beers, three shirts (it says “In dog beers, I’ve only had one”) and some posters! If you haven’t had Lagunitas, you have to check them out—especially if you can find the Brown Shugga’!

For December, I chose to bring the Victory Brewing Company’s Winter Cheers. I was introduced to Victory Brewing Company when the Dish Trip team came into San Antonio from Philly; I really enjoyed the Summer of Love beer, so I thought this seasonal brew would be good. However, I have blatantly violated my own rule as I have yet to try it out, but we will see if I am able to draft it any way. Who knows, I might even get lucky and get one of the Lagunitas bombers as well. I will be sure to post my haul after the event, and if you have some folks around the office who love beer you should consider starting a Six-Pack Club yourself!

Here is my December haul! I drew number 6 out of 17 and was able to get one of the 21st Amendment’s Fireside Chat. Definitely looking forward to that one!

I ended up with the following beers in this order:

Since January is chilly, next month’s theme is going to be beers with ABV greater than 8%. Be sure to leave a comment if you do this at your place of work!