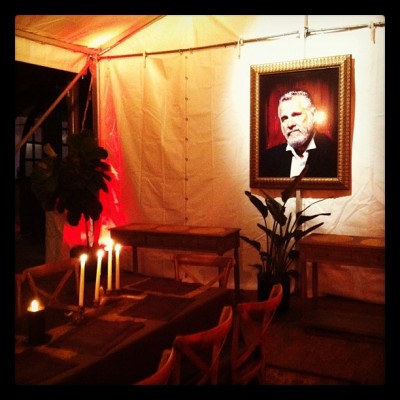 While I have failed at growing a beard this past month, I was still up for the challenge to attend Dos Equis Most Interesting Academy. This event at Sunset Station had spots where I could receive training to help me become more interesting in an effort to shore up my résumé for the Stay Thirsty Grant – a $25,000 prize to help fans experience their most ambitious adventures. The training included log-rolling, fencing instruction, quicksand survival and exotic scorpion cupcakes. Seriously.

The night started off with a fantastic dinner by Wolvesmouth Chef Craig Thornton. Based in Los Angeles, Thornton hosts small groups of people at what he calls a Wolvesden, more of a dinner party than a restaurant. Chef creates eclectic plates with combinations that are extremely interesting, and hosted a dinner at the Most Interesting Academy. The first dish was one of my favorites, and excellent rib-eye cap, which was some of the best meat I’ve had in a while. It was served with a coconut soubise and compressed cucumber along with peanuts coated with sweet coconut brittle.

The cheddar fritter was outstanding; it was like a high-end carnival fare, a light and fluffy hushpuppy with a crisp crunch on the outside. It had a dollop of Anaheim chile sauce that tingled the tongue with a bit of heat. The meal ended with a Vanilla Genoise, a sponge cake with a tangy lime curd and raspberry pop rocks. The pop rocks were going off in my mouth and it felt like firecrackers to end this amazing eight-course meal. Now that I was full, it was time to go to check out some of the events.

The log-rolling event was intense. Participants had to maintain balance and try to knock their competitor off of the spinning log. The winner was to receive a scorpion lollipop. After that, you could go inside an explore your inner creativity with a pop art experiment in the style Barbara Kruger; you got to assemble words and images into art that would be worthy of hanging in the best museums.

If that wasn’t your style, you could wander over and learn how to master birds of prey, get an exotic henna tattoo, sketch different burlesque models or get a trim at the barbershop. Returning outside, there was a station with confections make of crickets, larva and scorpions; these creations were all gone when I stopped by, but I heard some people say they tasted like chicken.

The Alamo Fencing Academy was on hand to provide instructions on the art of fencing, shoring up your skills of hand-to-hand combat. However, the most amazing event to me was the quicksand survival class. Hint: just keep moving. While one woman got stuck in the entrapping mixture, San Antonio Jane was fleet-footed and able to skip right across.

Entertainment was everywhere at this event. There were people walking on stilts, roller-skating, drumming and belly dancing from the Austin based Jezebelles. A random Chinese dragon performance happened a couple of times in the evening and plenty of masked waitresses were waiting to fill up your Dos Equis cup. The crowd was treated to performances by San Antonio’s own Girl in a Coma along with the headlining act, Black Joe Lewis and the Honeybears. In short, the Most Interesting Academy was one of the most unique events that I have ever been to.

Although the Most Interesting Man in the World was unable to attend, we were in good hands with Dhani Jones, former NFL linebacker and star of Travel Channel’s Dhani Tackles the Globe. Jones was there to talk about Dos Equis’ Stay Thirsty Grant, a chance for people to win $25,000 to bring their most interesting dreams to life. If you have something amazing, like say serving Jellyfish Salad to royalty, this grant is for you. The deadline for submission is October 9th, and if you weren’t able to be at the event, you can go through their online training course now! 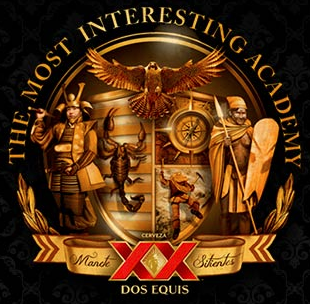 I will never reach the bar that the Most Interesting Man in the World has set, but that is OK, because I learned one thing. I don’t often stay up until 3AM on a weeknight, but when I do, I prefer the night to get started at the Dos Equis Most Interesting Academy.

Please note, Dos Equis provided me and a group of friends with VIP admittance to this special event.