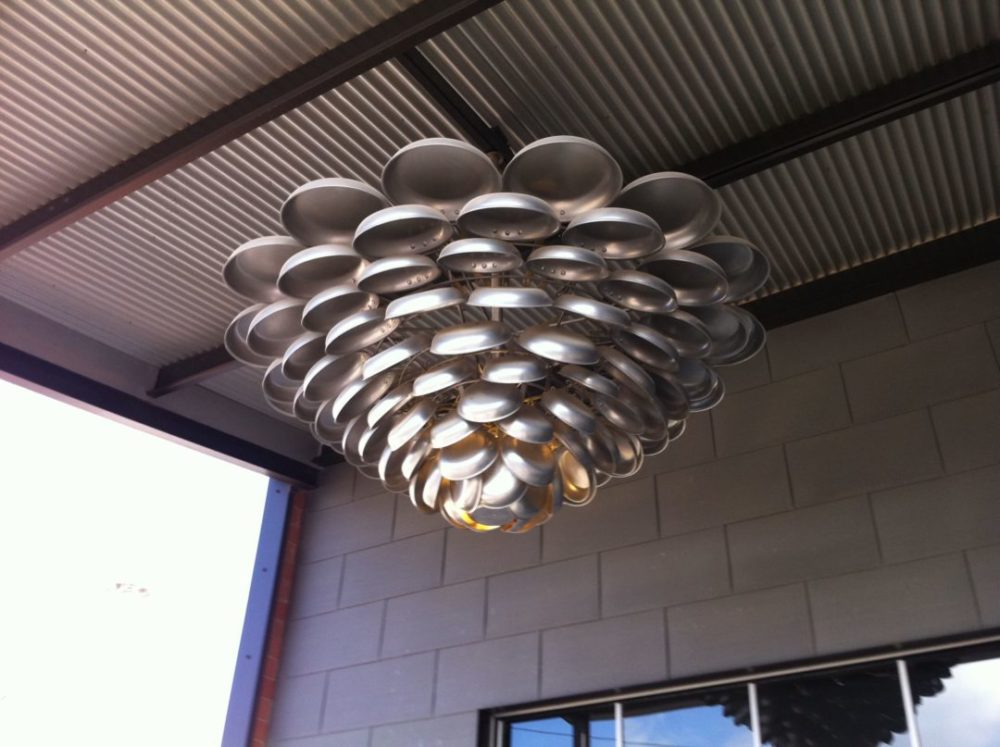 Many people don’t view San Antonio as a college town, but there are some fine institutions here in town.  Adding to the mix is the San Antonio campus of the Culinary Institute of America (CIA) which became an official branch of the institute in 2008 in the Historic Pearl Brewery.  This month saw the local branch offer an Associate Degree in Culinary Arts where students could transfer to the Hyde Park campus in New York to complete their Bachelor Degree.  I was asked to become a student for a day at the institute to get a glimpse of what the Associate Program was all about.

I was more than a little apprehensive about coming on campus and donning a chef’s coat and hat.  I am a far cry from being efficient in the kitchen and many of my adventures find a way of going awry.  After confirming with the CIA representative that it was OK for someone lacking culinary skills to become a student for a day, I made my way to the kitchen early one Tuesday morning.

Edna Arango greeted me at the door and I was to be in a class of journalists and media types which included a prominent former TV personality, a professional food writer, a radio personality, and two folks from the San Antonio Visitor’s Bureau.  If we were playing the Sesame Street game of “One of These Things is Not Like the Other Thing,” I would have stuck out due to my lack of journalism and food experience!

We quickly got dressed and met Chef Michael Katz who was giving his students a live demonstration of how to prepare Mayonaise and Hollandaise sauce.  Chef told his students how both of these items were some of the most difficult sauces to prepare, and then looked over at us visitors to let us know that we would be preparing them later today.

Our group then took a tour of the facility where we got to see the outdoor kitchens, the different pits to prepare barbacoa and other dishes cooked in ground, the library where students study, the bakery/pastry kitchen and the different demonstration kitchens where visiting chefs could record programs for the students.  The institute wants to provide as much hands on education as possible so that student can actually work with food in different ways which is far superior to reading about it in a book or watching it on a video.

While there is a Latin American research center that focuses on how iconic Latin dishes are prepared by locals of that region, the Culinary Arts Program is committed to giving a broad education on all the different types of cuisines. Yes, San Antonio does have a strong Latin America influence, however, at the CIA students gain knowledge on how to prepare all types of cuisine from French to Asian and everything in between.

After the tour, I was paired up with Michael Urbana, a student who has had a passion for food his entire life and currently works at the Tower of the Americas as a server.  I wanted to make sure that I didn’t let him down and was prepared to do my best at making the Hollandaise sauce.

I started working on the double boiler by whisking the eggs, trying hard to get the “ribbons and trails” (you know you have the right thickness of the mixture when you whisk it and can see the bottom of the pan for a split second before the mixture falls back, “ribbons,” and when you drizzle some of the mixture on top of itself it sits for a split second before absorbing back in, trails).  We took the mixture off and began adding clarified butter, just a couple of drops at the start, to make the emulsion.  You do this just a little bit at a time to mix the fat in with the protein to get the creamy sauce.  Adding too much will cause the sauce to “break” where the fats (butter) clump together and separate from the protein (eggs).

I had a good sauce going, but my arm became tired.  At the end, I added the last bit of butter and realized that it was too much.  The sauce broke.

After all that work I was so distraught!  I had such a great sauce going and then in a blink of an eye it was done!  I think that part of the reason that this happened was that I had some egg mixture at the top of the bowl that was not getting mixed in so I had too much butter.  Another reason could have been that I added the butter too fast at the end.  Whatever the reason, the sauce was kaput.

I believe you learn more from your mistakes that your successes.  In a way, I am glad my sauce broke because I got to actually see what made it break instead of reading about it.  I’m confident that students of the CIA learn just as much from their failures as their successes and it appeared to me that the Chef instructors are there to help them through these mistakes, provide them explanations why it didn’t work and ultimately coach them how to do better.

This is what I loved about the CIA the most – the explanation of the cooking process.  I geek out on science and loved some of the more scientific explanations Chef Katz gave to his students to explain why something works instead of just having them parrot back a recipe.

Many of you might wonder what it takes to become an actual student of the CIA.  Although not stated in the official application, I think first and foremost you have to have a passion for eating and preparing food.  If my experience from this day was any indication, I can tell you that you are not going to breeze through the program and will encounter adversity.  Without having that underlying passion, it will be difficult to overcome the difficulties you are sure to encounter.

As far as official requirements, the CIA mandates that you must have at least six months of hands on food preparation in a professional kitchen or bakery working with fresh ingredients for at least 10-15 hours a week.  Believing that experience is the best teacher, the admissions office wants prospective students have the perspective from a real world kitchen to ensure that their image of a chef is grounded in reality instead of reality TV.  Additionally, students must complete an application and provide letters of reference to be admitted.

The cost for the two year program is roughly $14,000/semester, which includes ingredients and supplies.  There is a very generous scholarship called the El Sueño Scholarship which awards up to 50 percent of program tuition for students who qualify based on need.

Finally, I would be remiss to not discuss the best part of the day, family style lunch.  Food that the students have prepared is served to the students, teachers and staff and it is dang good.  Every day, the students get to sit down and eat well so keep keep in mind that you will not have to purchase lunch for the next two years while working on your associates degree.  Somehow, I will have to find a way to mistakenly wander into the CIA during lunch hours just so I can eat high on the hog again!

If you are looking for a career in the food industry, you should explore the Culinary Institute of America here in San Antonio.  You will learn from some of the finest instructors on how to prepare dishes from around the world at a world class facility.  The campus is available for tours and you can reach out to Shannon Gerome at 210-554-6400 or by email to schedule your tour today.