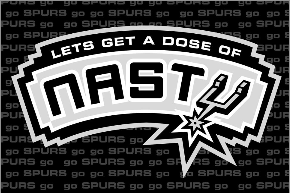 San Antonio Spurs Coach Pop set off a national firestorm of controversy when he decided to send several of his starters home after a grueling road trip instead of facing the rested Miami Heat team. Shortly after a squad of primarily bench players lost 105-100 to the Heat, NBA commissioner David Stern fined the Spurs $250,000 for “resting players in a manner that was contrary to the best interests of the game.”

While a shrewd move by Coach Pop to give his guys some rest, it may also be a way to thumb his nose at a league that seems to have issues with our small market team that consistently wins. Here are a survey of articles on the national level both supporting and decrying Coach Pop’s decision.

While everyone is debating this issue, I’m sure Coach Pop just wants some more nasty as the Spurs take on the Bucks tonight at the AT&T Center tonight.

Be sure to let me know your thoughts in the comments.