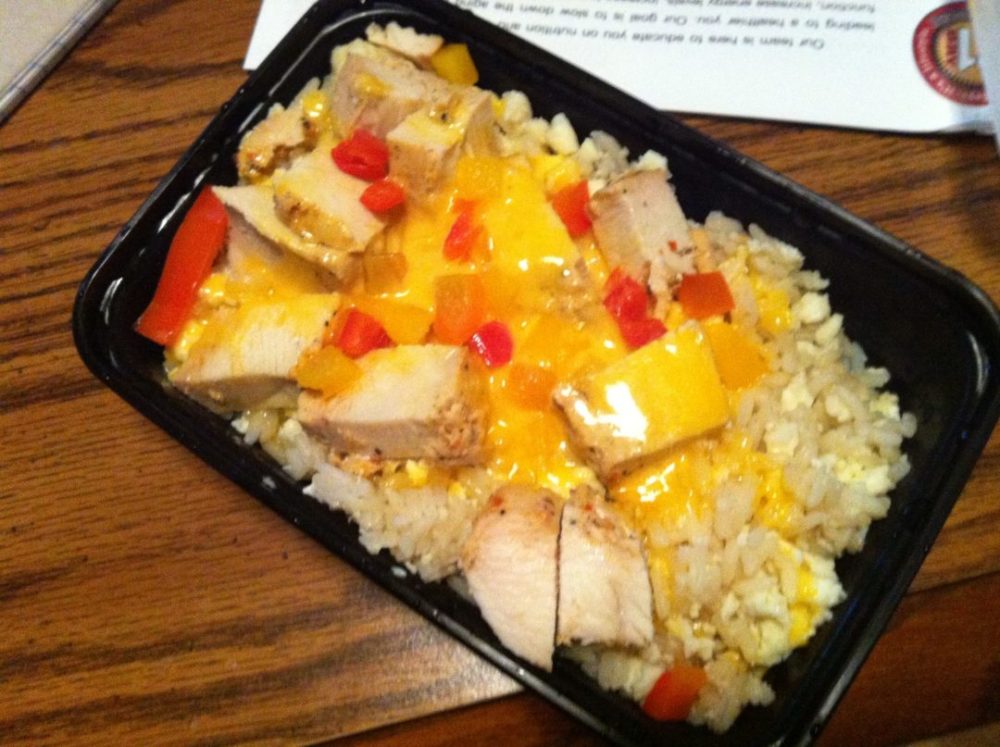 I completed my second week of the My Fit Foods 21 Day Challenge this past Saturday.  I was extremely excited about my first week of results and looked forward to tackling the second week in the challenge.

This past week was interesting because I started getting into a groove.  My cravings had diminished and I found myself not pining for non-healthy food as much (I would be lying, however, if I told you the cravings went away completely).  A key reason for this is the support system that I have been fortunate to have both in and out of work.

If you are going to do the My Fit Foods 21 Day Challenge, it is imperative that you have folks who are cheering you on.  I love the communal aspect of food; getting to eat and converse with friends and family is what makes dining (and in particular dining out) so much fun.

I eat most of my lunches during the work week with my buddy Frank who has been bringing his lunch as well throughout this challenge.  It is key to visit with someone over lunch because I need that break from the daily tasks, deadlines and meetings.  Moving forward, I plan on bringing my lunches four days a week and I am glad that I have a friend who I can count on to keep me honest.

Outside of work, I have been fortunate to have my girlfriend (who is also participating in the challenge) cheer me on.  When I do have those cravings to stop the challenge and snag a pizza, she is the one who helps reel me in.  I look forward to getting to take her out for meals once or twice a week in the future, however, I realize that I don’t have to go out for every meal.

In addition to the spoiled lunches that I forgot as I went to work, I wasted countless loaves of bread, deli meat and fruit because I wouldn’t pack my lunch.  In short, I didn’t care if I left my lunch because I could always go out.

This past week, I was cruising down the road towards I-10 when it hit me.  I left my lunch at home.

In the past, I would have said, “Forget about it!” and marched into Lula’s to get a plate of chipotle enchiladas.  Unfortunately, this was not an option and I did a U-Turn to go back to my house to pick up the food.  Every morning I go through a routine of looking for my wallet, badge to get into work, keys, and phone.  Now my lunch has become part of this ritual which is a huge accomplishment and hopefully a precursor for future success.

There have been a couple of negatives, however, that I have noticed on week two.  For one, while I am happy most of the time, there has been a day or two where I was a little grouchy.  I don’t know if this was due to the fact that I felt that I was confined and could not go out to eat or if it was because I was hungry.  All I know is that I was irritable a couple of days.

Additionally, I have notice that at night I really get tired around 10:30PM.  I think that this is a function of the fact that all my calories for the day have been consumed by 6:30PM and my body is shutting down.  This has been difficult for me to adjust to because I do have some entrepreneurial activities that I work on late into the night.  I will note, however, that it is probably good that I am getting tired at that time because I am more likely to get a full night sleep.

In case you were wondering, the cheat meal this week was at my friend Amy’s house where she made an amazing spread of Mexican food from Cooking Light for a bunch of folks.  I was able to cut back my portions from what I would normally eat and had a fish taco, a steak taco, some black beans, Mexican rice, and a small dessert.  Here’s to going strong on the final week!

Stats
Exercise: Sunday ran 3 miles, Monday ran 3 miles, Thursday refereed an outdoor dodgeball tournament for 6 hours
Caloric Intake: Not taking into consideration of the cheat day, averaged about 1,780 calories a day for a 6’ 1” guy (it was weird because some days my total was in the low 1700s and others it was in the 2000s so I didn’t feel that this week was balanced; the average is also low because I did miss a lunch one day because I woke up late on the weekend)
Weight: 191.0 (lost 1.4 pounds from last weigh in of 192.4 and a total of 4.4 pounds; have to admit I was a little disappointed that my second week’s loss was half of the first week)

Foods I Loved
One of my favorite meals was the Turkey Loaf which is basically several slices of turkey meat loaf that is really spicy.  While nothing like Mama Lee’s meatloaf, this is a pretty solid healthy alternative.  It’s a bonus that you get to have it served over the delicious mashed sweet potatoes.

The Breakfast Tacos redeemed themselves! This week they were not overburdened with cumin and I really liked them.  San Antonians know their breakfast tacos and I would be curious to see what you think so be sure to leave a comment.  I also am a fan of the Mix & Mash breakfast which is cubes of chicken mixed with eggs and rice topped with tomatoes.  The only thing that would make it better is if they diced up a jalapeño with it.

Foods That I Thought Were Good
The black beans were really good and I decided to kick them up a bit with some extra hot red chile powder from New Mexico.  My only beef with them is that they are on my meal plan for a morning snack.  I don’t know about you but I don’t really think of black beans as a morning snack.  I had a hard time getting this out of my head as I ate them.

I liked the Tenderloin and Veggies because the mixed vegetables were a welcome replacement to the peppery spinach from the Ninja Tenderloin.  I will say, however, that I am not a huge fan of the seasoning of the tenderloin.

Foods That I Did Not Like
The big item that I did not like this week is coincidentally one of the best sellers at My Fit Foods, the Lemon Turkey.  If you recall, I had this item on the first day at a gas station while driving back to San Antonio.  I wasn’t a fan of it then either, however, I thought this was due to the fact that I was salivating for the fried chicken that surrounded me.  It turns out that I just flat out don’t like it.  The Lemon Turkey is too salty and not filling for me.