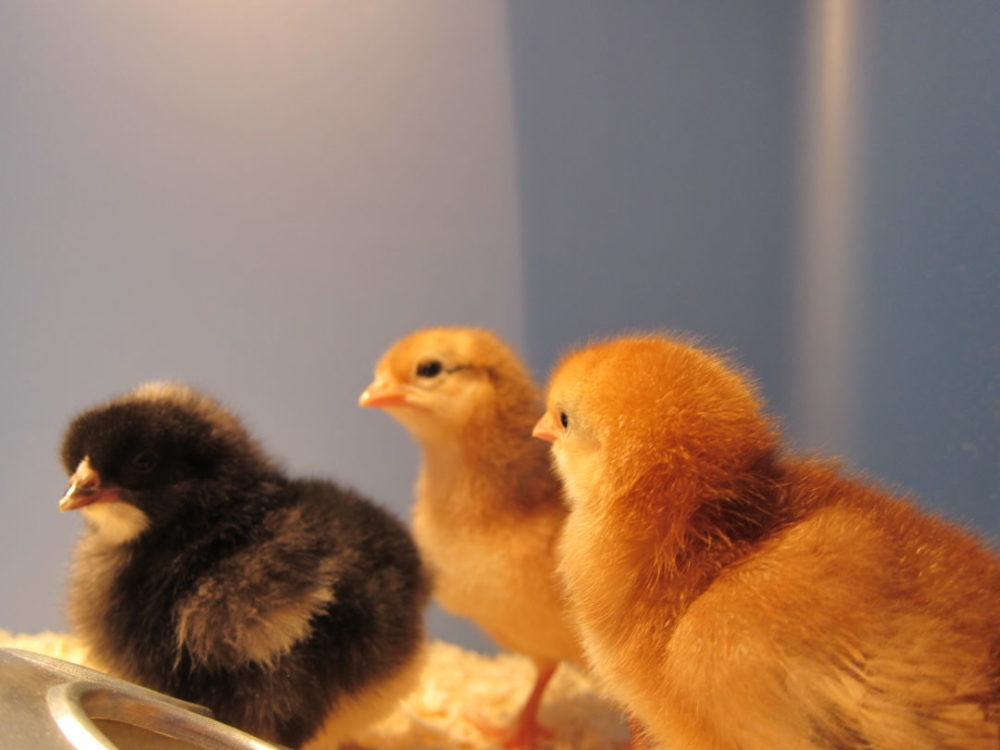 This past Thursday our house became the home to three baby chicks. After researching different breeds, my wife picked up two Rhode Island Reds and one Plymouth Barred Rock chick at New Braunfels Feed & Supply. After having the chicks for less than a week, I can finally understand why so many people post pictures of their children to Facebook: you think that every little thing that they do is adorable.

Before bringing the chicks home, it is important to have everything set up for them to be comfortable. This means have a box with softwood shavings, food, water and a lamp to keep them warm (our book said it should ideally be 90 degrees). Initially, we bought a 250W heat lamp bulb and fortunately San Antonio Jane tested it out – had we put the chicks in their new home we would have quickly had fried chicken. Instead, we found that a 75W bulb worked just fine (just make sure that you check the heat from the lamp with a thermometer because you may actually need a higher wattage bulb). My wife also used some sticks to make a roost for them to play on.

Initially the chicks were very loud – they were squawking and chirping away. After they got used to us, they quieted down but would still chirp quietly. Apparently fowl are very social animals and they like the company of others. I’ve found this to be the case with our chicks; if we now remove one to hold the others will chirp loudly.

There was a pretty large debate in our house on what to name the birds. Forgetting that hens are indeed female, I had a long list of male-centric names and had to go back to the drawing board. My wife came up with the names of Ruby for the all red chick and Tallahassee for the red one with marks; I ended up naming the black chick Shiner.

Being around the chicks has been a lot of fun and it is strange to see their personalities already come out. Shiner is the smallest and while the others peck at her, she still likes to make sure she is nearby the action. Tallahassee was the chick that initially ate and drank first and can often be seen stretching. She is the chick that likes to be held the least, and she can often be found pecking at the other two. Ruby likes to be at the center of all the attention and when it comes time to sleep she somehow manages to worm her way in between the other two chicks. My wife has always been a proponent of free range chickens and eggs, and after seeing how much personality they have I can now understand why.

Whenever the chicks get tired they sort of stand in one place and start wobbling. Eventually they will flop over into the wood chips and go to sleep. The chick might stay asleep for a couple of minutes before another one wakes her up. There is this constant cycle between sleep, play and poop.

One of the fun parts of the chicks is getting to hold them and play with them. While Shiner and Ruby both like being held, all three enjoy it when we lay down and let them walk around on us. Protip: you better have a towel between them and your clothes because they poop a lot. The chicks should be in our house for the next five to six weeks and then we will move them out to the coop. You can already see some of the fuzz falling off and feathers coming in; they just grow up so fast.

Garrett and his wife are raising urban chickens, for more on their adventures check out the other articles in the For the Birds series.