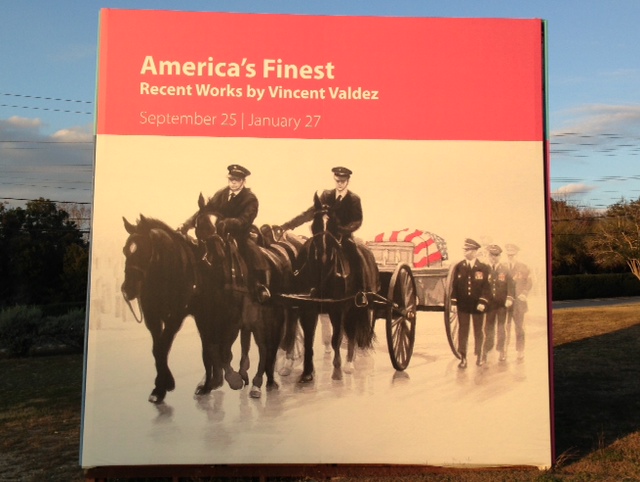 On rare occasions are exhibitions both timely and timeless, but Vincent Valdez’s America’s Finest exhibit at the McNay Art Museum manages to accomplish both. Viewers who have not seen the show have through this weekend before the show comes to an end on January 27, 2013.

The exhibit is divided into two physical parts at the back of the Stieren Center for Exhibitions. On one side are portraits of boxers, a recurring theme in Valdez’s work, that represent the minorities and different ethnic groups that have built America. On the opposing wall, Valdez quotes the inscription on the Statue of Liberty about America taking in the the unwanted, to come and build a new life in a new country. With all the talk about immigration these days, these works are a reminder that we are indeed a country that is built on immigrants, many of whom were bloodied and bruised while they gave their all to our nation.

In the other room are pieces focused on a different kind of sacrifice, those of our soldiers. In this room, the viewer is confronted with different pieces revolving around a soldier by the name of John. There is a large, extremely realistic painting of the soldier looking off to the side, blasts in the sky behind him. In his eyes is a certain amount of anguish along with a sense of being withdrawn from the moment.

To the right of the viewer is a stark, large horizontal piece that is divided into two halves. The top half is completely white, while the bottom half is black; it looks representative of a ribbon that a soldier gets for their uniform signifying the war they served in. Upon further inspection, you can see that the dark portion of the piece is composed of different soldierr’s names.

Behind the viewer are some relatively small pieces, all scenes from a soldier’s funeral. In most of the pieces there is a casket with an American flag draped over it. In one of the first pieces, a horse is pulling the casket with military personal alongside it; the scene makes the viewer question whether this is in the past or the present time. Other scenes, such as the casket passing in front of a meat market, gives context that this funeral is taking place in San Antonio; in another piece the casket is alongside a VIA bus, signifying that the funeral is occurring in the present day.

I had noticed the docent talking to other visitors, so I went over to visit with him about the exhibition and to find out more about John. The docent told us that John was a friend of Valdez, and that the docent’s daughter went to school with both of them. John had served in the recent war, and when he came back he was extremely distraught, ultimately taking his own life. The artist decided to create these works as a reflection on his friend.

Often, we like to segment things in our life; going to a museum in which the artists are so far removed from our city, our time and our lives results in an experience that can be more academic than moving. This exhibition strikes a chord closer to home with the viewer, particularly those from San Antonio.

Being a military city, most of us know or work with veterans. We see active duty military members flying in and out of the airport. War has been all too real to our society for the past ten years, and many in our city have experienced loss. This exhibit is masterfully put together by Valdez; one that leaves you enamored by the talent of the artist across a variety of mediums while feeling sadness for the loss of our men and women in uniform.