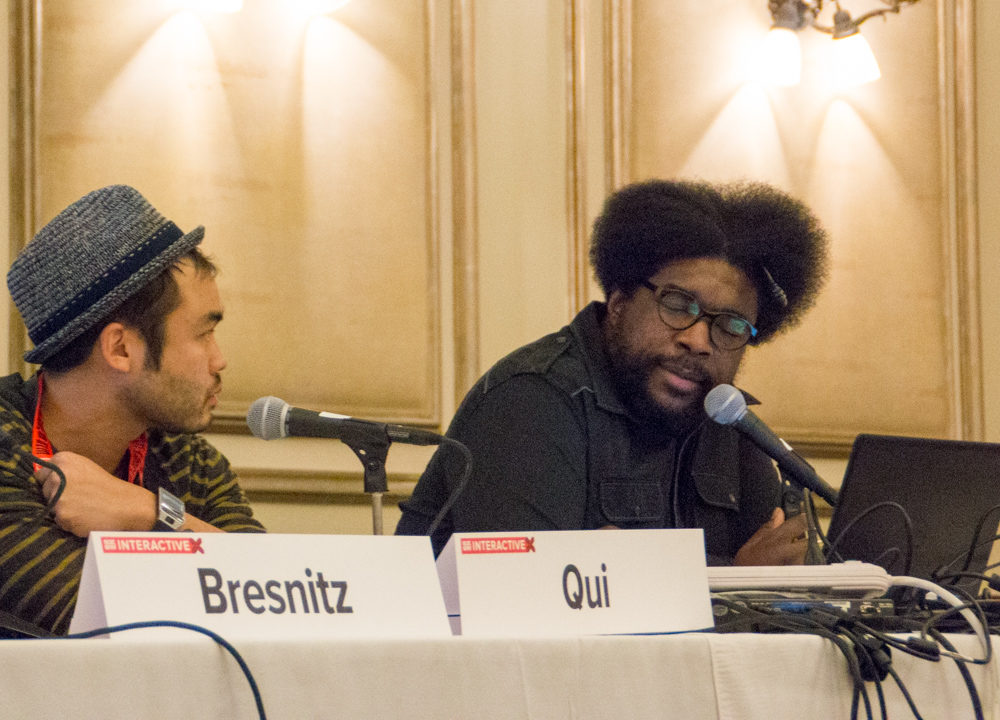 There are always spectacular panels at SXSW, but my favorite are those that juxtapose thought leaders from seemingly disparate fields. This was the case with this SXSW Southbites panel called Life’s a (Dinner) Party: Channeling Culinary Creativity featuring Questlove, drummer for The Roots the house band now for the Tonight Show, with Paul Qui, notably of Eastside King, Qui and Top Chef Texas. The panel was designed to explore how food influenced the creative process of each of these individual.

Well before he became the house band for Jimmy Fallon, Questlove revealed food was incredibly important in the matriculation of The Roots. “The first thing that we did with our record label was that we begged them for a large budget so that we could hire a worthy 5-star chef,” he said to the crowd’s laughter. “No seriously,” he went on, “because the first two jam sessions nobody would come, but once the word got out that we had Philadelphia’s best chefs making free food, suddenly I was calling the cops on myself to get people out of my house.”

The meals helped build that cohesion that ultimately led to the success of not only The Roots, but also individual talents who collaborated with them, such as Jill Scott, Mos Def and Talib Kweli.

Food is still a driving force not only for Questlove, but also for him to build a creative community. Paying homage to the way that ideas were once created, refined and discussed, he began hosting Food Salons in his apartment, what he called “kind of like a high-brow potluck.”

“I have cultural leaders and thought leaders come to my apartment and I also have a few James Beard worthy chefs come make stuff,” he said. “The whole goal of it is less of a dinner party and more of a social gathering where comedians and chefs and reporters and singers and artists all get together and connect.”

Currently the Food Salons are extremely exclusive, but Questlove sees his movement growing outside his network of friends and peers. Similar to the scene that Warhol instituted at The Factory in the 60s, Questlove would like to find a loft space to host more accessible Food Salons on a weekly basis. “I really want to figure out a way to mix the three… the music and the food and with art and bring it together.”

Although Paul Qui has spent his entire career in Austin, his draws on many themes and memories—in addition to being challenged by his mentor.

“Most of my inspiration for food—I think I’m a little bit crazy as far as chefs go—but I try to pull from everything all the time. A big part of my chef upbringing definitely was at Uchi here in Austin [with] Chef Tyson [Cole]. He would send me ideas for food, but then the idea could be like a color pallet, like different shades of yellow. Something different like that where you could think outside the box.” This was a particularly fascinating concept, that a chef would use a color—and the feeling that a particular color could evoke—as a way to determine a menu.

A story familiar to many chefs, Qui draws on the memories from growing up and eating his grandmother’s food. But he repeatedly emphasized about being inspired by what his peers are doing. Rather than being dismissive or derisive of his competition, there is a deep admiration for other practitioners of his craft, a sense that a rising tide raises all boats.

“A big part of what Qui [his latest restaurant] is, is collaboration. It’s the same idea that Quest is talking about bringing people together,” Qui said. “It’s about creating that culture and for me it’s about cultivating those ideas that get me really excited. I don’t care if the idea is mine, but if it comes from that space I get super excited.” At this point any sense of nervousness from the mild-mannered Qui was gone; he was genuinely getting amped up in front of the crowd and you could feel that energy.

Travel and Leisure recently broke the news about Otoko, the 12-seat sushi restaurant that Qui that opens this summer. Acknowledging that it doesn’t make a lot of business sense to open a restaurant with the limited amount of seats, Qui was clearly excited about the new venture.

“The way I judge projects is whether I’m going to go into them is whether it excites me or not. [It’s] not necessarily about the bigger paycheck… it’s about creating something big,” Qui said. “All the best sushi experiences that I’ve had have been really personal. Most sushi restaurants serve a few hundred people a day and make a few thousand pieces of sushi, and that’s not the best way to showcase that. But when you have it in such a small space, you make it right away and hand it to the guest. For me, that’s an important part of service and sushi is the one thing that you have to eat right away.”