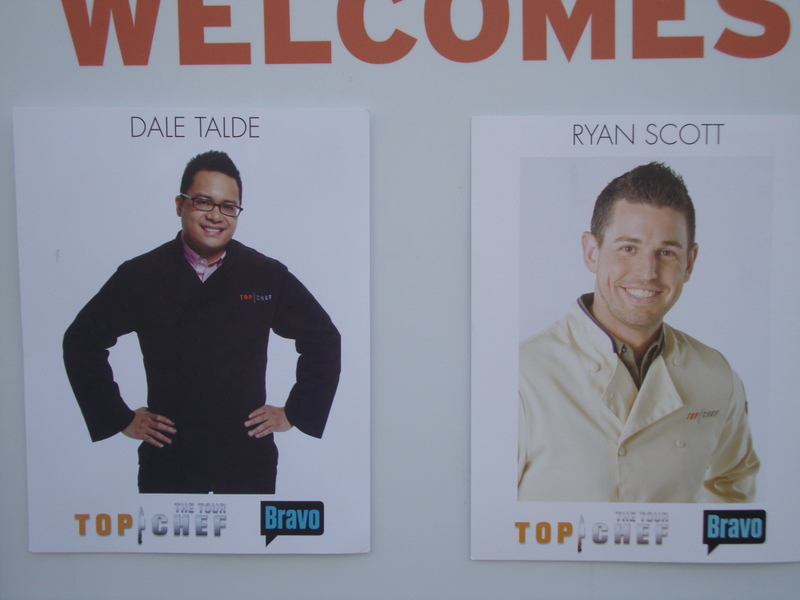 Fans of the Emmy Award winning show Top Chef on Bravo know that the competition gets hot and heated. My visit to the live event Top Chef Tour at the HEB Alon Market in San Antonio was hot, primarily due to the typical South Texas June weather outside. Regardless, it was a lot of fun at this event.

The event pitted two contestants from previous seasons in a cook-off.  Chef Ryan Scott, an enthusiastic and fervent personality from Season 4, competed head to head with chef Dale Talde, a more subdued yet passionate and competitive young chef from season 8.

The combination of these personalities was amusing and fun to watch as they bantered back and forth, told juicy show secrets and even divulged information about whom they think should not have won in past seasons.  Our host, Fred, was a great moderator and brought the conversation back to what we love most, the food!

The cook-off ground rules had each chef create a unique dish in the span of 15 minute using up to ten ingredients.  Additionally they were required to use one ingredient chosen by Top Chef Facebook Fans. In true Texas spirit, the San Antonio Facebook Fans wanted beef.

To make each dish unique, the chefs also got to use a secret ingredient of their choice. Chef Ryan chose watermelon while Chef Dale chose fish sauce. Upon hearing about the secret ingredients, I was thrilled and anxious to see what they came up with.

The 15 minutes flew by as both chefs explained how they would be preparing their skirt steak dish. Seated in the audience, I immediately smelled the variety of aromas coming from each side. Ryan was whipping up something tantalizing using chiles (jalapeños perhaps), green onions and watermelon. Dale’s section had an Asian flare as he mixed his ingredients using coconut, corn, sweet onions and lemon zest.

After the time was up, the three judges had to decide who would win the round. The panel of judges included Charlotte Samuel, HEB Alon’s Cooking Connection chef and manager; Jennifer McInnis, food writer for the San Antonio Express News; and Johnny Hernandez, head chef and owner of La Gloria, the establishment recently voted as San Antonio’s best new restaurant.

After all the judges got a taste the dishes, each audience member also received samples of the two dishes.

Ryan’s use of beef was not like anything I’ve tasted before. His infusion of beef topped with a salsa medley of chiles, onions, capers and watermelon were spicy and fresh, perfect for a South Texas summer day.  Dale’s dish was equally refreshing. His recipe was served with a slice of tomato on the bottom, then the beef cut, and finally topped with corn, toasted coconut and a hint of mint.  I could see how this would be a tough decision for the judges, as both samples were enjoyable to the palette, but ultimately Dale’s dish was victorious.

I really enjoyed getting to go to San Antonio’s Top Chef Tour event and was able to not only get a variety of cooking ideas but also meet and visit with exemplary chefs from around the nation.

Special thanks to the folks out at Foodspotting for providing us with a couple of tickets to the event!  The Top Chef Tour will continue its travels to Los Angeles, California with other great chefs.  If you’re inspired  to do a little cooking yourself, give Carla’s Pastel Diplomatico recipe a try!